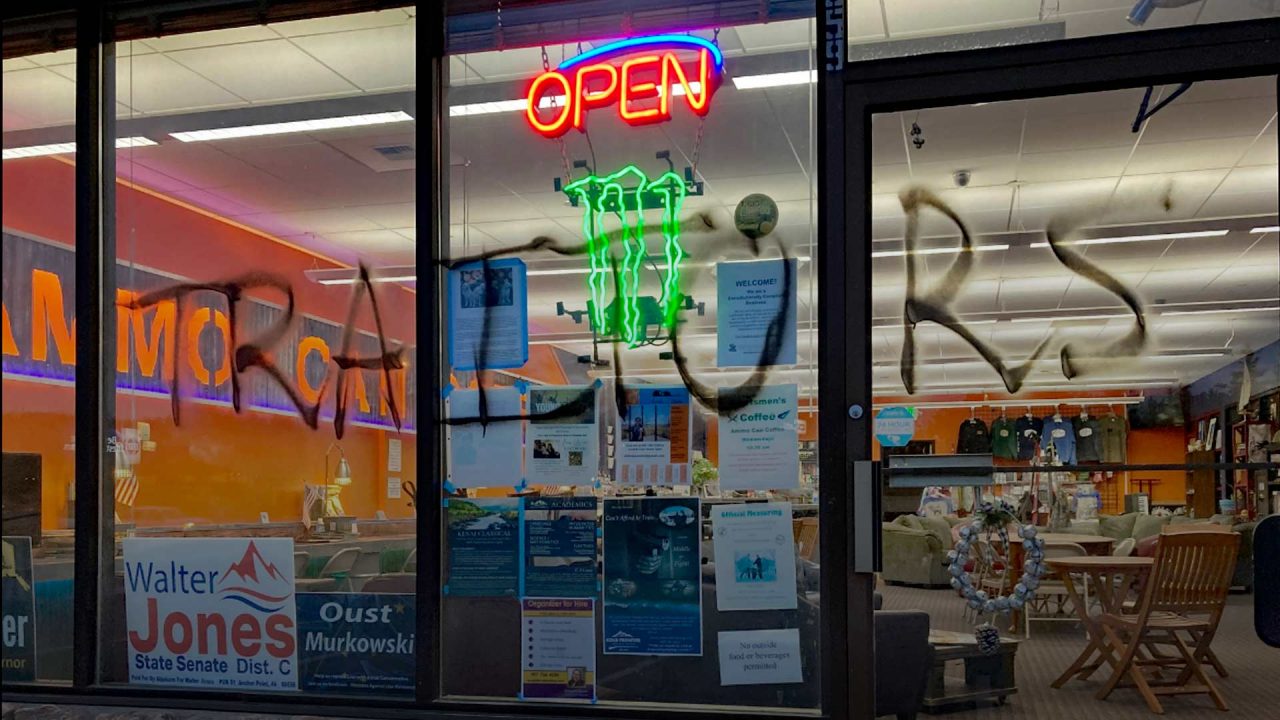 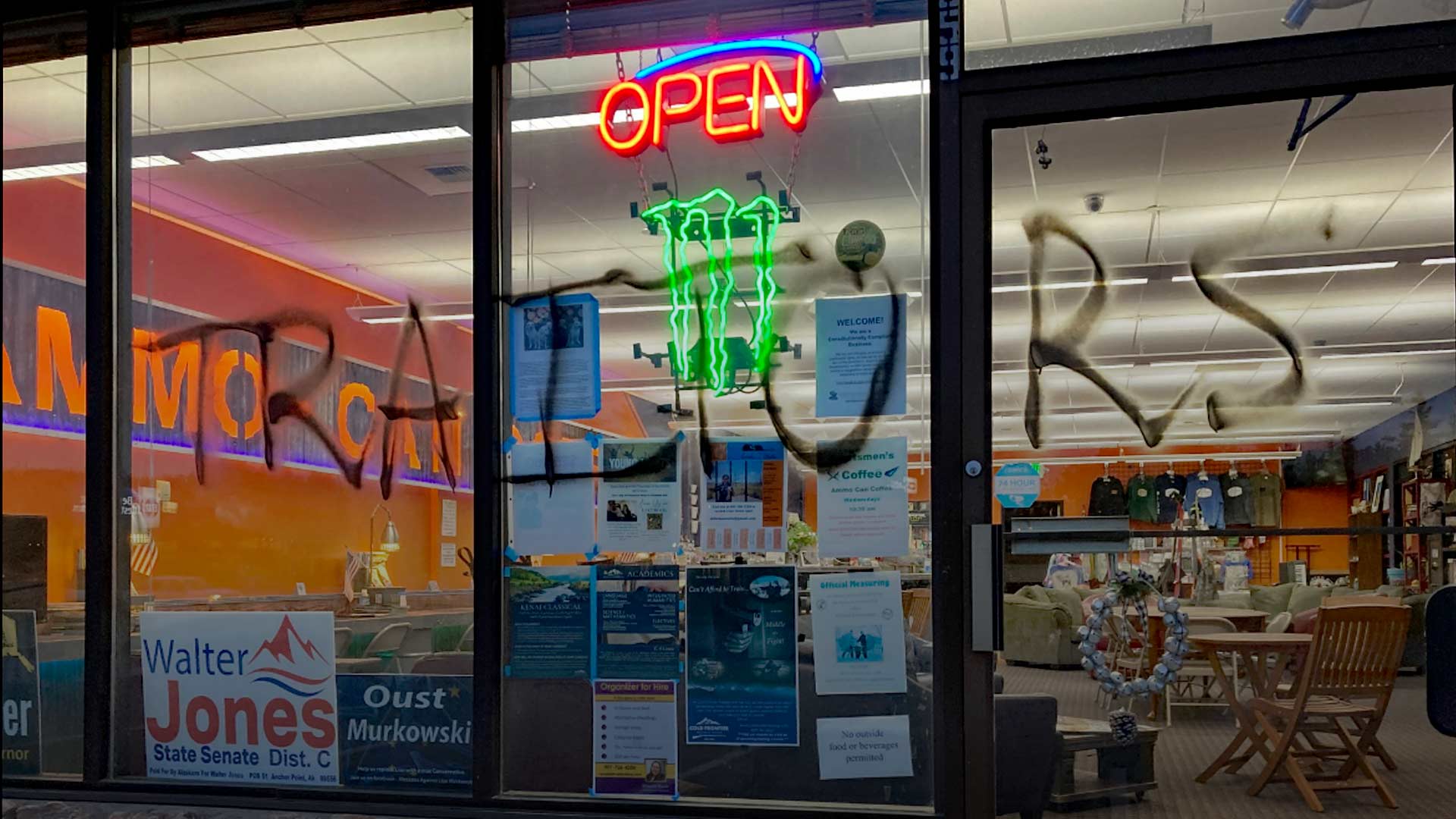 Ammo-Can Coffee, a wildly popular cultural and social club/coffee shop for conservative-minded, faith-filled Alaskan patriots on the Kenai Peninsula, was vandalized around 1 a.m. on Aug. 8.

Owner Jason Floyd posted a notice on social media, saying his family was seeking information about those who attacked the family-owned business.

“The coward spray-painted the word ‘TRAITORS’ on our windows and super-glued our door-locks,” Floyd reported. “No other business in our building was vandalized. This was a targeted attack. The police are investigating. The video is being reviewed, and more information concerning the individual responsible will be posted as it becomes available.”

Floyd said the damage amounted to a couple hundred dollars. He was able to open the shop on Monday and people have been stopping by to express solidarity and support.

“This was a very calculated thing,” he said in a phone interview. “The video showed a man that the building manager thought was probably in his 30s wearing a hoodie. He came and walked up and down in front of the shop about one o’clock in the morning and was on his cellphone and then decided to go ahead and tag the building.”

If the goal was to intimidate him or his family, Floyd said the plan was a major failure.

“Honestly, they are really myopic in their activities because it doesn’t accomplish what they think it will,” he said. “People like us who are already outspoken are not intimidated by it. We are emboldened by it, and those who follow us as supporters – it emboldens them!”

“It’s the weak-minded folks who don’t have any good arguments and don’t want to participate in the public forum and actually have a conversation,” he said. “They are useful tools for much smarter people who wield them from the shadows.”

Ammo-Can has become ground zero for conservatives living in and around the Soldotna-Kenai areas, providing a venue for meetings, rallies, entertainment, political functions and business gatherings. The company’s mission is to serve as a private cultural and social club that “celebrates and promotes the Judeo-Christian foundations of the United States of America and Contemporary Conservative Culture, offering a respectful and relaxing environment; designed to build faith, family, friendship and knowledge.”

​The company now has an official membership list that includes more than 3,000 individuals. It’s free to sign up to anyone who supports the club’s mission and makes the following three acknowledgements:

— All freedom, liberty and one’s right to self-determination flow from God and shall not be infringed by any man.

— Personal Sacrifice on behalf of the innocent, vulnerable and helpless is the highest form of love a person can demonstrate.

— Where one voice may be easily silenced, many voices raised together in righteous solidarity must prevail.

Floyd’s Facebook post following the vandalism stated: “Those who stand for the Truth are many. Those who seek to intimidate through fear and violence are few. Who will stand with us?”

He added the following:

Hate never strengthened a cause.

Hate is a dirty cloak of indignation masquerading as righteous anger.

Hate exists as a means by which to destroy everything that does not serve its purpose.

Hate is a bigot, who is emboldened by ignorance, fueled by greed, and motivated by entitlement.

Hate has a face envious and evil, operating in the shadows, in secret, and in the masked spaces of social anonymity.

Hate is a drunkard, sloppy, urine-soaked and foul-mouthed; unsteady in its devices, and powerless when opposed by resolved sobriety.

Hate is a dim-witted, morally bankrupt bully, who when confronted with facts and reason, having no intellectual tools with which to respond, easily devolves and responds in rage, vandalism, and violence.

Hate is an easily manipulated coward, a simpleton, often directed by others, who only acts publicly when backed by the ignorance and force of a mob.

In the end hate is a hollow, self-serving liar, elevating itself above all other ideas, needs, pursuits and causes.

As for me and my house we will serve the Lord. We will not bow a knee to the hate in this world. We will not back down. We will stand for truth. We will hold the line and resolve to push ever harder against those who hate.

​​In addition to free membership, Ammo-Can offers a paid membership option for those interested in premium benefits, and in helping build the Ammo-Can community.

​Services include access to the 2,800 square-foot Soldotna-based headquarters, which is decorated in patriotic themes. The facility includes an espresso bar with non-alcoholic beverage service and food, a multipurpose stage offering weekly live-entertainment, a state-of-the-art virtual reality gaming system, a decked out private conference room with a 55″ smart TV, video conferencing equipment, dry-erase board, HD LCD projector, an 80″ screen and more.