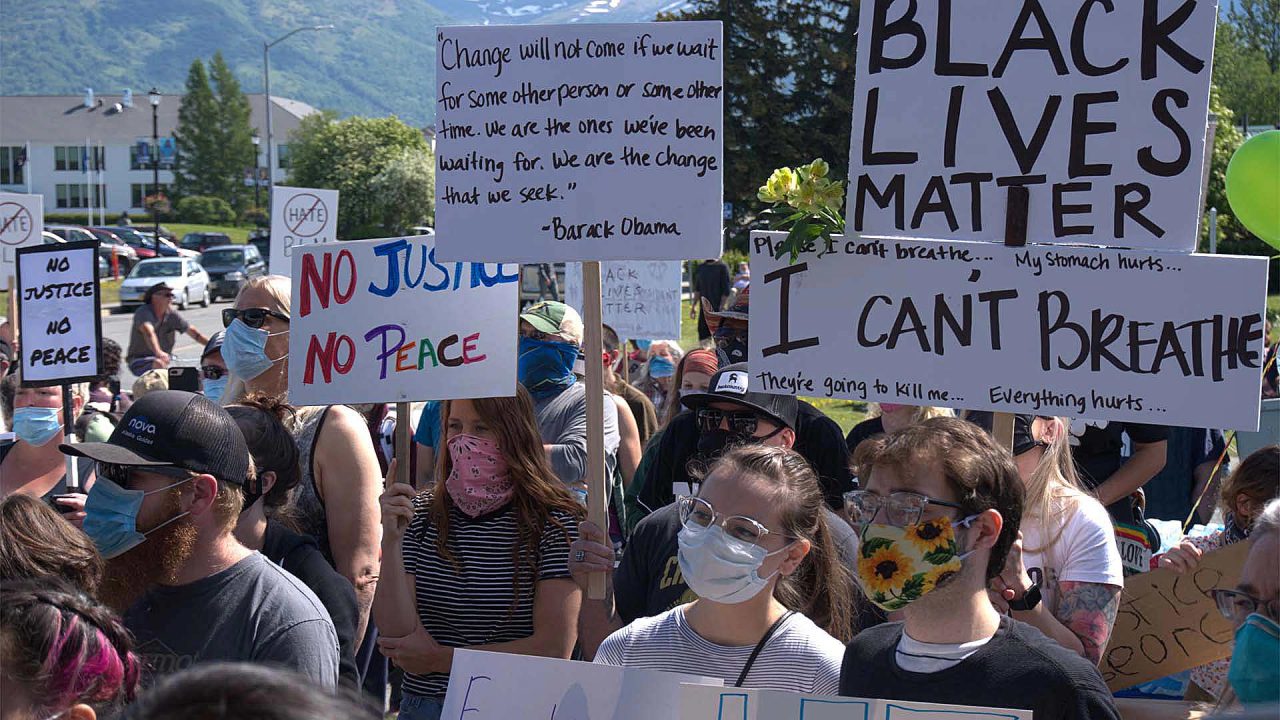 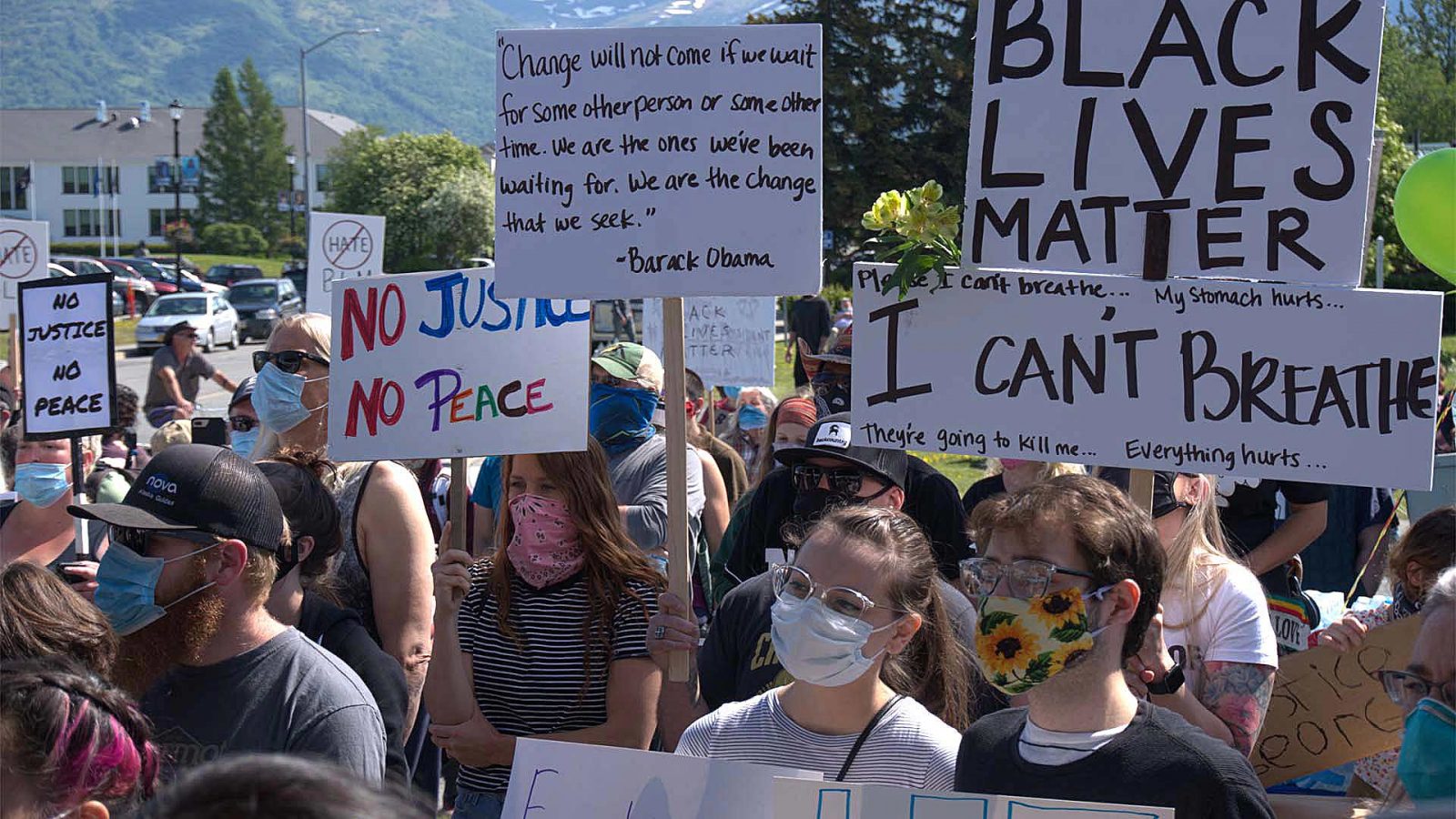 More than a thousand protesters filled the streets of downtown Palmer for a Black Lives Matter march on Saturday. Chanting, “No justice, no peace,” and “Racist cops have got to go,” marchers carried homemade signs as they filled the sidewalks and spilled into the streets of the small town. There were no reports of vandalism or violence. 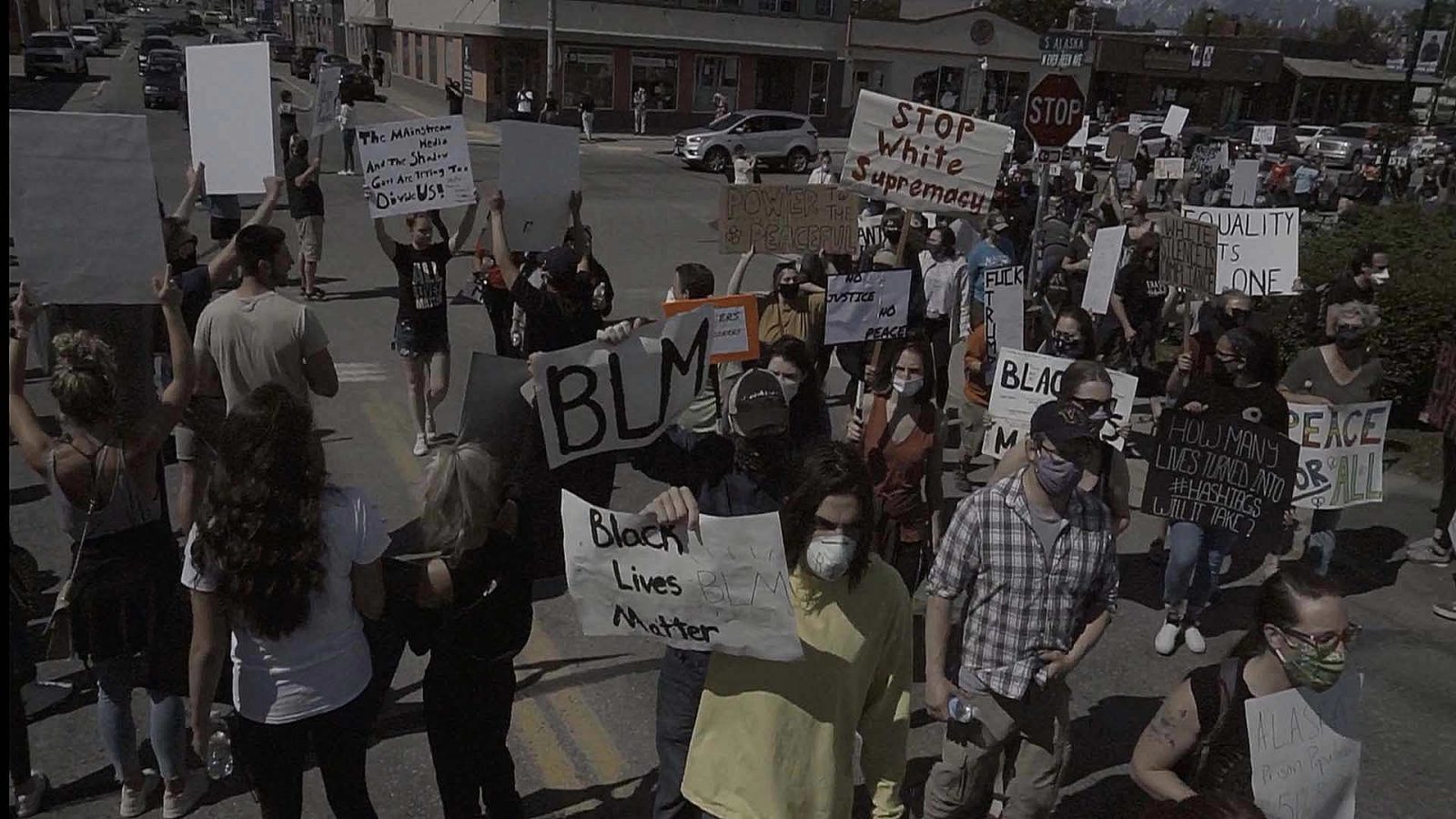 Protesters gather on June 6 in downtown Palmer for a Black Lives Matter march.

Before taking to the streets, protesters gathered to hear speeches near the Palmer Depot. Speakers shared stories of hidden and less overt racism in Alaska, and highlighted instances of police brutality at the national level.

The march took attendees past the Alaska State Trooper station in Palmer where some marchers cursed a half dozen troopers watching from the station’s parking lot. At one point a young woman approached the officers for a peaceful conversation.

One protester walked with a handgun strapped to his leg. Another stood in the middle of the street blocking a police car for a couple of minutes with his hands raised in the air.

Organizers had a permit to use a downtown pavilion and to march along the sidewalk. The crowd eventually took over part of the street and filled a major intersection in downtown for several minutes. While many attendees wore facemasks, social distancing was not a priority as they packed together, shoulder-to-shoulder, for several hours.

In the lead up to the event, there was misunderstanding about the intentions of a local group that showed up to make sure the march remained safe. Affiliated with 907 Freedom, the group was led by Luke Howard who is running for State House this year.

A Facebook post by Howard encouraged 907 Freedom members to attend and ensure the rally did not turn violent from outside influences. He said he would carry a concealed handgun, and asked others to peacefully observe the march from a distance.

Before the rally, Howard and others walked the streets to guarantee there were no bricks or rocks along the route. They also gathered with protest organizers to pray.

“The only thing that brought us down is community,” Howard said. “That’s it. We had prayer with them this morning. Everything is tight, everything is good.”

Following the march, Howard and others from 907 Freedom spent time talking with protesters about there experience with racism and the need to address racial tensions.

Speeches before the march included accounts of people being called names because of their hair or skin color as well as experiences of racial slurs, stereotyping and racist jokes and looks. Most of the speakers were young adults and recent high school graduates. 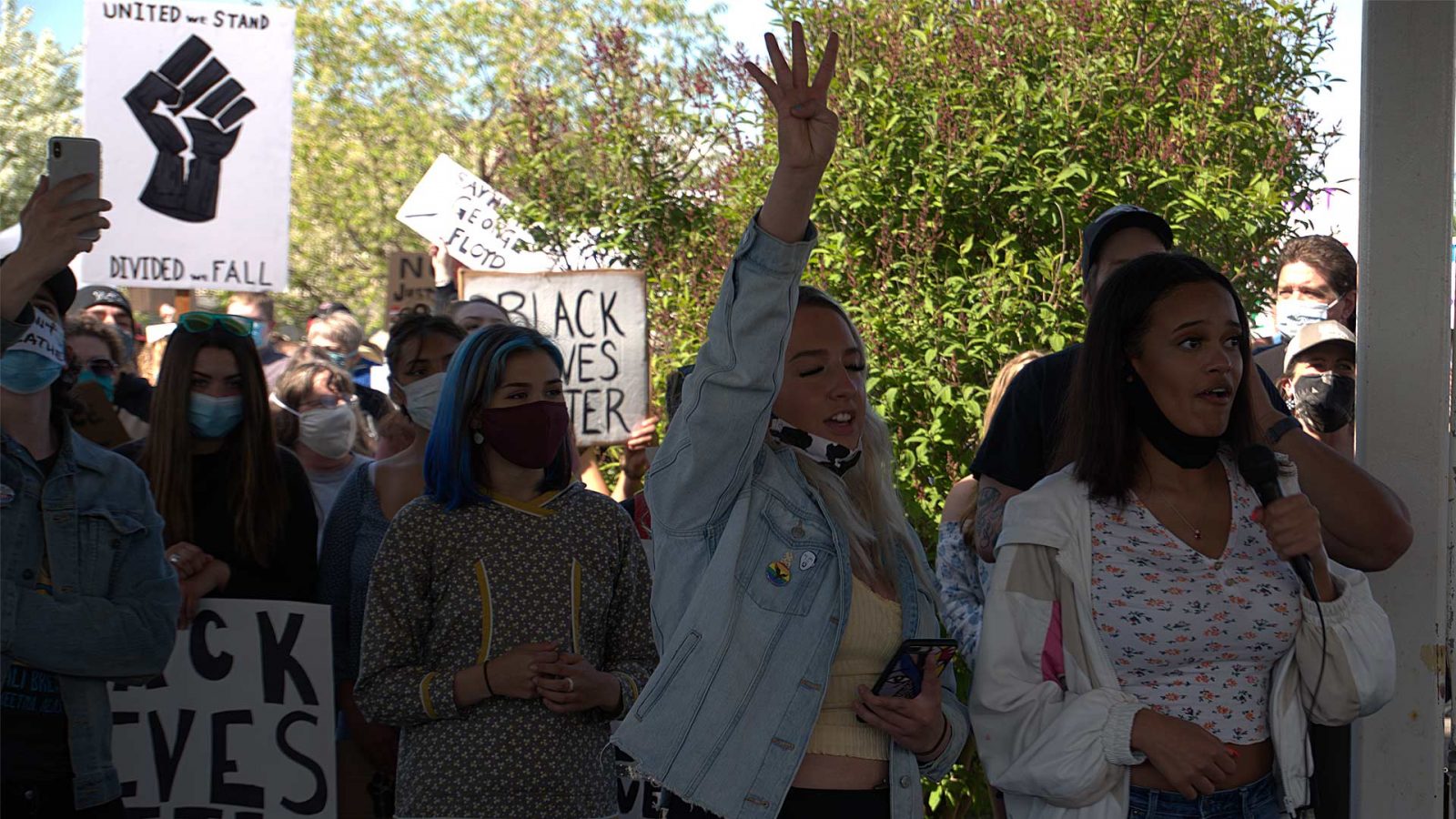 Aurora Till holds her hand aloft while leading a chant during the Black Lives Matter protest in Palmer on June 6.

Just before the actual march, the event took a more political turn with speakers encouraging attendees to register to vote at a table they had set up nearby.

“If you want to make a change, you have to be the change, so I’m not going to tolerate anybody not voting,” said speaker Elena Butler, a recent graduate of Mat-Su Career & Tech High School. “Register to vote. We need y’all to vote.”

At one point a middle-aged black woman took to the microphone and railed against President Trump and the 907 Freedom members across the street.

“We all know who those people are,” she said. “We need to punish them or get rid of them. There is no place in our Alaska for you.”

Speaking of President Trump, she said he is “bombed out and depleted like Afghanistan,” and asked the crowd to “Remember in November.”

As the march began, police kept a low profile and were mostly out of sight. Protesters chanted, “Hey, hey, ho-ho, the racist cops have got to go,” and “No justice, no peace.” Signs stated: “Hands up, don’t shoot,” “You’ve murdered many, we’re making more.”

David Petty, a black man and a long-time resident of Palmer, said he came to observe and make sure everything is “on the up and up.” He said Alaska is very different from the Lower-48 in terms of race relations.

“Being in Alaska we are sheltered,” he said. “Unless you experience it down there, unless you’ve been down there, you don’t understand.” 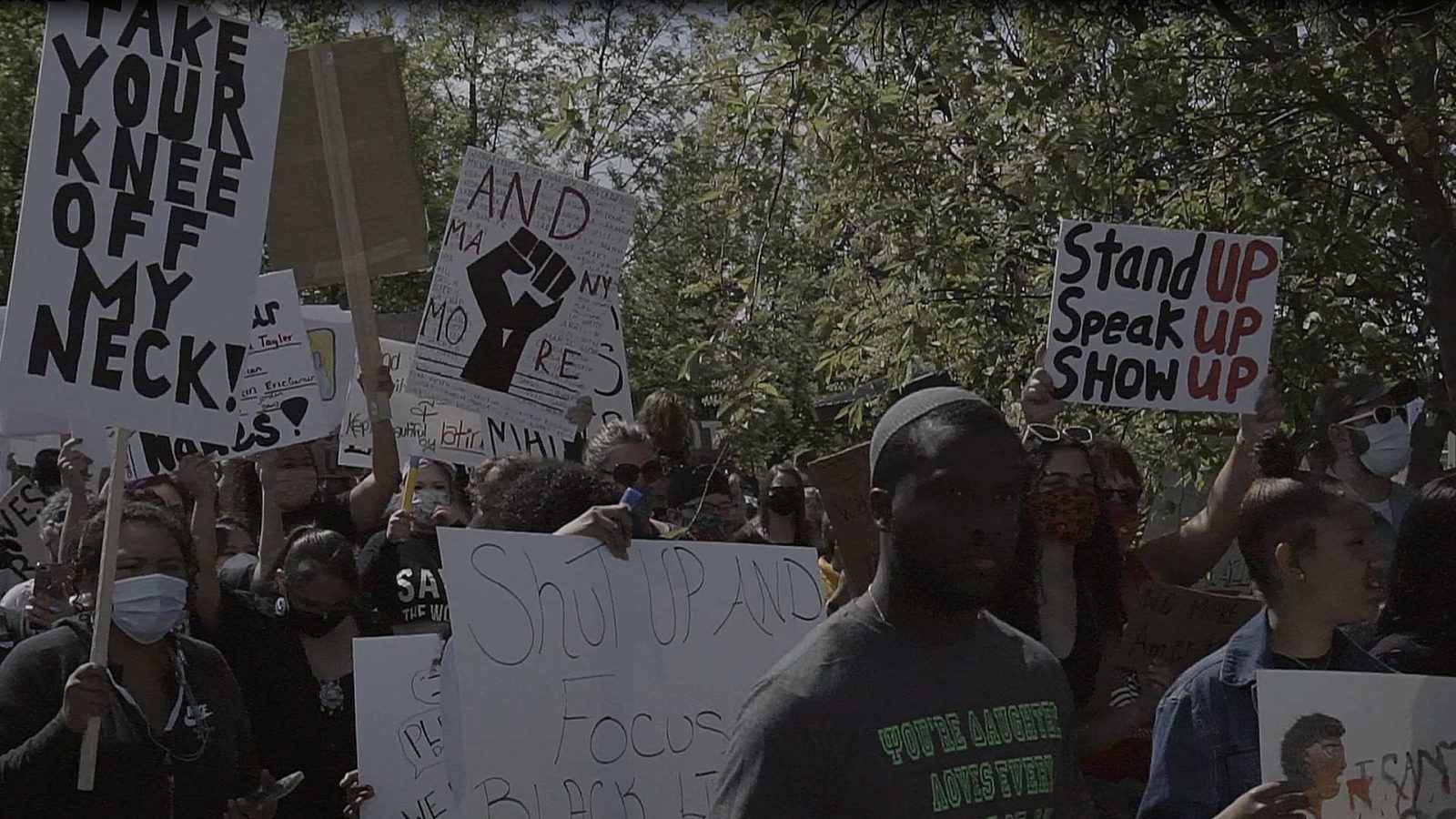 He condemned the violence that has broken out in many cities across the country and said he hopes the nation will unite across racial lines.

“We have to help our neighbors no matter what their color,” he said. “If you’re on the street bleeding I’m going to help you no matter what.”

Wasilla resident Javon Brotherwood took part in the prayers before the march. He said growing up black in the Mat-Su Valley included some experiences of racism in terms of name calling and looks.

“I just wish we could get to a point as Americans where we could all get together and be one,” he said. “We’re supposed to be equal but we’re not. We are all brothers and sisters in God.”