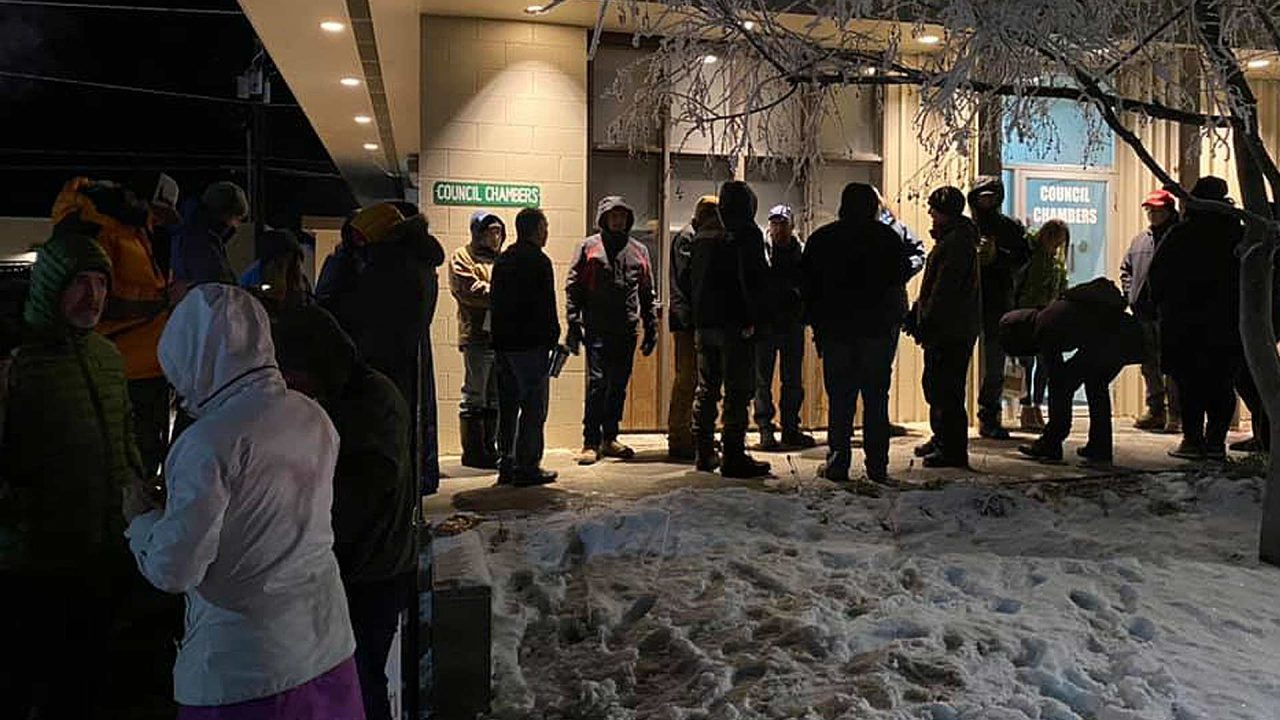 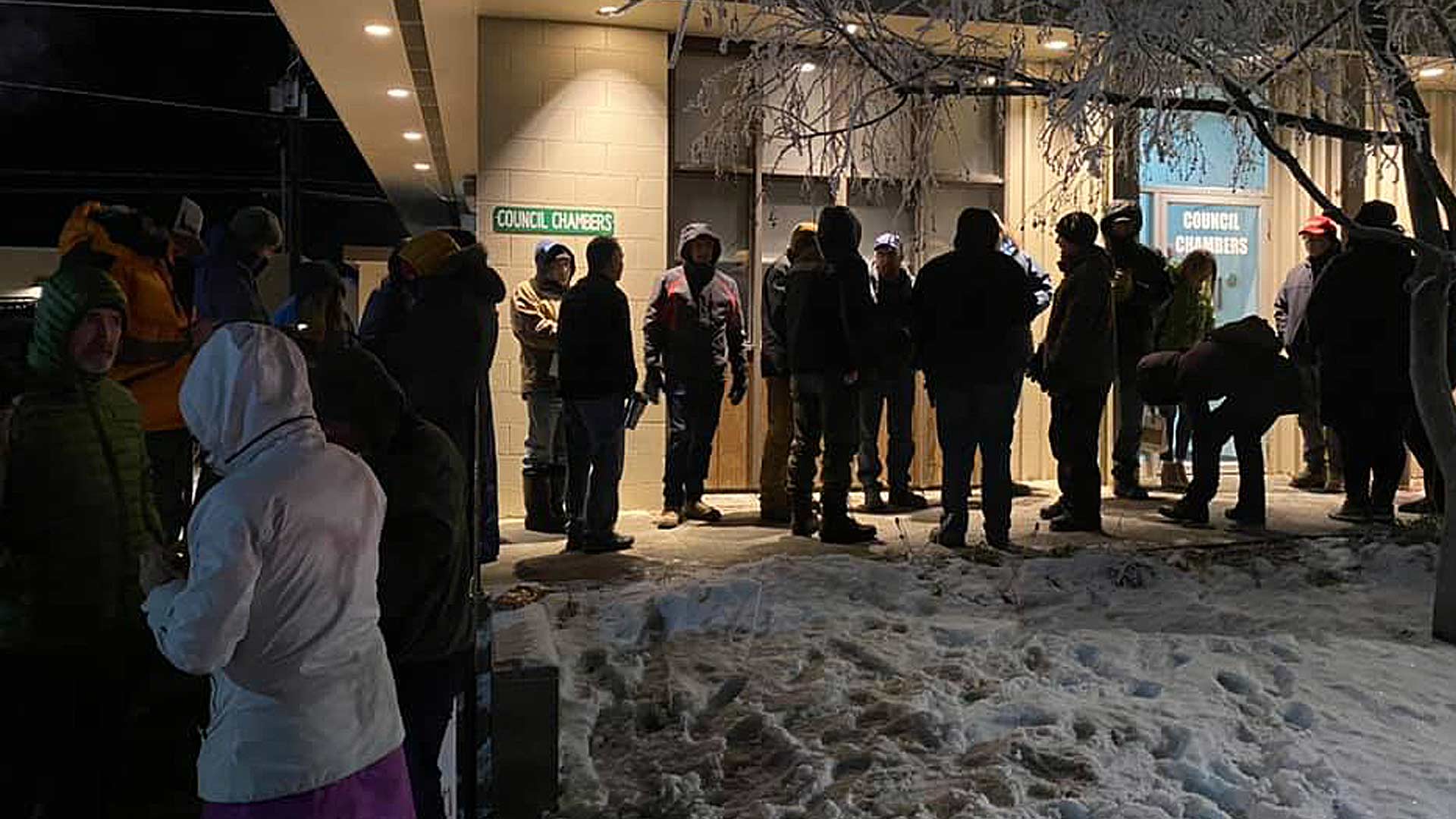 Hundreds of Palmer area residents stood in bitter cold weather outside the Palmer City Council chambers on Nov. 18 for a chance to publicly oppose a proposed citywide mask mandate.

After hearing nearly three hours of in-person testimony the Palmer City Council proceeded to read the first 100 of more than 600 emails it received on the topic.

Due to the massive public turnout the meeting ended around 11 p.m. without the council taking any action. The meeting will continue on Wednesday, Nov. 25, at 5 p.m. At that time, the council may vote to either impose or reject the controversial idea.

Modeled closely on Anchorage’s highly contentious mask mandate, the Palmer version would require masks in nearly all indoor and even outdoor settings. Businesses would carry the burden of enforcing the law as it requires them to remove anyone who fails to comply.

While a number of testifiers pointed out concerns that mask impede breathing, collect germs and in many cases completely fail to stop the spread of COVID-19, others said they choose to wear masks, but that it should be a personal choice. Only a small fraction of those testifying supported the mandate.

A town of only 6,300 residents, Palmer’s council meetings rarely see the kind of public turnout that descended on City Hall Nov. 18. The council chambers is a small room, which typically easily accommodates limited public participation. For the Nov. 17 meeting, however, a long line of people stretched around the sidewalk for a chance to address the topic.

The mandate idea comes on the heels of the recent October election in which progressives picked up one seat on the Palmer City Council. Deputy Mayor Sabrena Combs won reelection and newcomer Brian Daniels defeated longtime council member Linda Combs, which gave the liberal wing a 4-3 majority over the more conservative members. Combs introduced the ordinance along with Councilwoman Jill Valerius.

Combs is a self-proclaimed “progressive,” and her ordinance claims that the small historic farming town is in the midst of a COVID emergency that “threatens to overwhelm our health system, endangering the lives and well-being of our citizens.” Thus, it is necessary to introduce an unprecedented level of government authority unlike any the colony era community has ever experienced.

As of Nov. 18, the entire Mat-Su Borough, with a population 108,300, had just 14 people hospitalized with COVID symptoms. That amounts to 0.01% of the population and even these patients are not necessarily hospitalized because of COVID illnesses. They merely tested positive for the virus when entering the hospital but could be there for any number of reasons. Since March, five Mat-Su residents have died while having a positive COVID test.

According to the mask mandate ordinance, “All individuals must wear masks or face coverings over their noses and mouths when they are indoors in public settings or communal spaces outside the home, or outdoors when at a gathering or, when not at a gathering, when 6 feet of physical distancing from non-household members, (or small chosen close group) cannot be maintained.”

No one is allowed to substitute a face shield for a mask unless they “cannot tolerate a mask due to a physical or mental disability.” This would include those who are deaf or hard of hearing.

Additional exceptions are made for those who cannot safely wear a mask while doing things like getting their teeth cleaned or operating equipment that a mask might interfere with (think entanglement).

A special onus will be on employers who “must make sure employees who are present in the workplace have access to and wear masks or face coverings when with others.” Additionally, business owners will be enlisted as enforcers over the general public and are required to “deny admittance to any individual who fails to comply with this order and shall require or compel removal of such individuals from the premises.”

The only time a business can allow a faceless customer is if the patron removes their mask to “eat, drink or briefly scratch an itch.” And fitness clubs are allowed to let people work out without a mask so long as they are doing “high intensity exercise.”

Combs repeatedly removed her face mask at the Nov. 18 meeting to eat, but also set aside her face covering on multiple occasions without proceeding to eat or drink. If her proposed law passes, this would be a violation.

Small children – under age two – are not required to wear masks, but there are no religious exemptions mentioned. Presenters, musicians and “others communicating to an audience” can go maskless only if they are a full 25 feet from the audience and everyone else in attendance is wearing masks.

The ordinance does not spell out how Palmer would enforce the law, but states that “the city reserves the right to use all available enforcement options to ensure compliance.”