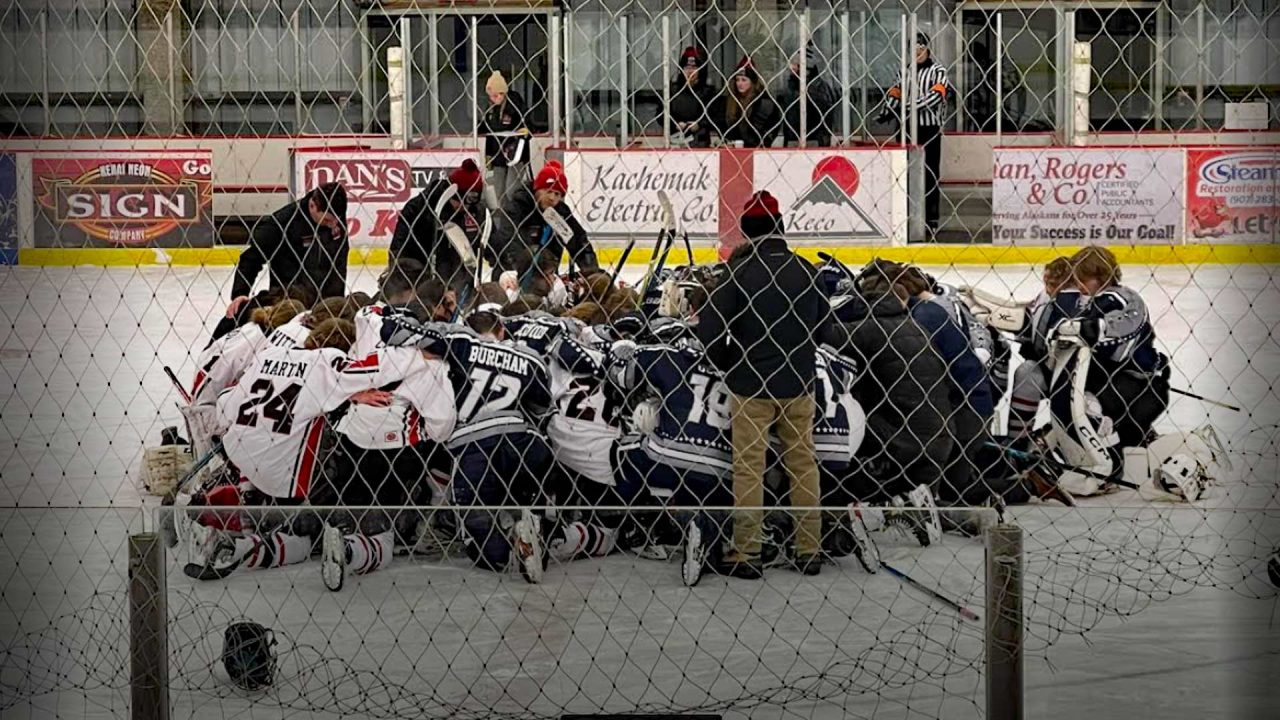 OPINION: Life, death and hockey huddles that transcend the game 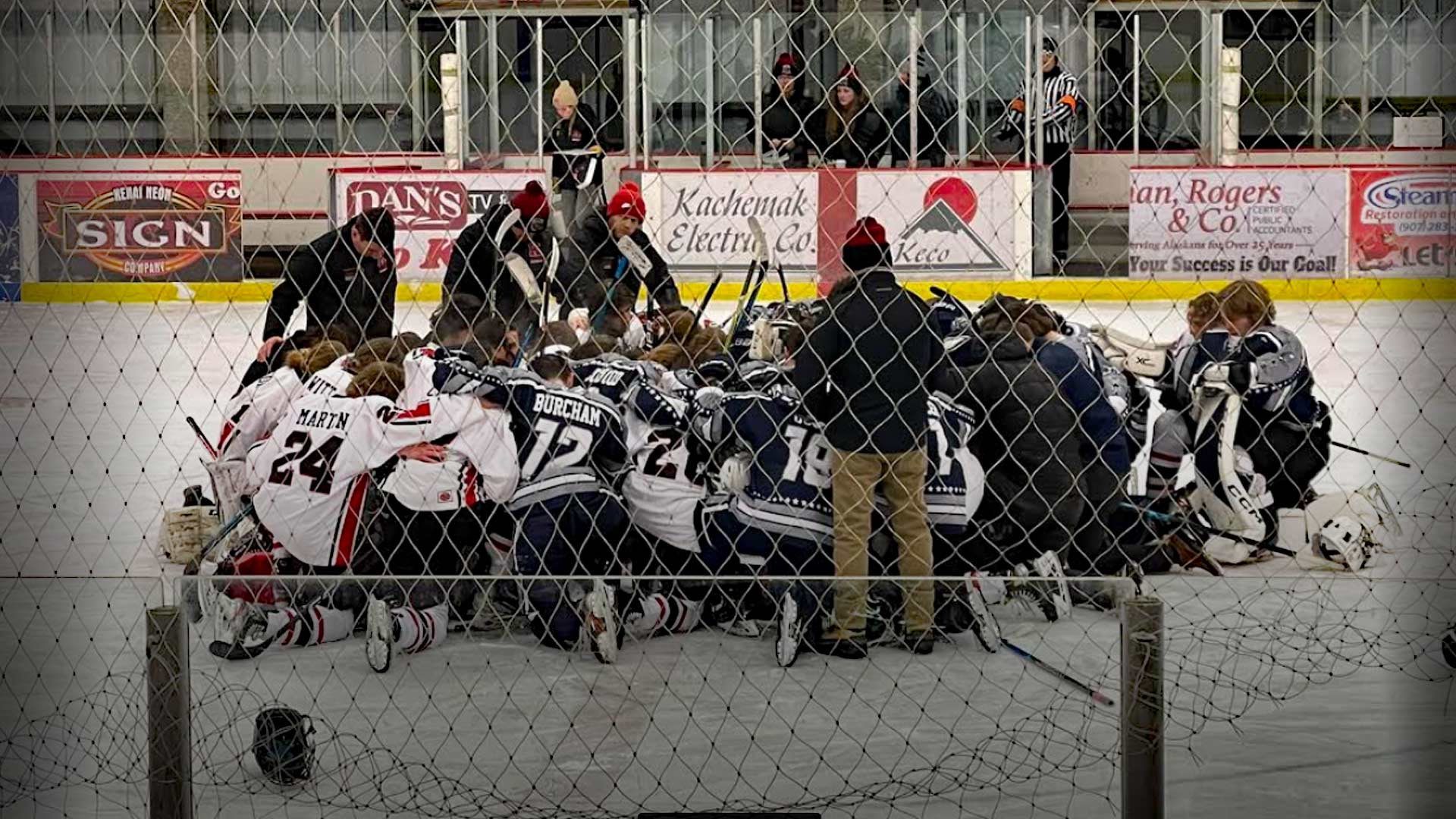 In our times of self-indulgence and violence, rays of hope and sunshine can emerge from the most unexpected places.

As a sports broadcaster for high school and junior-level hockey for over 20 years, I have seen the good, the bad and the ugly. Forty years ago, the Kenai-Soldotna sports rivalry, just then underway when the SoHi school opened in 1980, had bad blood circulating from all points of the compass. Some of it was playful and some of it was not. I was a varsity hockey coach in Kenai at the time and the bullets whizzed by me for several years.

The rivalry at times was cute, especially when visiting line-ups were introduced at basketball and football games, and fans took out newspapers to bury their noses in and pretend to show indifference. Or, just the opposite, with a “Who’s he?” chant.

But then post-game recriminations were seen in letters-to-the-editor, with endless repartee about goons, biased refs, “Look who’s talking” jibes, etc. It wasn’t pretty. All of it made for a great opportunity for a sociologist or psychologist to take notes and write a book.

Then two new high schools opened, and the rivalry was mitigated by sheer diffusion. The answer to the question of “Who do we need to hate anymore?” went in too many different directions. Does Soldotna turn its venom to Skyview? Kenai to Nikiski? Nikiski to its peer Skyview? And what about Homer?

The big, just-before-Christmas-vacation, Kenai-Soldotna hockey game took place earlier this month, and it began with a moment of silence…

Instead of poison pens, the rivalries took on a much healthier and sportsmanlike aspect, and peace returned to Alaska’s fabulous Kenai Peninsula. It also helped when many of the same players were ex-teammates as they progressed through the various youth programs. It’s harder to hate someone you know.

But lately I have been astonished by a phenomenon not from high school sports but from, of all places, Junior Hockey. This is the nursery of future college talent, where the level of play is quite advanced and occasional fights erupt – sometimes just to entertain fans when the home team is losing late in the game.

But as an announcer for Hockey TV, I have witnessed something new: with regularity, after the game many or most of the players meet, but not for the time-honored handshake (which still occurs after the last game of a weekend series). Instead, it is for a center face-off circle, kneeling-down, arms-around-your-rival’s-shoulder prayer huddle.

This puts the idea of sports into its proper perspective. Yes, we learn about ourselves and each other in the microcosm of sports, but it is, when all is said and done, just a game.

The sports fans of Soldotna have had a dose of it this past week. Their goaltender, Tanner Clyde, had his father’s life Samuel, instantly ended in a moose-induced car crash that spun his vehicle into an oncoming one. He was the only casualty in the tragic accident.

In that icebox of a rink, phone cameras came out and you could hear a pin drop. Everyone there had learned a new lesson about the True Spirit of Christmas…

Only 36, and the father of five, there is no possibility that a family cannot be traumatized by such an event. Then think about it happening just before Christmas. And the Clyde family was generous, taking in out-of-town junior-level players in an extended billet. Sam himself was a youth coach and a former high school player. In a show of solidarity, one of the Soldotna schools, where the children attended, stuck hockey sticks in the snowbanks. It was a tribute to the Clyde Family but also a silent prayer.

The big, just-before-Christmas-vacation, Kenai-Soldotna hockey game took place earlier this month, and it began with a moment of silence for Sam Clyde. The rink in Kenai is semi-outdoors, unlike the comfy Soldotna Regional Sports Complex, but it was Soldotna’s turn to play in the fast ice and arctic temperatures. Plenty of snow had blown in from the recent storm, many space heaters were in evidence, and yet the cold, metallic bleachers were filled with fans.

It was a tremendous game. Soldotna squirted ahead with a quick 3-0 lead, and it looked like a blow-out in the making. But Kenai showed its grit with relentless, clean and suffocating forechecking, out-shooting Soldotna and forcing them to take many icing calls. The pressure led to a closer score and a wonderful game, where both sides had nothing left in their tanks, and the 4-2 final seemed merely an afterthought.

Yes, there was a hand-shake line, with lots of camaraderie, but then came something that everyone there will never forget. It far surpassed the huddles I had seen at junior games, yet was unquestionably influenced by that excellent example. In the huddle was Tanner Clyde, who suited up in his goaltending gear but did not play. The coaches from both sides were there, and although the photo shows the referee attending to signing the score sheet, he and the others soon joined it.

In that icebox of a rink, phone cameras came out and you could hear a pin drop. Everyone there had learned a new lesson about the True Spirit of Christmas, and in sportsmanship, that ought to be imitated throughout our spiraling culture.