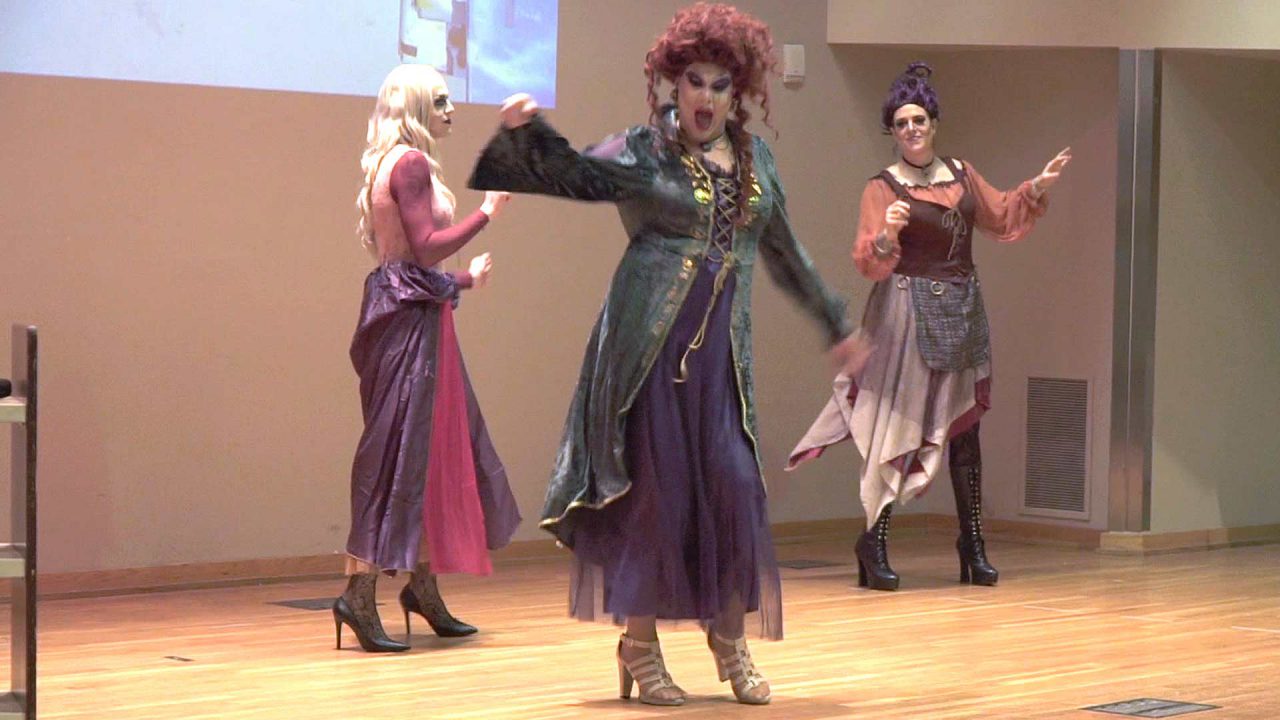 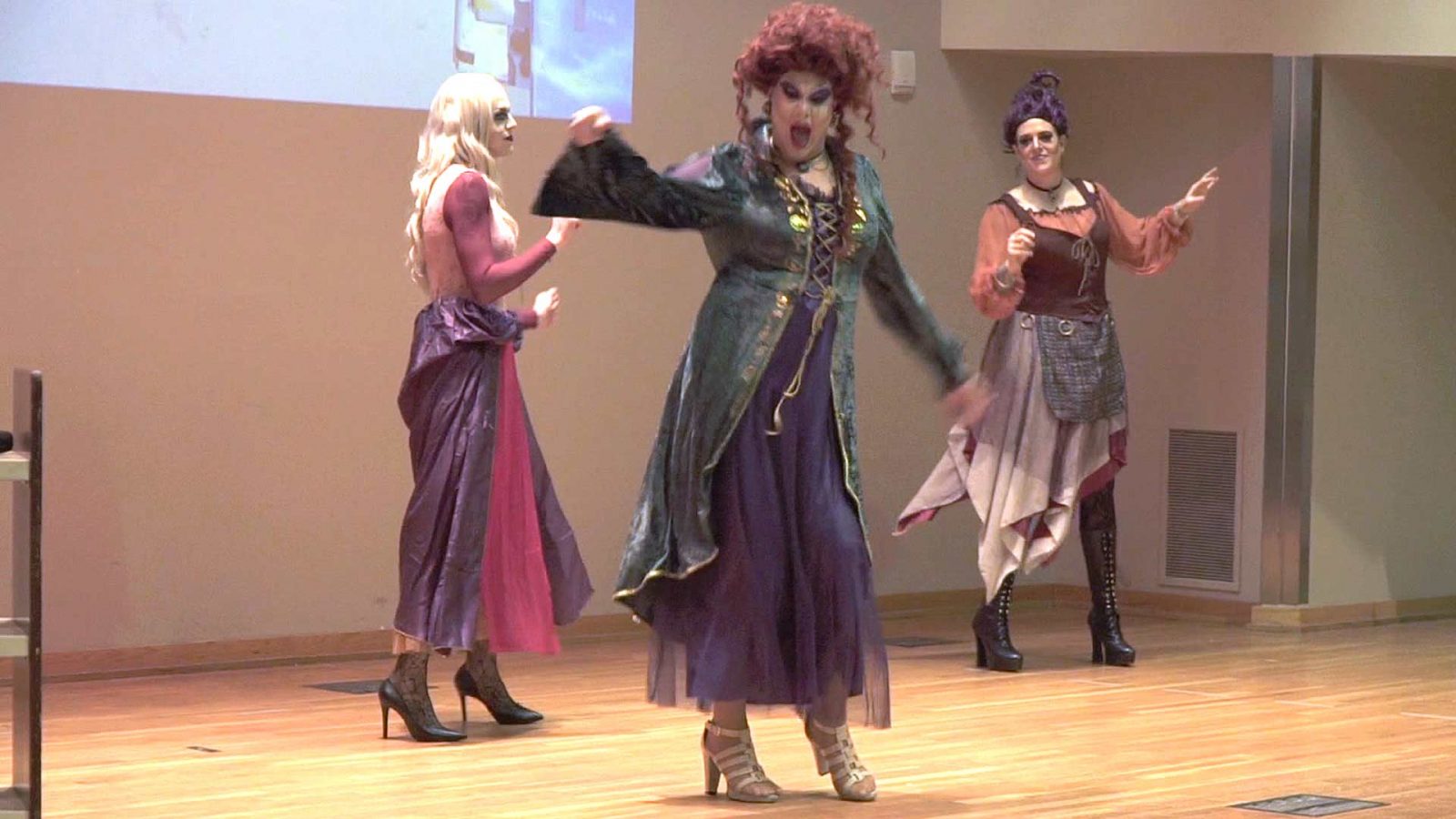 Drag Queens danced and posed for photos with young children during an Oct. 19 event at Anchorage’s flagship library. The seventh installment of Drag Queen Story Hour at the Loussac Library featured two men in heavy makeup, wearing wigs and exotic dresses with high heels and fake breasts. The men, who went by the names “Scarlett” and “Ivana”, were joined by a costumed woman called “Hank Vandickerson.” The three took turns reading stories that encouraged toddlers to reject widely held gender norms regarding differences between males and females.

The event included a 45-minute program for toddlers and young children, followed by a more “mature” presentation for adults and teens. The second event concluded with drag queens prancing and twirling on stage as they lip synced a song declaring, “I put a spell on you, and now you’re mine!” The song is a mainstay at Drag Queen events in gay bars across the country.

In the first story hour young children, some only able to crawl, watched as drag queens read books about boys who dress as princesses, dogs who meow, and cats who eat dog food. One book was about a crayon that was mislabeled “red” on the outside while being blue on the inside. No amount of help or interventions could make the crayon color in red.

Children dressed in what appeared as early Halloween costumes sat with parents or guardians during the show. After each event children were invited to sit and pose with the drag queens for photos.

The library’s Youth Services Coordinator Elizabeth Nicolai said there were 103 children and adults at the first event. Roughly a third of that showed up for the second show.

Nicolai introduced Drag Story Hour as a partnership with Identity, Inc., an LGBTQ activist group in Anchorage. Since launching the program in 2018 the Loussac Library has been an enthusiastic supporter, making it an official library program. Identity is not required to pay the standard fee to use the spacious Wilda Marston Theatre, and the taxpayer funded library provides marketing and numerous staff to help with welcoming attendees and setting up. It also provides the books.

Brooks Banker is one of the organizers behind the library event. He oversees community outreach and youth programming at Identity Inc., and chooses drag queens for the library show. He has also performed at Drag Queen Story Hour but is better known around Anchorage’s gay bar scene as one of the more energetic Drag Queens. He goes by the name “Goldie Delicious.”

Anchorage mother Stacey Lang said she couldn’t believe the library funds and promotes the Drag Queen events, which she sees as an attempt to influence impressionable young children with a controversial and harmful view about human sexual identity.

Lang joined others in a peaceful protest outside the library during a Drag Queen Story Hour this past June. She also expressed displeasure with the event to the library. Additionally, Lang began an online petition against the event that garnered nearly 1,000 signatures asking it to be discontinued.

“These events really target children,” she told the Alaska Watchman. “The more I looked into this, I was really disgusted. They are planting seeds in the minds of these kids.”

The national Drag Queen Story Hour, which the Loussac Library says it is not affiliated with, shares a similar format to the Anchorage program. The website encourages young children to “get their sissy on” and choose gender pronouns that fit with their sexual identity.

Drag Queen Story Hours first started in Alaska in 2017 when the Juneau Public Library hosted an event with local drag queen Gigi Monroe. A spokeswoman for the Loussac Library, who did not want her name printed in this article, said the Anchorage library began hosting its program after a request by “certain members of the community.”

For those who object to the event on ethical grounds, she said they can attend other library programs. In order to be financially sponsored by the public library, however, groups must go through an application process. In the case of Drag Queen Story Hour the library reviewed the application and decided to officially sponsor it with three to four events annually. This year the library decided to expand Drag Queen Story Hour to include a second event for teens and adults.

According to the library spokeswoman, the vetting process for drag queen presenters consists of asking that the performer be “an authority in their field” or an “educator.” The spokeswoman noted that while there have been some concerns expressed about Drag Queen Story Hour, the library has determined that the events promote “Inclusivity and kindness.” She said the library is “very upfront about when the events are” and that “no one is surprised about the content.”

The board meets the third Wednesday of each month at 5:30 p.m. at Loussac Library in the boardroom on the fourth level. Meetings are open to the public.