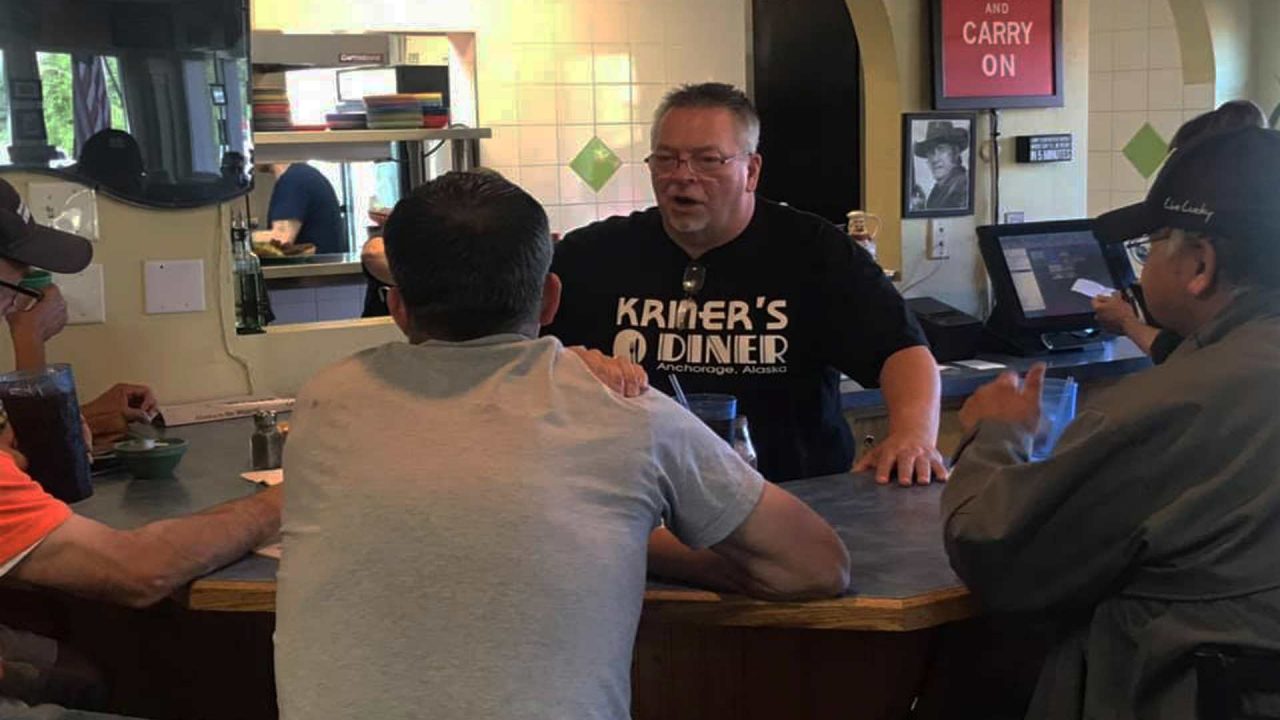 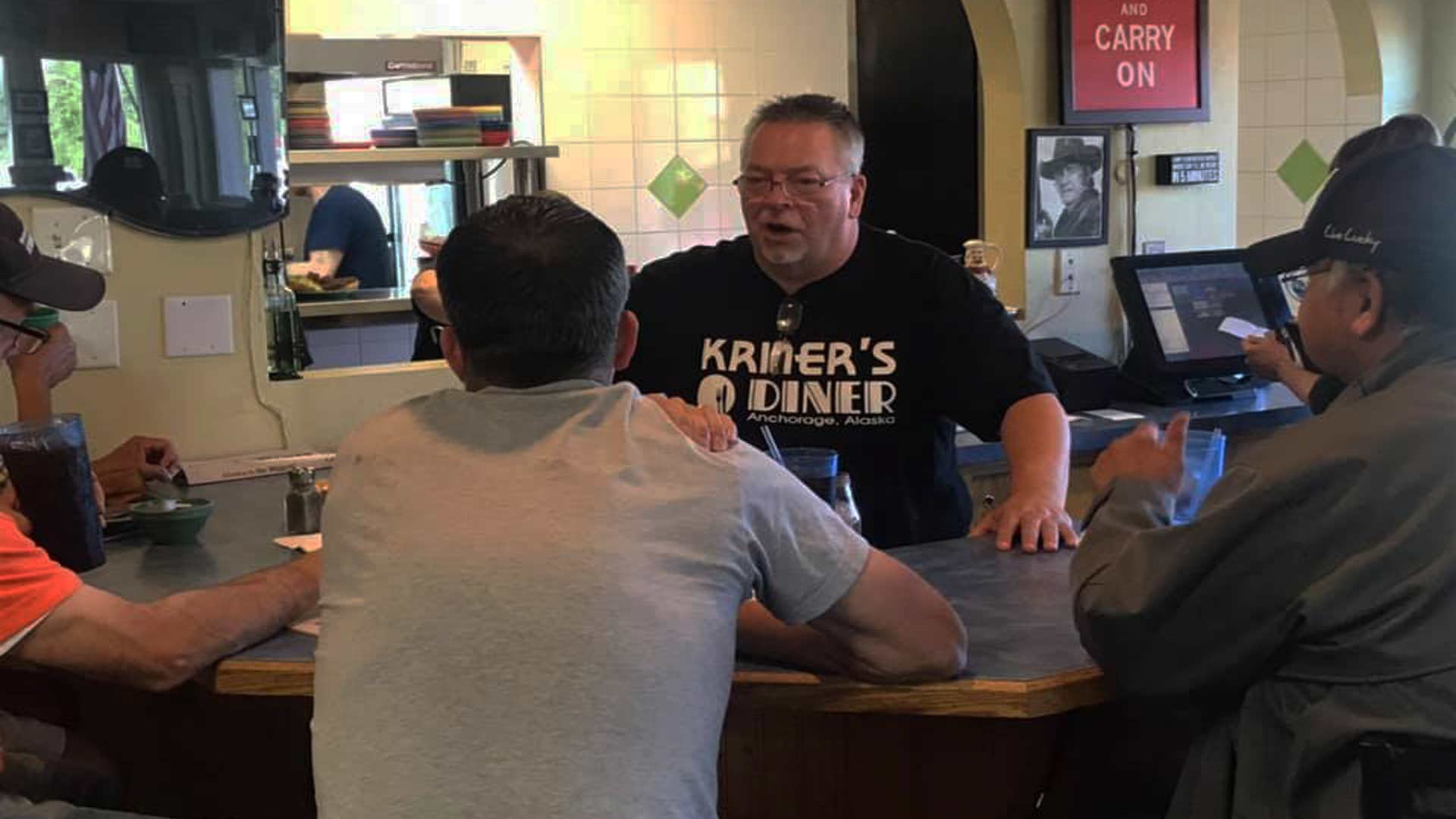 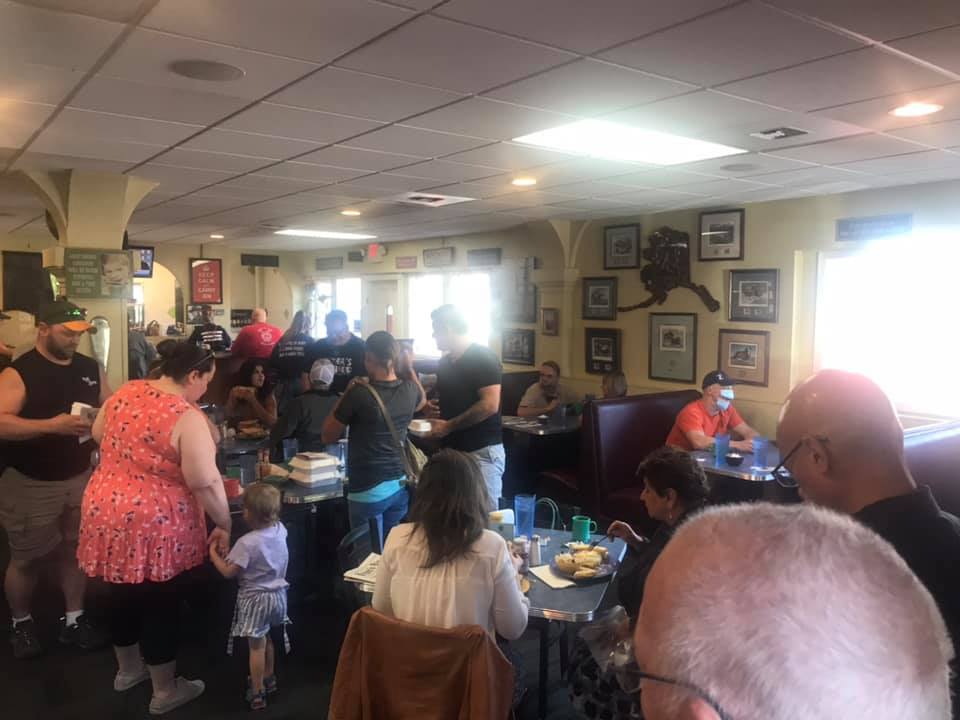 Kriner’s Diner is packed with patrons on Aug. 5 in Anchorage.

Jason Woscek went out of his way to eat at Kriner’s on Aug. 5, bringing his family and out-of-state relatives to enjoy a hearty breakfast in the packed Anchorage restaurant.

This is despite the mayor’s order mandating that all Anchorage restaurants close beginning Aug. 3 for indoor dining due to COVID-19 concerns.

Woscek said he “100 percent supports” the Kriner family in their decision to openly defy Berkowitz’s order.

“Why not come down and support a local family company in spite of all that’s going on,” Woscek said “He’s starting a revolution.”

Kriner is not alone. After two days of staying open, a diner across town – Little Dipper – followed suit and others may come on board soon.

Despite the mandates, by 11:30 a.m. Kriner’s parking lot was mostly full.

The mayor’s 15th emergency order imposes limits on most outdoor gatherings and restricts bars and nightclubs to takeout or delivery. Restaurants and breweries are banned from indoor service and  bingo halls and theaters must close completely. Churches can’t accommodate more than 15 congregants.

Despite the mandates, by 11:30 a.m. Kriner’s parking lot was mostly full on Aug. 5 and a line of patrons spilled out the door waiting to sit inside and enjoy a plate of classic American diner cuisine.

Like many customers this week, Gary Kirkhart said he came to Kriner’s to show his support.

“I’m just supporting him, because this clown Berkowitz is a lame duck mayor who could care less about the businesses in town,” he said. “A bunch of people are supporting Kriner’s because he has balls enough to support the city of Anchorage. People are just tired of it.”

Kriner’s website states that he’s a “conservative at heart” but welcomes “all political views … Remember God loves us all.”

Berkowitz has defended his order, saying it is necessary to keep Anchorage safe from coronavirus. As of Aug. 5, the city of 290,000 residents had just 24 people hospitalized with COVID-19. Two of those are on ventilators. Hospital capacity includes 119 available non-ICU beds, 41 ICU beds and 121 available ventilators in addition to 26 pediatric ventilators. Over the past five months, Anchorage has recorded 12 COVID-19 related deaths. 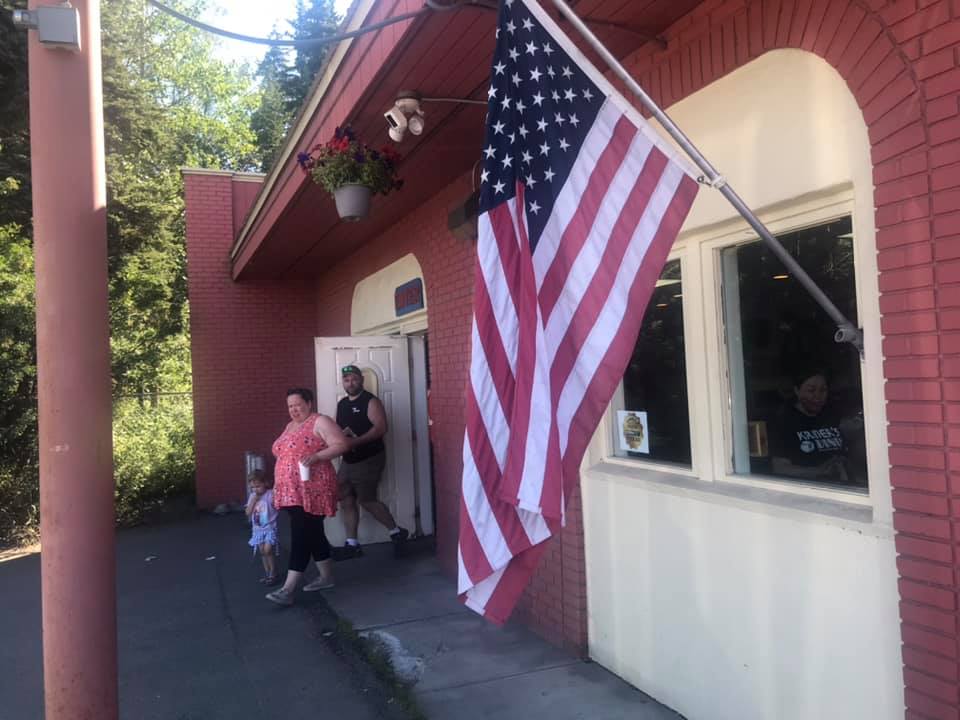 A family leaves Kriner’s Diner after breakfast on Aug. 5 in Anchorage.

Despite ample hospital capacity the mayor has imposed restrictions that have left many local businesses like Kriner’s struggling to survive.

Andy and his wife Norann own the all-American Kriner’s Diner which specializes in large portions of homemade fare. Andy has been in the restaurant business for decades, starting in Soldotna when his mom, Sally Hoskins, opened Sourdough Sal’s restaurant in 1979. The Kriner website states that he’s a “conservative at heart” but welcomes “all political views … Remember God loves us all.”

Berkowitz’s latest mandate, however, has been hard to abide, he said.

The diner scraped by when an earlier Berkowitz mandate ordered all restaurants go to 50 percent capacity. When he then mandated to-go orders only, business dropped off to the point where Kriner couldn’t make payroll. The federal Payroll Protection Plan money got him through three months, but now he’s out of money again, he said.

“Now I need to make money on my own,” Kriner said from his diner on Aug. 5. “I wondered what the penalties were if I open, but I couldn’t get an answer from anyone. I thought, if I opened, I would find out pretty quick, and I have.”

It would be a really, really bad look for him to arrest me. I would hope he’s smarter than that.

He said the city could fine him between $300 and $550 for each day he remains open. Beyond that, Kriner isn’t sure what the mayor will do.

“I can’t imagine that they would arrest me, but none of that matters to me,” the affable Kriner said. “I’m not scared of anything they can do.”

The mayor reached out to him Tuesday wanting to talk.

“I’m not going to change anybody’s mind and I’m not trying to,” Kriner said. “I told the mayor that and said it’s not that I hate the mayor. I don’t hate anybody.”

Berkowitz’s code enforcement team came down Aug. 3 and posted a cease work order on the front door, which someone stole about an hour later.

“They said I had to close down immediately, and I actually thought I was going to,” Kriner recalled. “But then I asked my wife a few questions and decided to just stay open.”

As far as the end game with the mayor goes, Kriner is taking it “day by day.”

“I don’t know what’s going to happen,” he said. “I don’t know exactly what they can do, but it would be a really, really bad look for him to arrest me. I would hope he’s smarter than that.”

So far, he hasn’t had to worry about the threat of fines, thanks to supporters who have donated nearly $2,000 and counting to pay any penalties the mayor may impose.

“I haven’t asked for one dime, but people keep giving me money, and it’s not slowing down today,” he said. “Today, I’ve collected $400 or $500 dollars and I’ve had several different attorneys offer to help me out.”

Deciding to open, however, hasn’t come without criticism.

His stand against the mayor’s order has inspired other restaurant owners to consider opening as well. The Little Dipper on Dimond opened Wednesday and others are talking to Kriner about following suit.

“This stuff has turned all us restaurant owners into friends,” he said. “Naturally you are in competition, but I’ve met so many restaurant owners and I’ve never had so much fun. We’re all in the same boat and we’re all likeminded. You can’t live in fear forever.”