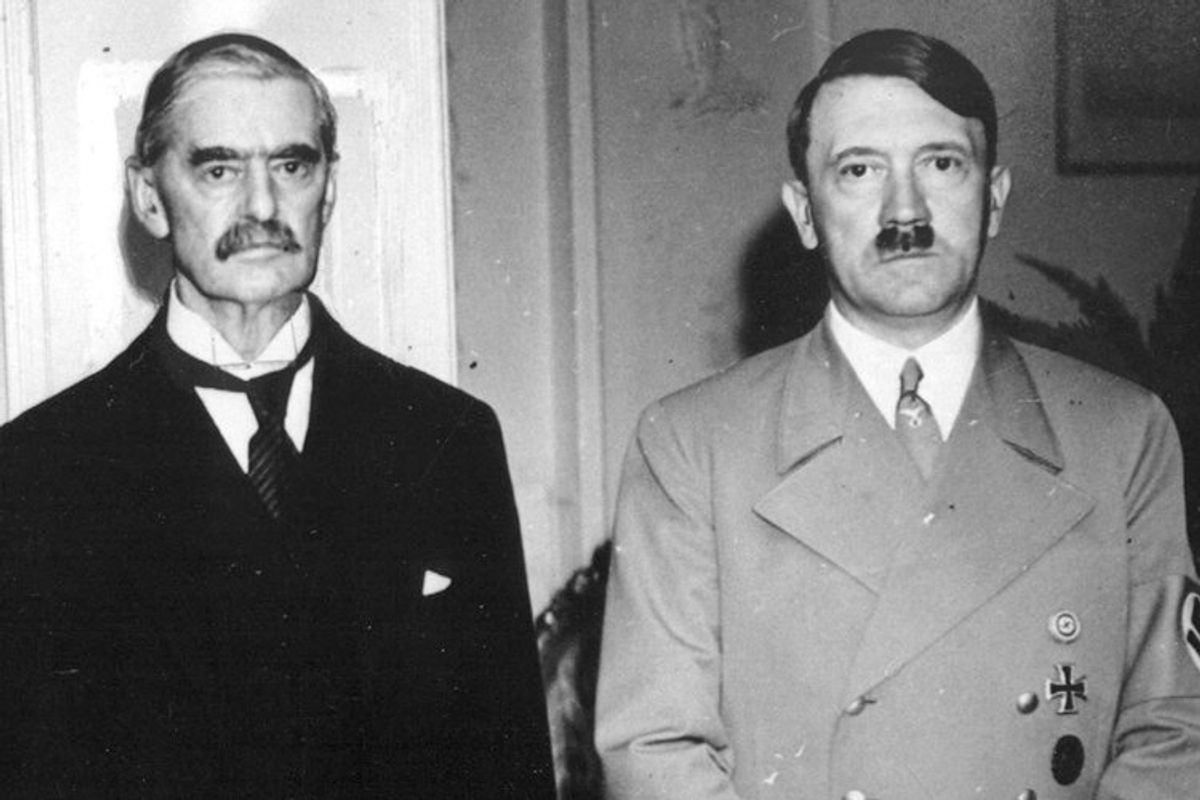 Is Biden our Neville Chamberlain?

Neville Chamberlain was a British politician who served as Prime Minister from 1937 until 1940. While it is risky to compare historical events, especially from separate countries and different centuries, there usually are correlations in history that reveal predictable outcomes from shared behaviors. With the change in United States leadership to a Biden Administration, a critical analysis of how the United States will confront international players pursuing an expanded global role may provide a peek into our future.

China is America’s premier adversary. The Chinese government is rapidly expanding its global reach through financial, diplomatic, and military programs. China’s long term plan is to replace the United States as a global superpower.

China’s Belt and Road program is a global financial effort to make countries with weak economies dependent upon China. China loans money to build infrastructure with the guarantee that if the country can not repay the loan, China may foreclose on the property, making it essentially Chinese property. China also buys international businesses to control the market and steals intellectual technology. Financially, we see how China buys influence, i.e. Hunter Biden.

Diplomatically, China is befriending American allies, often pressuring them to vote favorably with China in the United Nations, or pressuring the World Health Organization to praise China’s handling, and to cover-up their mishandling, of COVID-19. They infiltrate foreign nations with spies in government even with a spy having an affair with Representative Eric Swalwell while he sat on the House Intelligence Committee.

“Today, the goal of China is replace the United States as the global leader”

One of the most blatant acts of international diplomatic snubbing was China’s quashing of the Hong Kong democratic movement. England agreed to relinquish control over Hong Kong to China by signing the Sino-British Joint Declaration in 1984,. Under the Hong Kong Basic Law agreement, China agreed to allow Hong Kong to maintain a separate legislative system and the people of Hong Kong would retain their rights and freedoms until 2047. China undercut this agreement through Bejing court rulings, installing Governors favorable to Bejing rule, and finally in 2020 crushing the peoples rights and freedoms. So much for China keeping their word.

Don’t think China is anti-freedom and anti-individual rights? As I write this, Chinese Muslim Uyghur’s are being placed in concentration camps and even gang raped by CCP prison guards. The Chinese government is using forced sterilization, forced abortion, and live human organ harvesting in a calculated genocide of an ethnic minority, but Joe Biden says the Uyghur genocide is “just a Chinese cultural norm.”

China’s military growth has been expediential and now posses a serious threat to world stability. Using the Belt and Road project to build a massive port facility in Djibouti, China has converted that port into a forward basing military facility. This gives them a foothold in Africa and potential control of the sea-lane chock-point between the Red Sea and the Gulf of Aden.

“the Biden Administration appears to be taking steps to appease China.”

Of concern to Alaska must be China’s increased interest in the Arctic. They have more icebreakers than the United States and have started sending both naval and airborne expeditions further north and closer to Alaska. While the primary threat to Alaska remains Russia, China is moving in our direction. I would not be surprised if someday soon we read about China flying military operations close to Alaska, causing the United States to scramble interceptors in response.

Which brings me to the point of this column: China is expanding its global influence, intent on making their communist form of government the sole superpower that pulls the strings of international relations. My liberal/socialist friends, if I had any, would claim I am exploiting China’s destiny for political gain. Wrong. I am alerting Alaska that the trend of increased Chinese influence in America does not bode well for Alaska.

Over the past 42 years, the US allowed China to expand its global influence, virtually unchecked. During the Trump Administration, the US pushed back on Chinese threats to reclaim Taiwan using military force. President Trump increased Taiwanese defensive arms sales and bolstered diplomatic relations. Recently, China has increased air and sea operations in the Taiwan Strait, which separates Taiwan from China, consistently claiming Taiwan must reunite with China. As can now clearly be seen, China is ramping up pressure to reclaim Taiwan by conducting military activities in the Taiwan Straits, very close to Taiwan, and pressuring countries to not recognize Taiwan.

How will the Biden Administration respond?

Today, the goal of China is replace the United States as the global leader, with one step being to reclaim Taiwan. That action will demonstrate international weakness of the United States. Will it be by military invasion, and if so how will the United States respond? Or will it be by appeasement, with US diplomatically retreating from Taiwan and allowing the Chinese to quash another democracy? Either way, China wins unless the US blocks China’s actions.

In 1938 Germany “annexed” a portion of Czechoslovakia, occupying the Sudetenland. Chamberlain negotiated the Munich (appeasement) Agreement in late 1938 with assurance that Germany would take no further military action to expand in Europe. How naïve. In 1939, Germany took over the rest of Czechoslovakia, immediately followed by the invasion of Poland. We all know the rest of history.

While China is intent on controlling the Pacific, the Biden Administration appears to be taking steps to appease China. If Taiwan falls, it puts South Korea right in the bullseye for uniting North and South Korea, not as a democracy, but rather as a communist Chinese satellite state. Then Japan will be under tremendous pressure to concede to China’s will.

Alaska’s trade has historically been with Asia. A communist China controlled Asia is a direct threat to Alaska’s economic future. Will Joe Biden appease China and create the next global superpower to control our destiny under a communist rule of law? If he does, he has made the same mistake Neville Chamberlain made in 1938 and, unfortunately, it will end up with the same results and be very damaging to Alaska’s economic future.