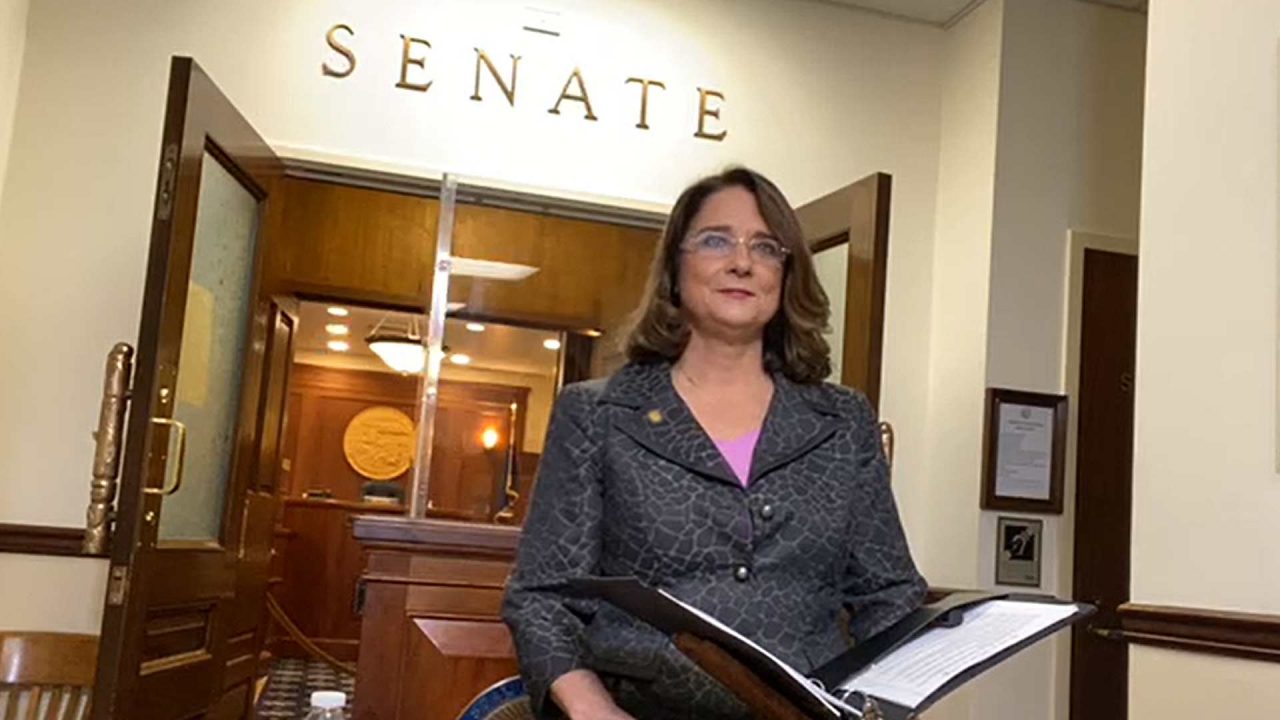 Sen. Reinbold says Gov. Dunleavy’s letter aims to ‘intimidate those who question him’ 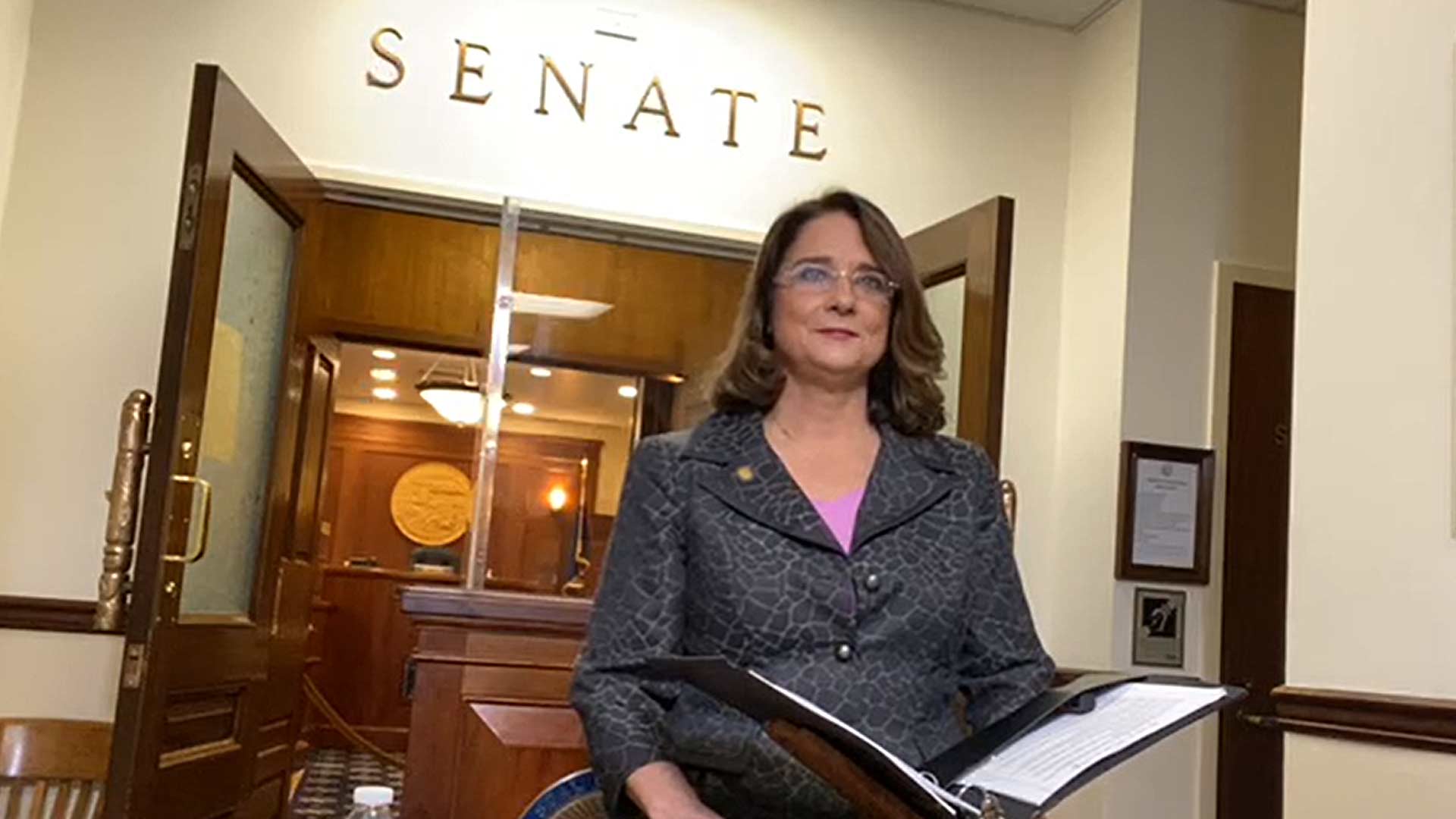 Sen. Lora Reinbold (R-Eagle River) held a March 4 press conference in which she addressed a scathing letter which Gov. Mike Dunleavy sent Feb. 18 accusing her of abusing her public office by mischaracterizing his administration’s response to COVID-19.

Reinbold said the letter was “unbecoming of a governor and crossed the bounds of civility.”

Dunleavy’s letter stated that he would no longer have members of his administration interact with Reinbold in her official capacity as chair of the powerful Senate Judiciary Committee. She is also the vice chair of the Senate Legislative and State Affairs Committees, and sits on the Budget, Joint Armed Services and Audit and Health and Social Services Committees.

“The governor’s letter is an attempt to intimidate those who question him and his administration and to silence those with opposing views,” Reinbold said as she stood outside the Senate Chambers.

Fundamentally, the dispute centers on a difference of opinion regarding how the state has dealt with COVID, she said. Reinbold has advocated for an end to all emergency orders and a return to normalcy across the state. Rather than issuing general mandates that apply to everyone, Reinbold advocates a targeted approach that protects the “most vulnerable while striving to avoid collateral damage to the average person,” she explained.

While Dunleavy chose not to enforce his mandates or fine Alaskans, he had that ability. Reinbold took issue with the fact that the governor repeatedly extended his disaster declaration throughout 2020. She noted that state law says disaster declarations cannot last for more than 30 days. Dunleavy issued his first declaration on March 11.

Reinbold claimed that much of the governor’s ire toward her stems from her opposition to extending his emergency powers through Senate Bill 56.

“He began to issue a litany of mandates with no legislative oversite, raising serious constitutional concerns, because the Constitution clearly states the legislative branch writes the laws,” Reinbold said.

She lamented that on March 28 the Legislature passed SB 241 which she said, “unfortunately allowed the disaster to be extended through Nov. 15, 2020.” After that time, however, Dunleavy extended his emergency declarations twice more – once before Thanksgiving and then again shortly before Christmas.

Reinbold called those actions illegal, as they did not involve the Legislature. While Dunleavy’s Dept. of Law deemed his actions constitutional, Reinbold claims the Legislature’s legal and research division disagrees.

Reinbold said she asked Dunleavy to provide her with hard data on why he thought extending emergency declarations were necessary before the holidays. In particular, she asked for data showing that Alaska hospitals were at or near full capacity in November. Likewise, she requested information regarding how much money is associated with each new COVID diagnosis and exactly how COVID deaths are determined.

“We’ve gotten partial information, but not complete information,” she said of her requests.

Reinbold claimed that much of the governor’s ire toward her stems from her opposition to extending his emergency powers through Senate Bill 56, which he introduced at the start of the current legislative session. This bill would prolong the disaster declaration until September 2021.

The bill is largely dead at this point, Reinbold noted, but it is still “lurking.”

Gov. Dunleavy, is trying to disenfranchise the legislative branch – the people’s branch.

Reinbold said her dispute with the governor also deals with the separation of powers between the legislative and executive branches.

“The executive branch, in this case Gov. Dunleavy, is trying to disenfranchise the legislative branch – the people’s branch,” she said. “He does not want to provide us the ability to question or get information from the executive branch regarding the COVID-19 disaster.”

Turning to the governor’s letter, she said it contained “inaccurate and unsubstantiated” assertions against her.

“Governor Dunleavy claimed that I said he declared martial law. I never said that,” she retorted. “He distorted my statements and claims that I stated he required mandatory vaccinations. Again, that is false.”

Reinbold has also decried Dunleavy for appropriating around $6 billion in COVID relief funds with “almost no oversite” from the Legislature.

Diverse opinion and feisty debate is of critical importance in the political realm without the fear of significant repercussions.

With regards to the governor’s criticism of how she has run the Senate Judiciary Committee, Reinbold gave a defense of the committee’s recent work. She first explained that the Judiciary is charged with overseeing legislation dealing with the programs and activities of the court system and the Department of Law. To that end, the Judiciary has held hearings that addresses legal questions regarding COVID vaccine liability, mask mandates, mask efficacy, the usefulness of emergency orders related to COVID, and the rightful role of the Legislature to curb executive branch overstep.

Reinbold said it is important that the Judiciary Committee be able to ask questions and get information from the executive branch as they examine legislation. Sometimes, this process involves disagreements, she said, but that does not warrant cutting off communication.

“Diverse opinion and feisty debate is of critical importance in the political realm without the fear of significant repercussions,” Reinbold said. “The outlandish behavior of the governor should cause pause for all. If a respected senator cannot be treated appropriate by the governor what can the average citizen that has a harder time gaining access expect?”

Reinbold concluded the 30-minute press conference by affirming that intelligent minds should be able to respectfully differ without breaking ties.

“We can have a difference of opinions and even spicy debates, as have happened since the inception of our nation,” she said. “There should be no tolerance in a free country for an executive branch that wishes to be above the law – to be intolerant of being questioned.”

In answering a reporter who asked if she planned to use her subpoena powers to order executive branch personnel to testify before the Judiciary, Reinbold said she is “slowly working through this.”

“I am hoping that he will have civil discourse and that he will withdraw the letter, issue an apology so we can have a conversation,” she responded. “But I will not meet with him until he withdraws the letter and issues a formal apology.”