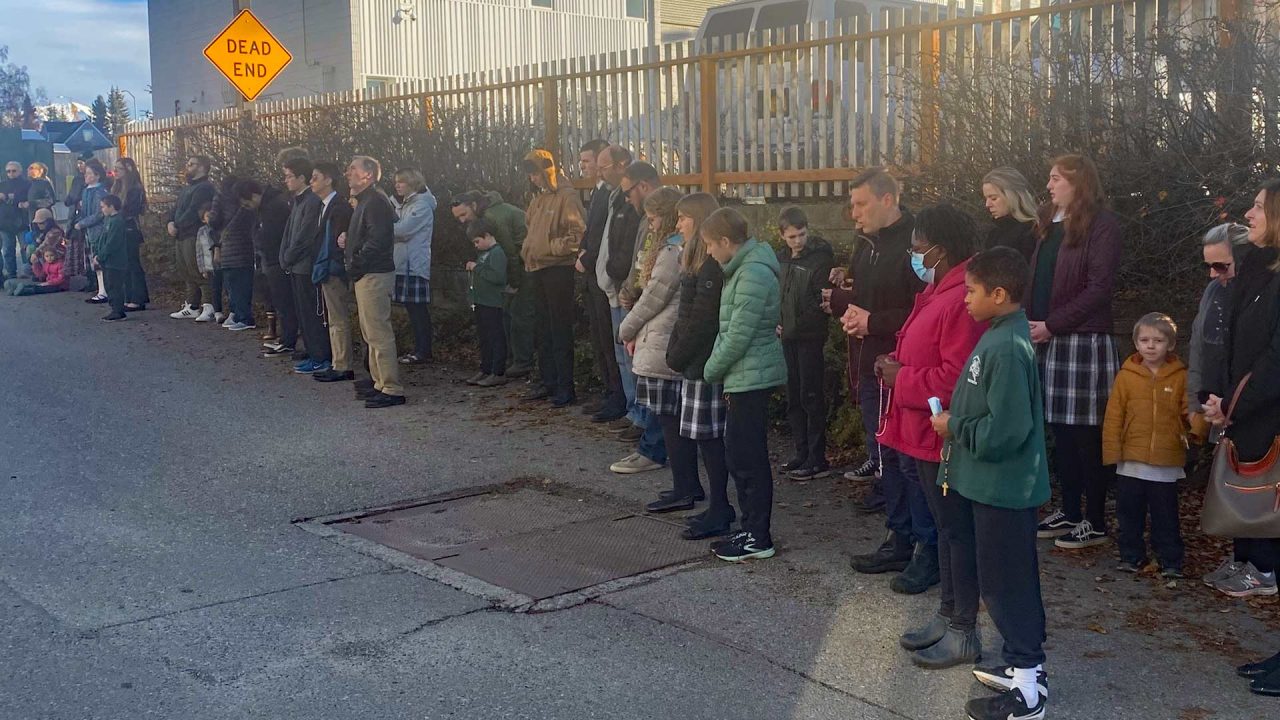 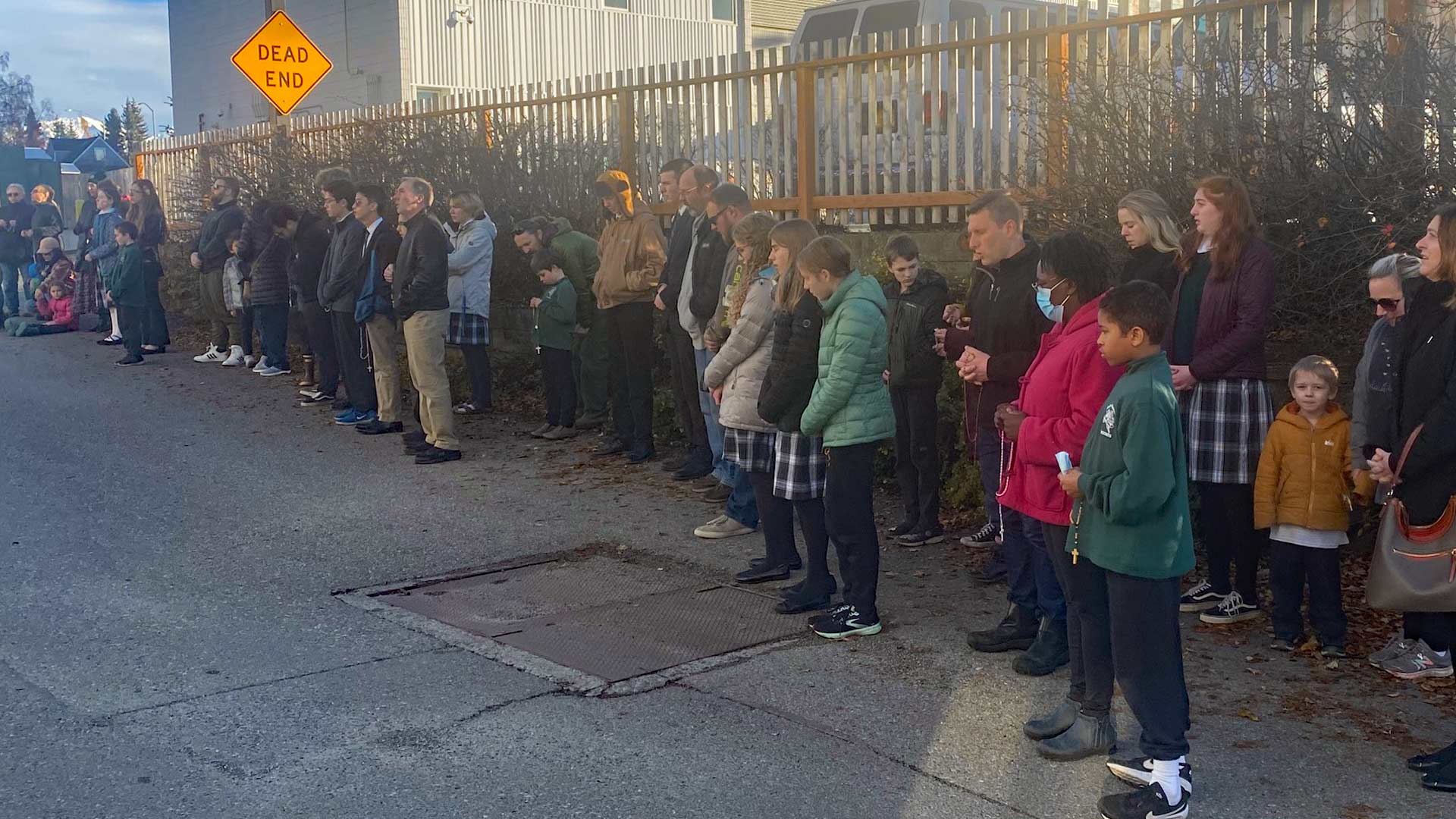 Roughly 50 parents, teachers, students and supporters of Holy Rosary Academy gathered outside of Archbishop Andrew Bellisario’s Anchorage offices on Oct. 25 to pray that their chief spiritual shepherd reconsider his decision to cut ties with the small Catholic school in Midtown.

Bellisario is demanding that the conservative K-12th grade school concede to him authority to hire and fire staff, control curriculum and make all health and hygiene decisions, including when to shut the school down. Failure to acquiesce to these demands means Holy Rosary will no longer be able to call itself a Catholic school or have priests celebrate Mass for children and staff, teach classes or hear confessions.

The school, which was founded by homeschooling parents in 1987 as an independent Catholic school, had until 5 p.m. on Oct. 25 to comply with Bellisario’s demands. As the deadline passed, the school board stood firm in its resolve to maintain control of its long-standing institution.

By 5:30 p.m. a large crowd was packed into the school’s small chapel to pray before the Blessed Sacrament, which was positioned on the altar. Kneeling in prayer, some wept at the prospect that this could have been the last time the sacraments would be available at the school. Each time the chapel door opened, worshipers looked to see if Bellisario or one of his designees had come to permanently remove the Body of Christ from Holy Rosary. They never showed, leaving the community to wonder when or if they would follow through.

The tension between Holy Rosary and the Archdiocese of Anchorage-Juneau has a long history, but it has never come to the point of cutting spiritual ties. Bellisario’s three predecessors all recognized Holy Rosary as a Catholic school in good standing with the church and allowed it to maintain its unique identity for more than three decades.

While the school has long fostered a deep Catholic devotion, including prayers before each class, weekly Mass and integration of the faith into every academic subject, it is also operated independent of the archdiocese. This means past bishops have never demanded to have direct control over how the school operates, but have chosen to respect the fact that the school was founded, built, funded and developed by private Alaska citizens wishing to create a faith-based school rooted in a rigorous classical approach to education.

Holy Rosary is nationally recognized by multiple Catholic accrediting societies, and regularly acknowledged as one of the top independent Catholic schools in the nation. It is also well known for promoting traditional Catholic faith and morals while providing a rigorous classics-based education rooted in Greek, Latin, church history and the Western cannon. Approximately 150 students attend the school, which historically attracts families from myriad faith traditions, or none at all.

Parents are typically drawn to the school’s strong academics and emphasis on traditional religious and family values. Controversial topics such as critical race theory, LGBTQ politics and other issues plaguing many of Alaska’s public schools have no place at Holy Rosary.

Bellisario’s demands have placed the school in an awkward position since he has sole authority to determine whether an institution in his archdiocese can call itself Catholic and thereby have access to priests to serve the community.

Holy Rosary’s school board and leadership have stated that they respect the archbishop and his legitimate spiritual authority, but they do not believe this extends to controlling virtually every area of an independent private school.

On Oct. 22, Bellisario issued an online statement claiming he did not want to wrest control of the school, but only wished to ensure it met what he called “minimum standards” to remain Catholic.

“I am not interested in controlling the personnel, curriculum, or business matters of Holy Rosary Academy,” he asserted. “But I am obligated to protect the interests of all the People of God in this Archdiocese., including those served by any Catholic school.”

Additionally, Bellisario wants to vet all visiting speakers or groups who work with the school and to “appoint or approve the teachers of religion,” while also reserving the right to remove them.

Unlike schools run by the archdiocese, Holy Rosary weaves religious teaching into every subject, which means every teacher is also a religious instructor and thus subject to being fired by Bellisario.

The school has made it clear, that it cannot agree to this level of control. On Oct. 23, the board of trustees issued a response to Bellisario’s Oct. 22 letter.

“In all things, the trustees and headmaster of Holy Rosary Academy are at the service of the founding mission of the school, and of our students and parents, and our accrediting body, which supports independent and Catholic schools,” the school response states. “We are also at the service of the Archbishop so far as possible without abandoning our duty to uphold the charter of Holy Rosary Academy as an independent institution.”

The letter explains that Holy Rosary cannot agree to all of Bellisario’s demands if it is to remain an independent school.

“We continue to pray for his Excellency and his team and ask that our tabernacle and access to priests remain for our teachers and students,” the school stated. “We are unable to understand how civility and pastoral care could involve the removal of the sacraments from our campus and respectfully request for Father (Pat) Travers and Archbishop Bellisario to speak to this question.”

Others from the school have expressed bewilderment that Bellisario would ban the sacraments from school children while continuing to allow high profile pro-abortion politicians like Sen. Lisa Murkowski to access Holy Communion in local parishes. Additionally, area Catholics have raised concern for decades about the fact that Providence Alaska Medical Center provides a litany of medical services that directly oppose the church’s moral teachings. This includes contraception, sterilization and cross-sex hormones for those who wish to appear as members of the opposite sex.

As of Tuesday morning, Oct. 26, the sacraments have not yet been removed from Holy Rosary, according to Headmaster Mark Newcomb.