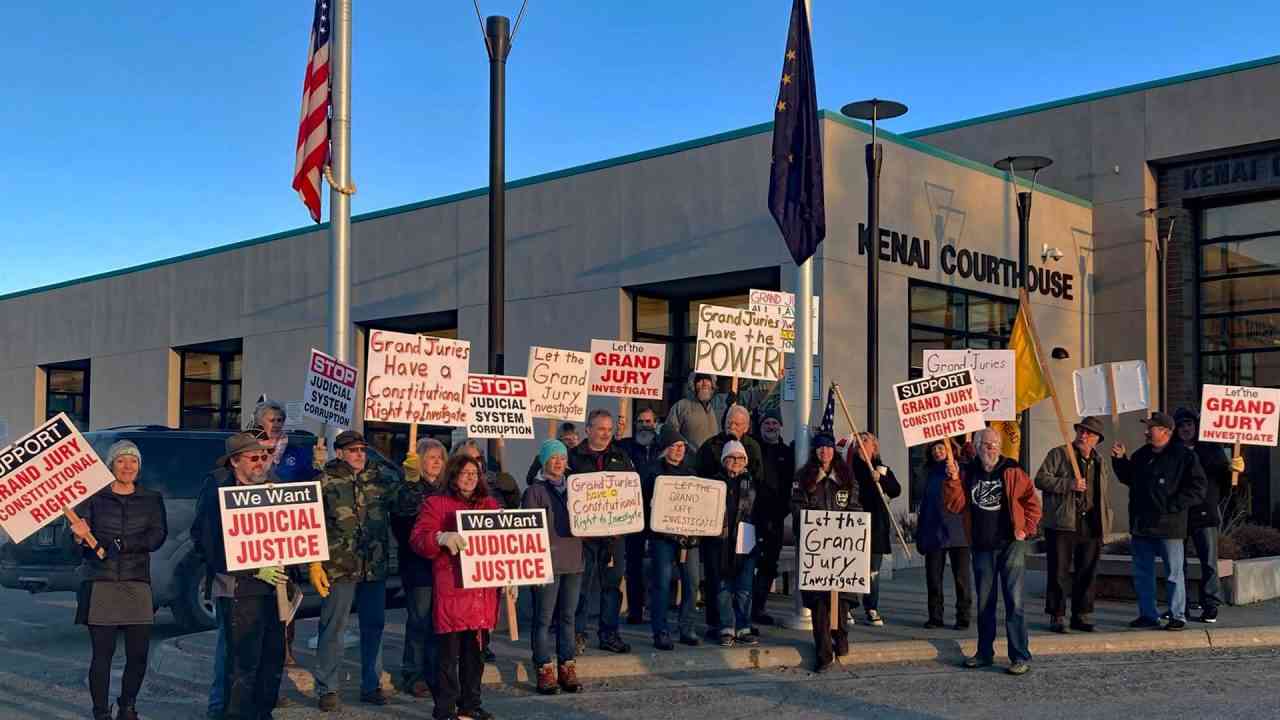 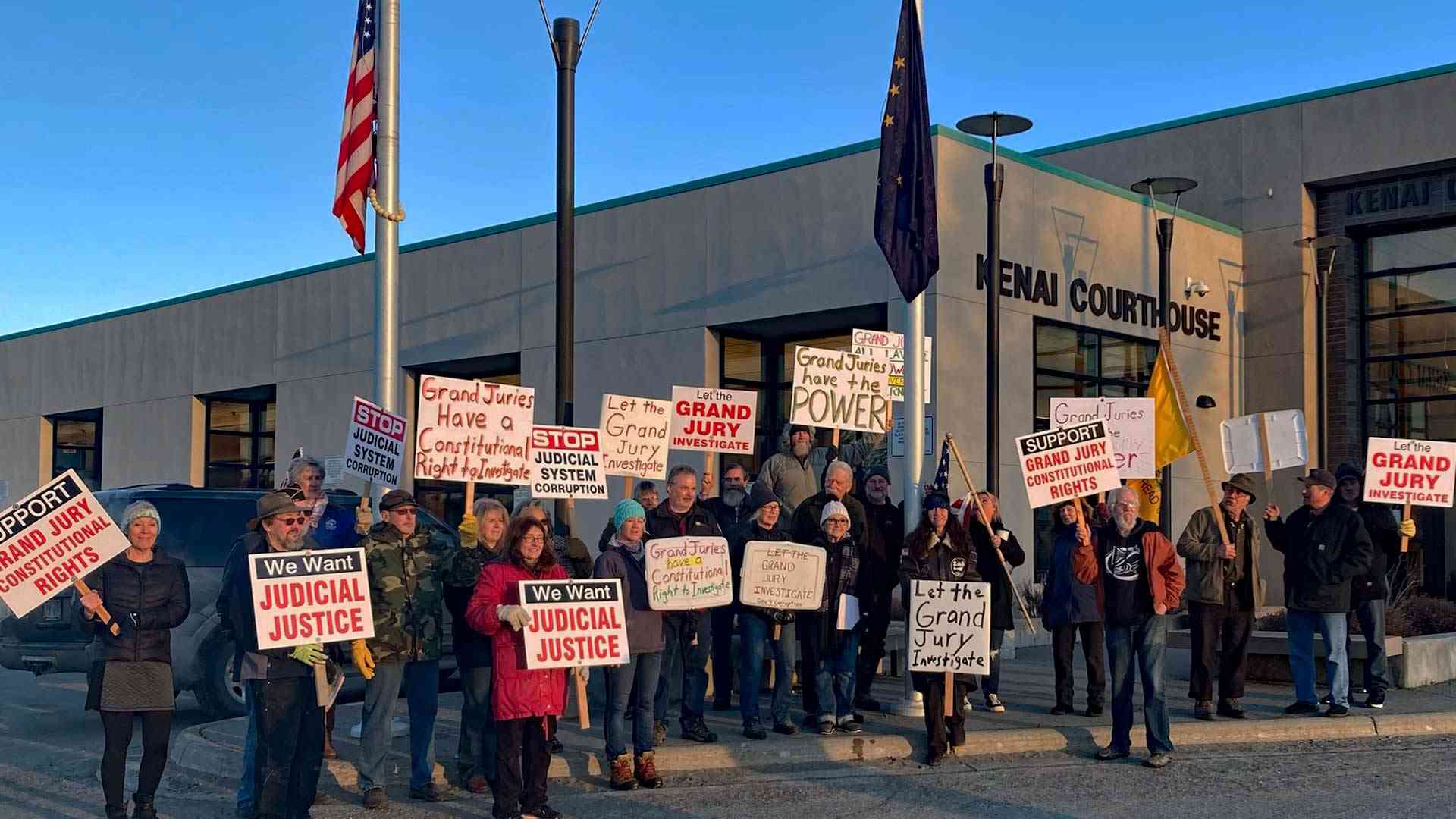 Alaskans concerned about the inability of state grand juries to investigate corrupt judges and officials, held a protest outside the Kenai Courthouse on March 30. The next demonstration is set for Wednesday, April 6.

According to protesters, this is the fifth grand jury in the past few years that tried to investigate evidence that Alaska’s only judge investigator for the past 33 years – Executive Director of the Alaska Commission on Judicial Conduct Marla Greenstein – is falsifying official investigations, and thereby allowing corrupt judges to remain on the bench.

“All five grand jury investigations have now been successfully stopped – by the very public officials the grand jury was trying to investigate,” a statement from the protesters notes. “To give everyone an idea of how very serious this is: the judge investigator gets about 20 complaints a month. 20 times 12 months times 33 years = about 7,920 judge investigations this single person has been responsible for conducting. Not a single other person has ‘audited’ this person’s work in 33 years.”

The statement adds that when five separate grand juries attempted to audit Greenstein’s work – as they are constitutionally able and required to do – “government officials, including implicated judges and Alaska’s Deputy Attorney General John Skidmore, stepped in to personally order the grand juries to stop investigating.”

The next protest is set for April 6 at 7:30 a.m. outside the Kenai Courthouse. The goal is to let the grand jurors, who meet every Wednesday, see that citizens support their right to conduct key investigations in corruption by state officials.

“We hate to keep asking, but we need everyone possible to attend once again – to protect our constitution from high-level officials who think we will, and can, do nothing if they violate it,” said Alaska Grand Jury Rights founder David Haeg. “Bring your kids, friends, and neighbors!”

To see recent grand juror affidavits, evidence of corruption, or to learn more about grand jury rights and duties in Alaskan, click here.

— Alaska Constitution, Article 1, Section 8 The power of grand juries to investigate and make recommendations concerning the public welfare or safety shall never be suspended.

— AS 12.40.030 Duty of inquiry into crimes and general powers. The grand jury shall inquire into all crimes committed or triable within the jurisdiction of the court and present them to the court. The grand jury shall have the power to investigate and make recommendations concerning the public welfare or safety.

— AS 12.40.040 Juror to disclose knowledge of crime. If an individual grand juror knows or has reason to believe that a crime has been committed that is triable by the court, the juror shall disclose it to the other jurors, who shall investigate it.

— Alaska Constitutional Convention (page transcript 1307-1409): The power of grand juries to inquire into the willful misconduct in office of public officers, and to find indictments in connection therewith, shall never be suspended. The grand jury is preserved, for all purposes, particularly for investigation of public officials. The grand jury can be appealed to directly, which is an invaluable right to the citizen.

— Alaska Grand Jury Handbook, Page 16: Can a grand juror ask the grand jury to investigate a crime that the district attorney has not presented to them? Yes. The Alaska Statutes state: “If an individual grand juror knows or has reason to believe that a crime has been committed that is triable by the court, the juror shall disclose it to the other jurors, who shall investigate it.”

— Alaska Grand Jury Handbook, Page 26:  It will be up to the grand jury to decide whether to investigate.

— AS 11.56.590. Jury Tampering. (a) A person commits the crime of jury tampering if the person directly or indirectly communicates with a juror other than as permitted by the rules governing the official proceeding with intent to (1) influence the juror’s vote, opinion, decision, or other action as a juror; or (2) otherwise affect the outcome of the official proceeding. (b) Jury tampering is a class C felony.