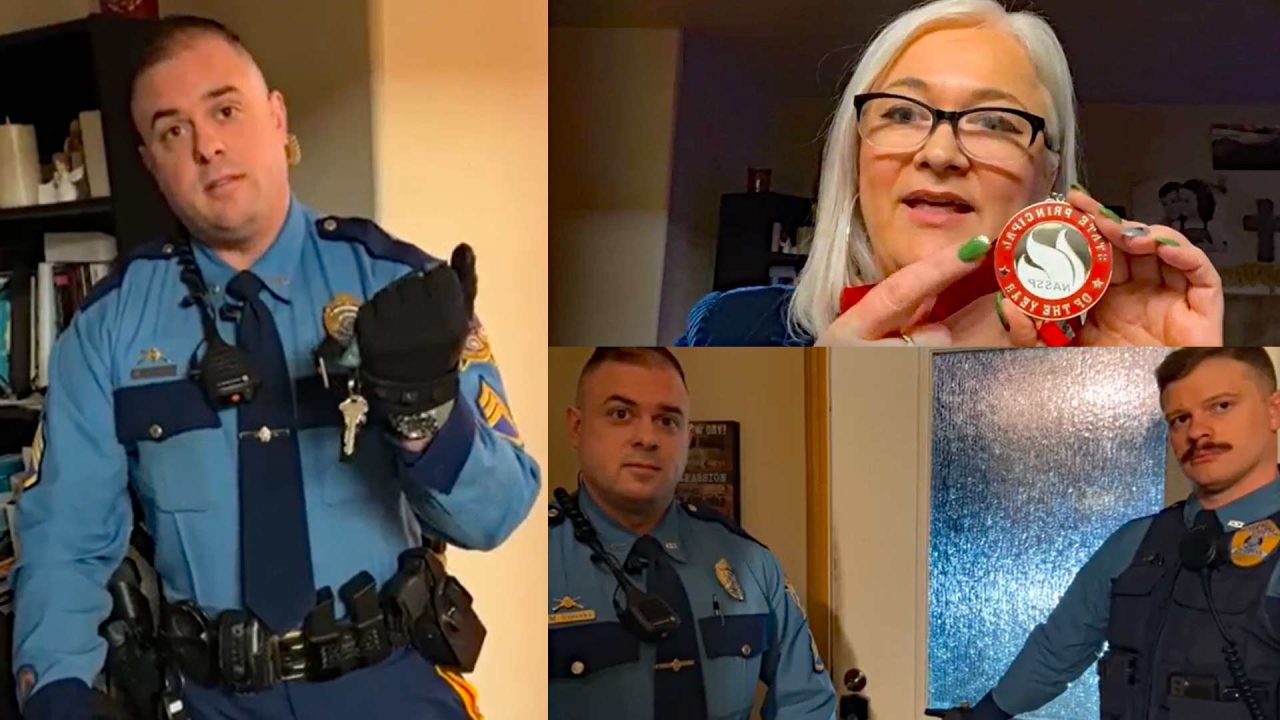 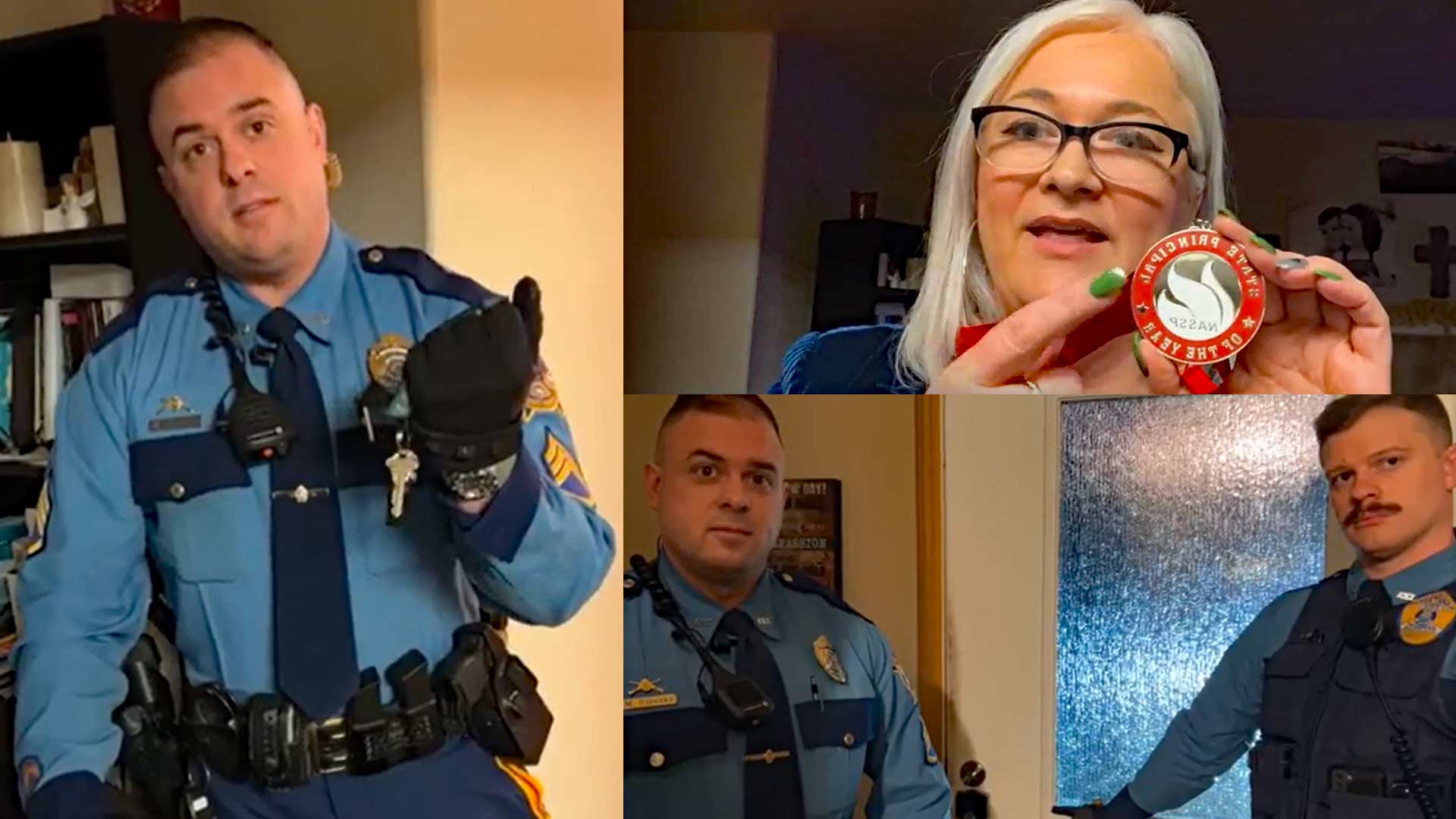 One of the most widely respected school principals in Alaska was taken from her Mat-Su home to Mat-Su Regional Medical Center on Jan. 18, three days after posting a four-hour video recounting a profound spiritual experience that she says has changed her life.

Mary Fulp is the current principal of Colony High School and the 2022 Alaska Principal of the Year. She served 15 years as principal of Colony Middle School, where her work with students and staff earned her widespread respect and honors throughout Alaska’s educational community.

On Jan. 15, however, she posted a Facebook Live video, which has been viewed more than 4,200 times. In the video Fulp speaks enthusiastically about her love for Jesus Christ, while recounting a recent spiritual experience in which says she received the gift of tongues and a renewed sense of the Holy Spirit in her life.

In the long and sometimes rambling video, Fulp speaks of the pressing need to bring the love and truth of Christ to schools and throughout the wider culture.

At the beginning of the video, Fulp said she hadn’t eaten or slept much, but that she was filled with God’s love and excited to share her testimony with the world.

After the video post, Fulp wrote on Facebook that some of her family members later came to her due to a concern that she was not mentally well.

According to Fulp, she asked her family to leave after their conversation proved unproductive. They refused, and then called the Alaska State Troopers to intervene.

Fulp said a Trooper showed up at her door.

“She asked me if I wanted them trespassed and I said, ‘If they don’t leave, then we can have that conversation, but please ask them to leave,’” she wrote on Facebook.

Fulp noted that the Trooper found her to be of “sound mind and body when she met with me.”

After the children left, Fulp later received a visit from two other Troopers who said they had a court order to take her to Mat-Su Regional Medical Center for a mandatory psychological evaluation.

Fulp recorded a live Facebook video of the officers who came to her door to detain her.

“It’s called an ex parte order, which means they got the order without your input,” one officer explained while standing in Fulp’s entryway.

“So, they got the order without my input, because I just set some very clear boundaries that I wanted them to back off,” Fulp told the officers. “They didn’t honor those boundaries. A Trooper came by earlier and asked me if I wanted them trespassed, and I said, ‘Only if they don’t leave.’ So, they left and came back, and this is what I get.”

She added: “I’m getting taken to the hospital for claiming that Jesus is King and claiming that I stand with the Marin Luther King civil rights movement … So, I would like to see this show up in the news.”

“This is the level of threat we are at,” Fulp continued in the video as officers prepared to take her away. “I am fighting for all of the injustices that have ever been done because it’s being done to me now. People are claiming I’m crazy…”

An officer then interrupted her and said she was free to continue recording live on her phone, but “we’re not going to delay this all night.”

“If my family can’t get in my door because I’ve asked them to stay away because they’re not invited in, then they send you guys – that’s wrong,” Fulp told the officers at her home.

“I have to go to the doctor because I claimed that Jesus is King?” Fulp responded.

“All I know is the court order says we have to take you to the hospital,” the Trooper said.

He then directed Fulp to get her shoes and coat.

“We’re not trying to make this any worse than it has to be,” he said.

Fulp was polite and compliant, but continued to object to what was happening.

“If my family can’t get in my door because I’ve asked them to stay away because they’re not invited in, then they send you guys – that’s wrong,” she said.

The Trooper responded by saying her family was “concerned about you.”

The officers then watched as Fulp got her jacket, claiming they were observing her to ensure she was “safe.”

“I’m sorry you guys are in the middle of this,” Fulp said. “I know it’s not your fault.”

While one of the Troopers checked her pockets for weapons, Fulp said she was only “armed with the Cross.”

“Okay. Awesome,” Fulp said. “You know there is power in his name … His power is mightier than any of this worldly stuff.”

“You got to put things back in their proper order,” Fulp said. “And so here I am getting a psych eval because I love Jesus.”

Fulp was then escorted to a Trooper vehicle parked outside her home, and placed in the back seat.

“I’m actually being taken away because I love Jesus,” Fulp said as the video continued from the back of the vehicle. “I’m in the back of a cop car for my testimony.”

During the short ride to the hospital, Fulp said she hopes “everyone, everywhere sees this and drops to your knees, because we need Jesus so bad.”

“Yes, this is scary, because I said Jesus is King,” Fulp continued. “When God anointed me with 2022 Alaska Principal of the Year Award, he knew that it was for his glory. I just didn’t know when it was going to magnify him in that way … This is how it has shown up.”

Fulp said her “anointing” with the Holy Spirit must have scared those who don’t have the ability to speak in tongues.

“They just don’t understand it,” she said.

Speaking in tongues is a practice that dates back to the beginning of Christianity, and is described in the Bible as a gift from God that allows believers to occasionally pray in spiritual languages that are often later interpreted by others in the community. Today, it is most associated with charismatic and Pentecostal faith communities.

Fulp’s video from the Trooper vehicle continued with appeals for Christians to share the love of God to the world, including in public schools where she said children are suffering immensely.

“I mean, I’m claiming all of the biblical principles, and this is where I go – to the hospital because they think I’m crazy, because the world is such a mess that it takes someone bold to say, ‘You got to put things back in their proper order,'” she said. “And so here I am getting a psych eval because I love Jesus.”

The 20-minute video ends outside the hospital, when a Trooper tells her that she has to “say your goodbyes on your phone because we’re going to the hospital and there’s people private information there and they’re not consenting to being filmed.”

The Watchman has attempted to reach out to Fulp via email, but there has been no response as of publication.

Trooper spokesman Austin McDaniel said he cannot confirm or deny any situation regarding Fulp due to state statute, which he said, “prevents me from disclosing, confirming or acknowledging any of the information associated with that contact.”

He did confirm that Troopers are aware of video, but he could not legally disclose any information.

“I’m really kind of boxed into a corner and can’t say anything additionally,” he said. “That’s the information, I am legally allowed to provide.”