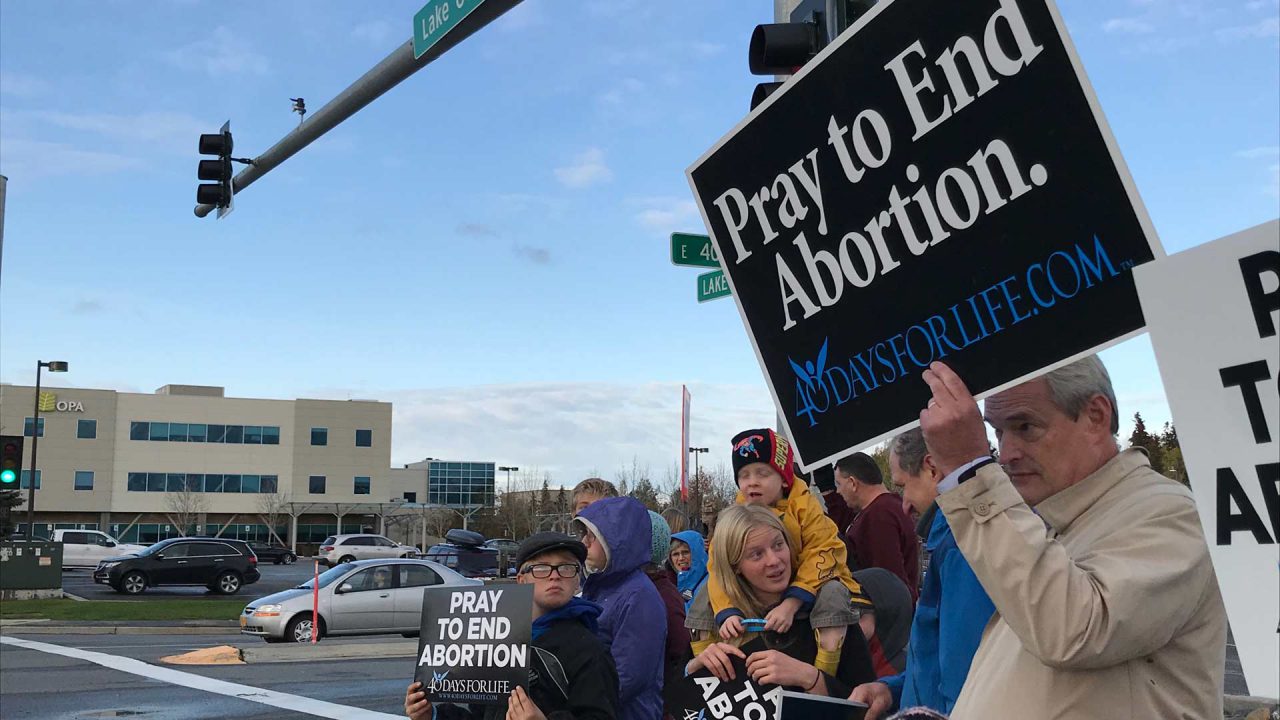 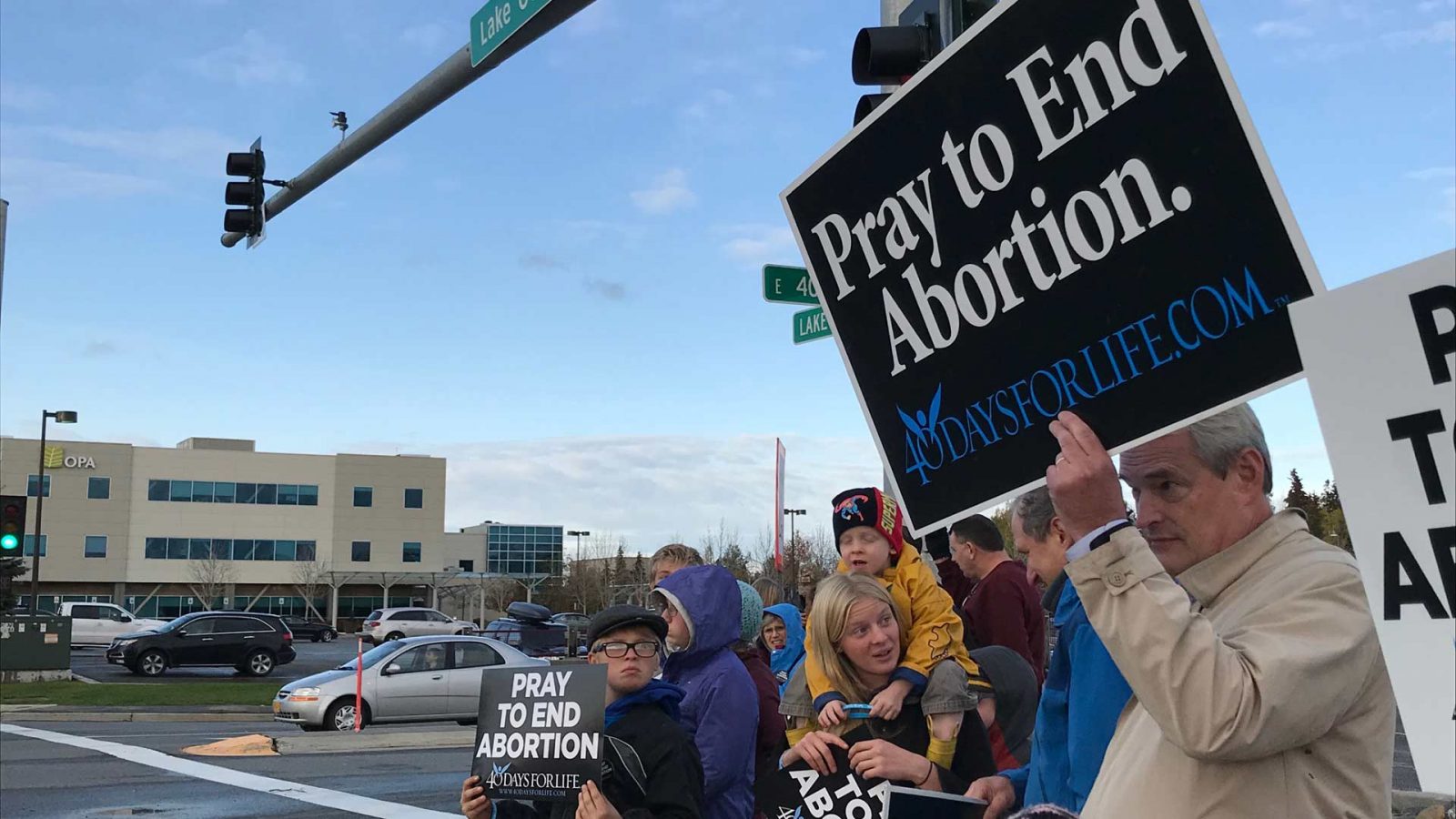 Roughly 50 pro-life advocates braved cool fall temperatures outside the Planned Parenthood abortion clinic in Anchorage on Sept. 25 for the start of a 40-day campaign of prayer and fasting for an end to abortion in Alaska.

The event was one of more than 500 happening around the world during the annual 40-Days for Life campaign, which occurs each spring and fall.

Gathered with others along the heavily trafficked Lake Otis Blvd., one Anchorage woman came to pray outside the very clinic where she once had an abortion.

“I know what it is like to be set free with Jesus and it is very encouraging,” said Kayla Alderson “In my younger days I went in there and I got an abortion.”

After being invited to attend her first pro-life vigil this past spring, she now hopes to save others from experiencing what she went through.

“A highlight was when I was leading one of the spring campaigns,” he said. “And the Lord used that to actually save some twins. I got a call from one of the volunteers here who told me about it – there was just this overwhelming joy.”

“I want to encourage someone who ever had one – that it doesn’t have to be like that for the rest of your life,” she said.

“There are a few people who don’t agree with us, but I understand where they are coming from,” she said. “They are not in a place to understand us, but we’re here to pray for them whether they want us to pray for them or not – no matter what they say to us.”

The opening kickoff included families, children and seasoned pro-life advocates all standing on the sidewalk amid rush-hour traffic. A steady stream of friendly honks was mixed with other drivers who hurled insults. The vigil keepers quietly held signs that read, “Pray for an end to abortion.”

Jerad McClure, who first began attending 40-day vigils in 2011, said he was initially scared to pray in such a busy public place.

“I had a lot of trepidation at first, but once you get down here, you realize that it’s not about you,” he said. “You are trying to help someone move away from making a very bad decision in their life.”

While results not always apparent, McClure has seen verifiable results from publicly praying outside the abortion clinic.

“A highlight was when I was leading one of the spring campaigns,” he said. “And the Lord used that to actually save some twins. I got a call from one of the volunteers here who told me about it – there was just this overwhelming joy.”

He observed that many of those who disagree with the vigil have been taught by a “culture of death” that no longer values innocent unborn life.

“You don’t know how many people you have actually saved,” McClure added. “Because there are so many people who just turn around or they just drive by. You don’t know if those are saves, but when you have confirmation, I can’t describe the euphoria. When you save a child, it is awesome.”

For those who are on the fence about actually coming out to pray this fall, McClure offered encouragement.

“Take a leap of faith. It’s not hard,” he said. “Showing up with a simple sign can have a major impact. All that lady said was ‘I’m keeping them because of your sign.’”

To open the vigil, Father Robert Whitney of St. Elizabeth Ann Seton Church in Anchorage offered a prayer and a few comments.

“We are here to pray for life,” he told the crowd. “To pray that what happens in this building will be stopped and that every life will be respected.”

Whitney said he first began praying outside abortion clinics when his mother brought him as a child.

“I was very blessed that my mother brought me here,” he said. “It’s true that we may have many comments that are negative or insults that are thrown or objects that are thrown, but we always want to do this truly holy work with dignity and with respect.”

He observed that many of those who disagree with the vigil have been taught by a “culture of death” that no longer values innocent unborn life.

“Many of them don’t know any better,” Whitney said. “They act from ignorance and we don’t want to return that ignorance. Rather we want to show them the love that fills our hearts – this love that every Christian should bear towards everyone. We should hope and pray that they will be converted by our example and our prayers.”

Pat Martin, this year’s organizer, urged participants to stay vigilant, noting that the “no-show” rate for abortion appointments at Planned Parenthood goes as high as 70% during the vigils.

“We didn’t come out here to win a popularity contest,” he said. “We came to make a statement to our city and state that abortion is unacceptable.”

Click here to learn more about how to participate in the ongoing 40-Days for Life vigils in Anchorage and Soldotna.