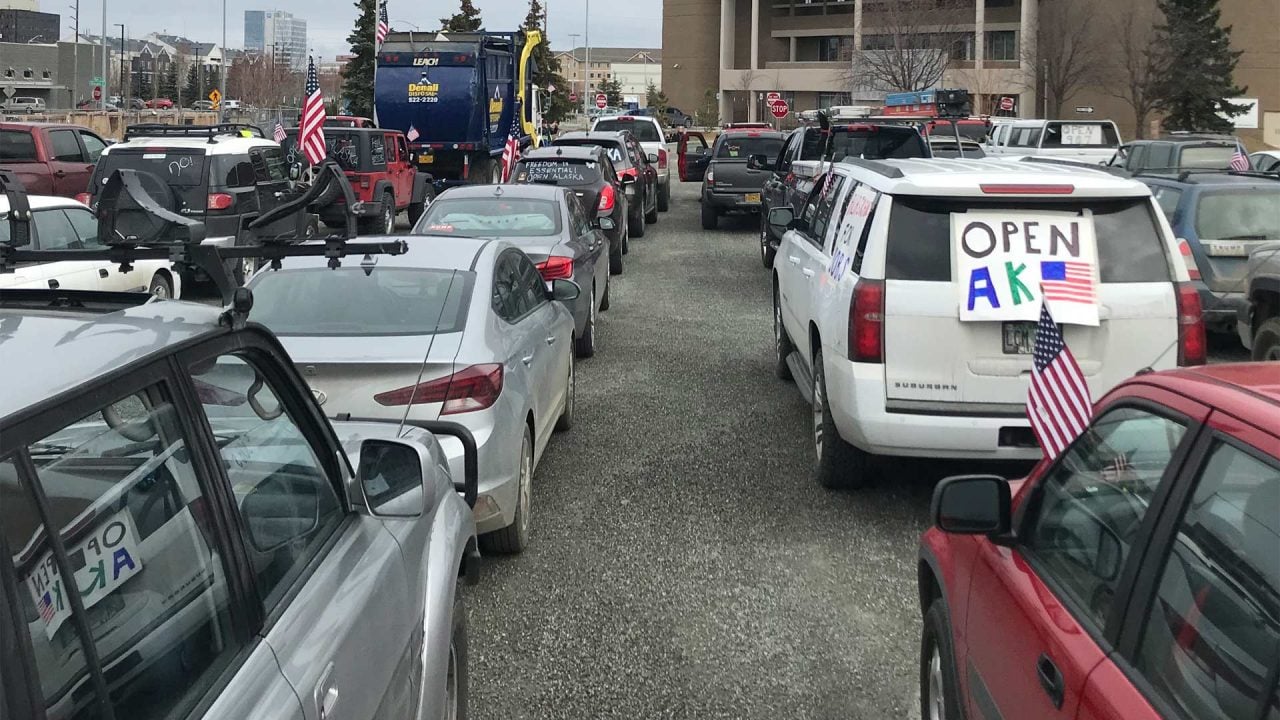 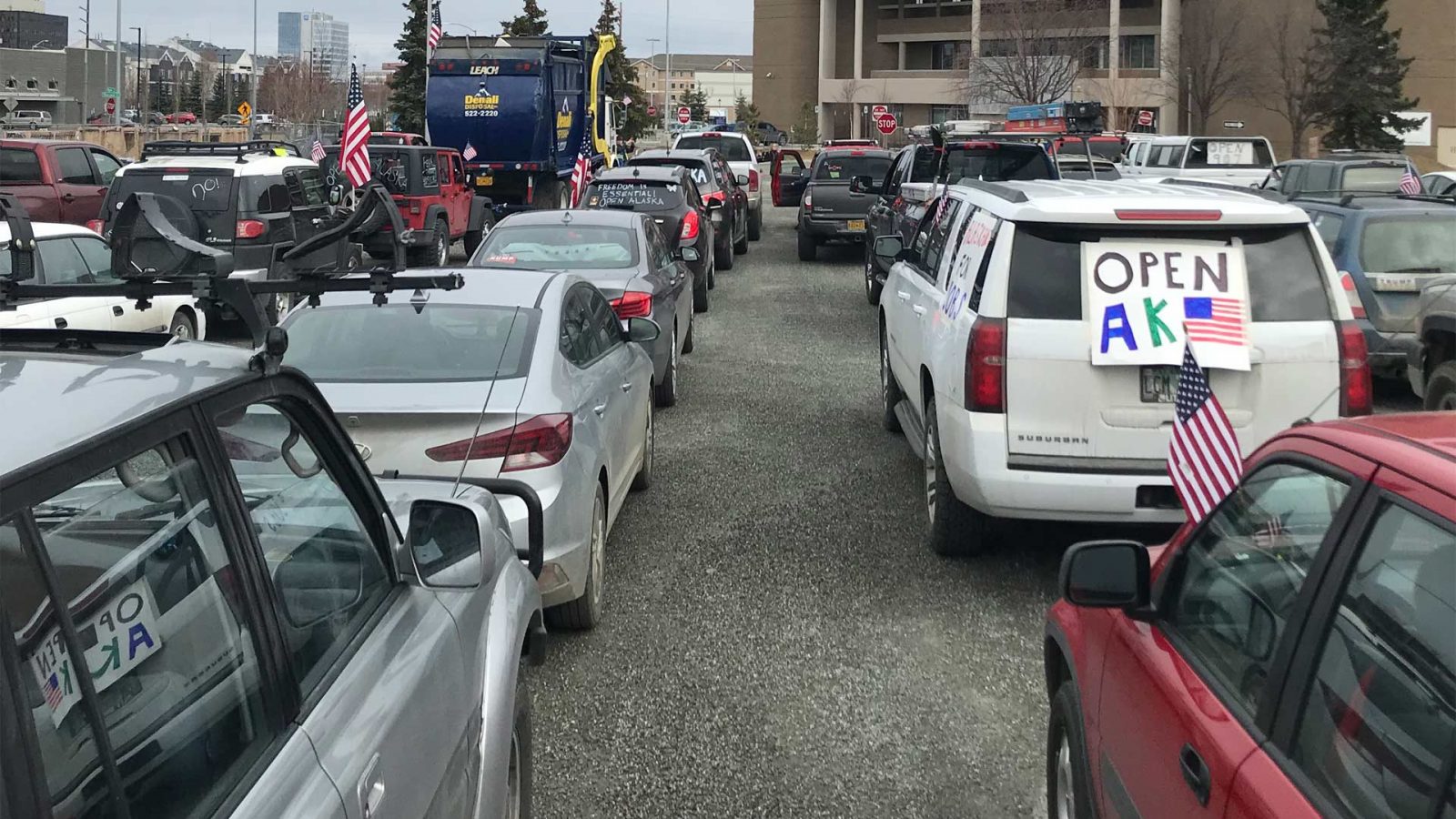 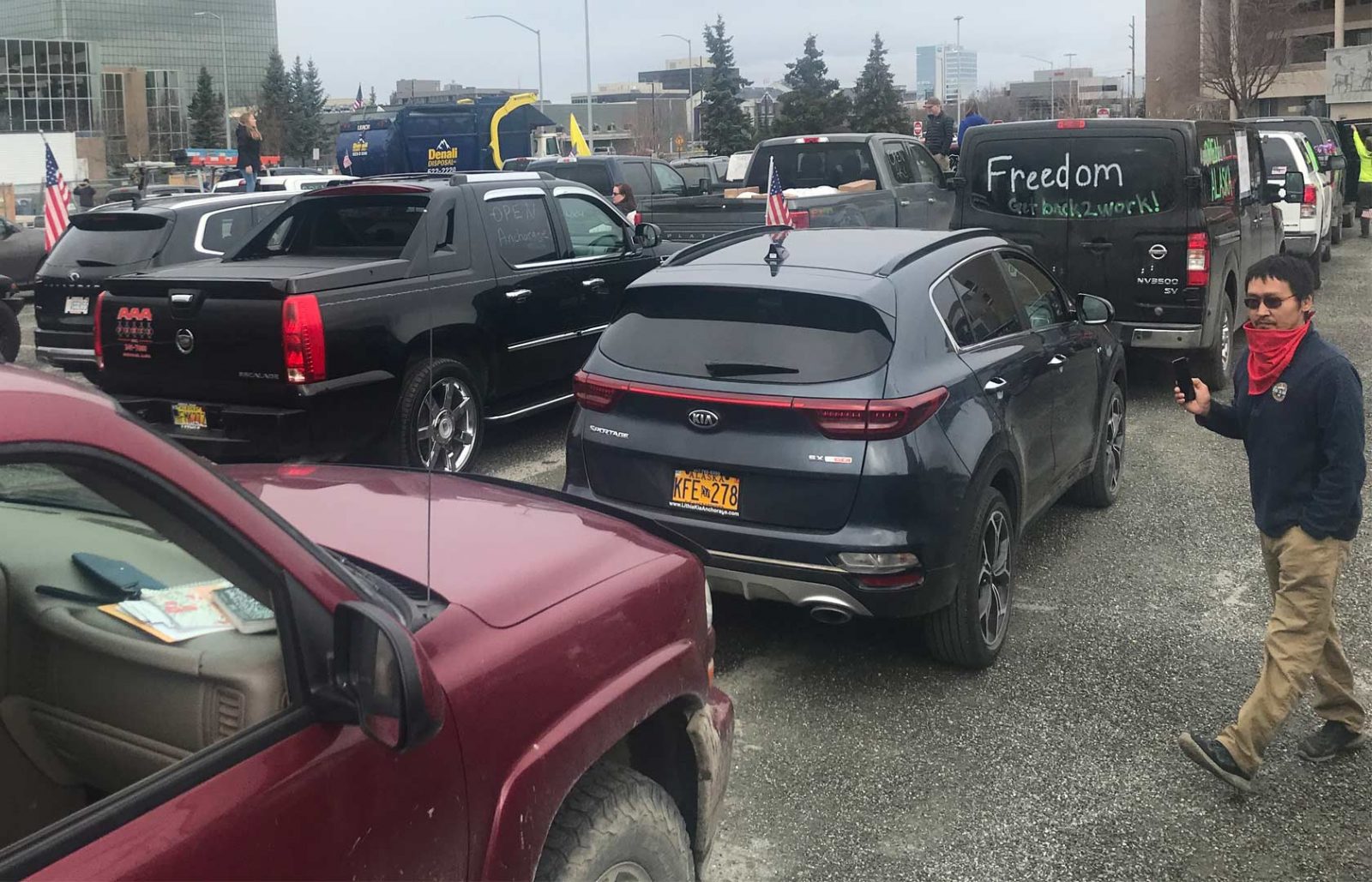 The blare of protesting horns echoed through downtown Anchorage as hundreds of cars rolled past city hall and the offices of Anchorage Mayor Ethan Berkowitz on April 22.

Alaskans struggling to maintain their livelihoods under city and statewide health mandates packed their vehicles into the Loussac Library parking lot and proceeded in caravan through the streets to let elected officials know they are ready to work while practicing social distancing and health guidelines.

Anchorage resident Rose English, who operates Rockin’ B Ranch said her goal was to let Berkowitz know that it’s not fair for him to exclude non-essential businesses from operating.

“Open my business now – I can do social distancing,” she said. “We can wear masks. I have gallons of sanitizer. There is no reason why I should not be open.”

Like many business owners, English has fixed overhead costs that don’t go away during an economic shutdown.

“I have to do my summer horse camps,” she said. “If I can’t make any money in the summer, I’m not going to be able to feed the horses.”

As vehicles rolled past city hall, Mayor Berkowitz was finishing up a press conference, where he announced plans to coordinate with new statewide protocols by Gov. Mike Dunleavy to allow many businesses to open starting April 27. The state is allowing non-essential businesses to begin operating on April 24 with safety measures in place. Anchorage will follow three days later.

The mayor’s latest press conference struck a very different tone than the one he held on April 20, in which he gave no timelines for reopening the city.

“I hope he realizes that he works for us and he hears what we are saying.”

That did not sit well with Steven Patrick.

“We’d love to see Berkowitz back down and work with the governor who has every intention of opening us up in a healthy way,” he said. “Nobody is denying that COVID-19 exists. It is a big deal. It’s an unknown. You have to be careful, but at the same time, it has gone on long enough. We can live safely among each other.” 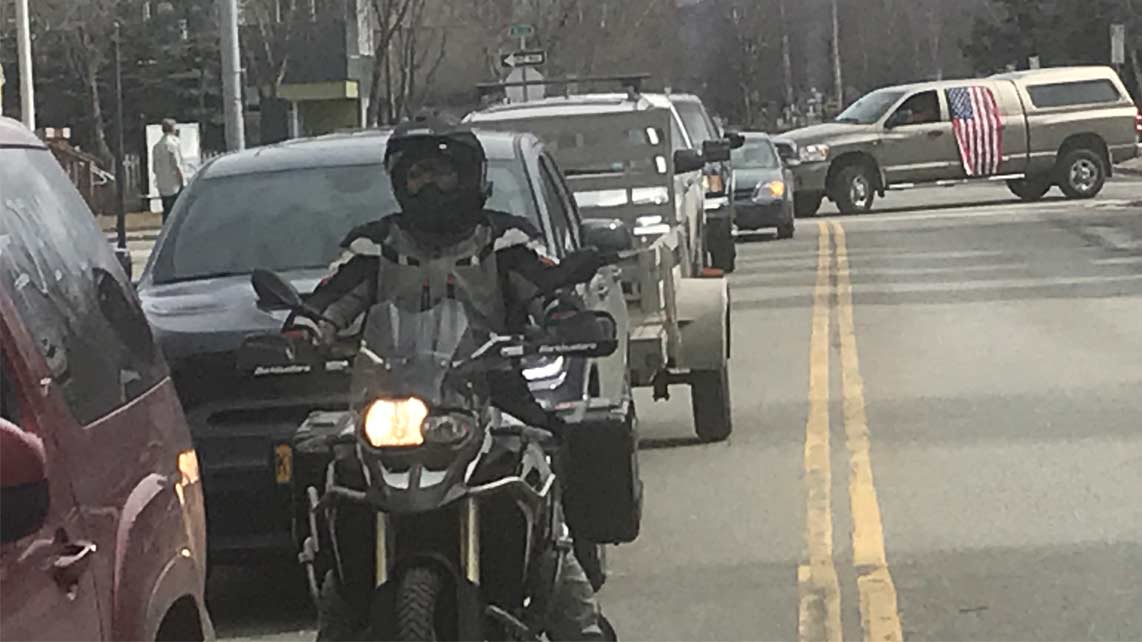 “I know a lot of people who are affected by this,” she said. “I hope he realizes that he works for us and he hears what we are saying. The gist of what I’ve gotten from what he’s said in the last few days is that he doesn’t care what we have to say. We are not asking for anything that did not already belong to us.”

When asked about the protesters, Berkowitz said he could sympathize with the desire to reopen Anchorage.

“If that’s their sole goal, I would say we agree on that,” he said. “I just have a disagreement on what the timing is. They are exercising First Amendment rights which is one of the freedoms that we have here.”

Berkowitz seemed to walk back some of his statements from two days prior, in which he indicated that Anchorage was not ready to reopen non-essential businesses.

Berkowitz went back to a statement he made on April 20 – a claim that protesters don’t reflect Anchorage as a whole, and that he won’t be pressured into making decisions.

“There are a large number of people who are maybe not protesting but who are standing on the side of saying ‘we are hunkering down because that is the safe thing for us to do,’” he said. “The amount of input I get from people who want to make sure that we move ahead slowly and deliberately is also something that we pay attention to.”

Berkowitz seemed to walk back some of his statements from two days prior, in which he indicated that Anchorage was not ready to reopen non-essential businesses.

“We are in a place that gives us confidence that we can move to the next step,” he said April 22.

Berkowitz noted that the city will operate largely off the state’s mandates, but with some slight differences.

Phase one of the state’s plan includes allowing dine-in options for restaurants so long as they stay at 25% capacity or less and all group seating is from the same household. The state will also permit most retail stores to open with limits on in-store customers. Barbershops, salons and hairdresser will be able to operate, as will engineering and communication companies, fishing charters and others.

Bars, theaters and bowling alleys will remain closed, but gyms and fitness centers will be allowed to provide outdoor activities and classes.

The state will also ease social distancing by allowing gatherings of less than 20 people.

“We are always going to put health first,” Dunleavy said. “But we do believe we can begin reopening.”

Mandates on interstate and international travel will remain in place for now.

Crum said the state is looking at May 6 as a possible date to open additional sectors of the economy if the pandemic remains under control.

Gov. Mike Dunleavy said he has spoken extensively with mayors across the state, including Berkowitz, and that different communities may choose to implement out certain guidelines differently. Overall, he said the state is in a good position to begin ease restrictions.

“We are always going to put health first,” he said. “But we do believe we can begin reopening.”

Business owners who have questions about whether their company has permission to operate are encouraged to contact the state at covidquestoins@alaksa.gov or by calling 211 or 800-478-2221. The phone lines will be open 7 a.m. to 8 p.m. seven days a week.