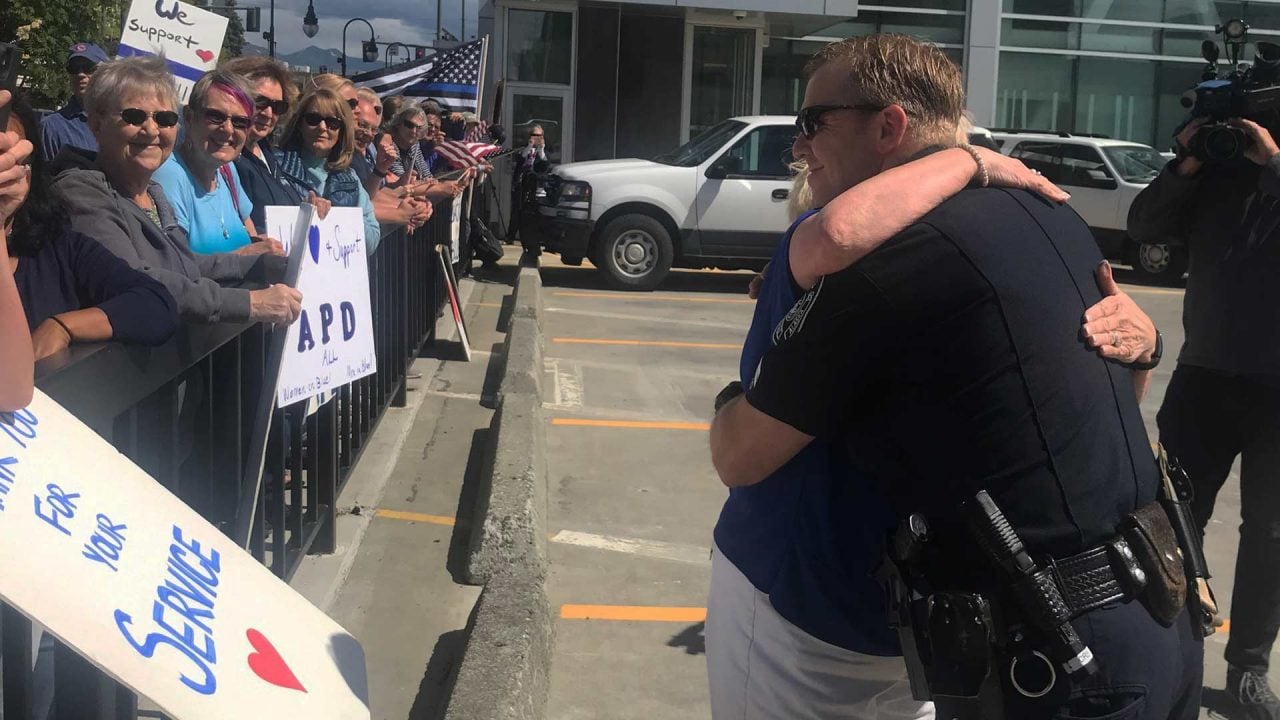 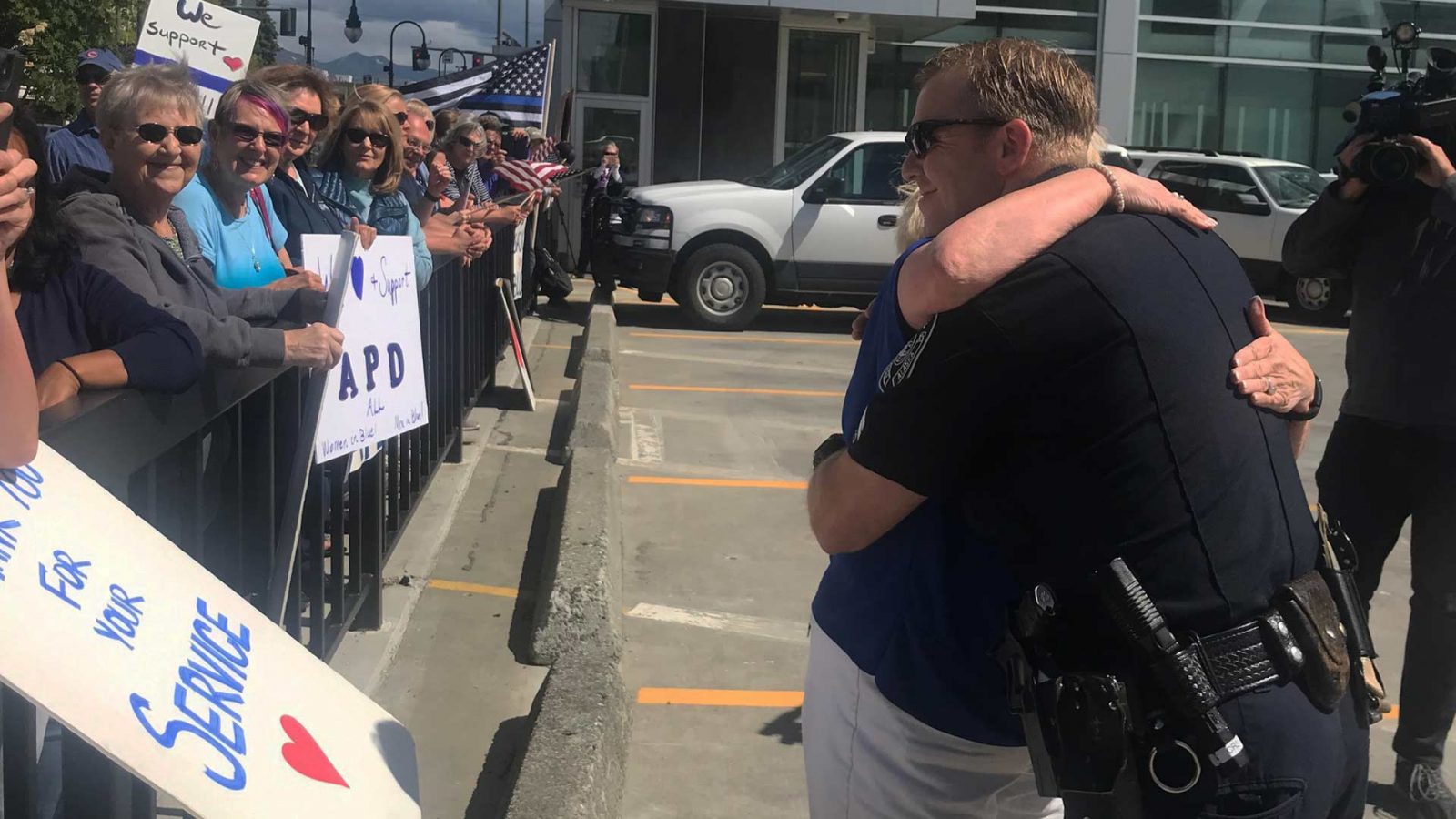 Officers returning from their shifts were met with a surprise street party outside the Anchorage Police Department’s downtown headquarters on June 18. Nearly 150 Alaskans rallied on short notice to show support for their men and women in uniform. 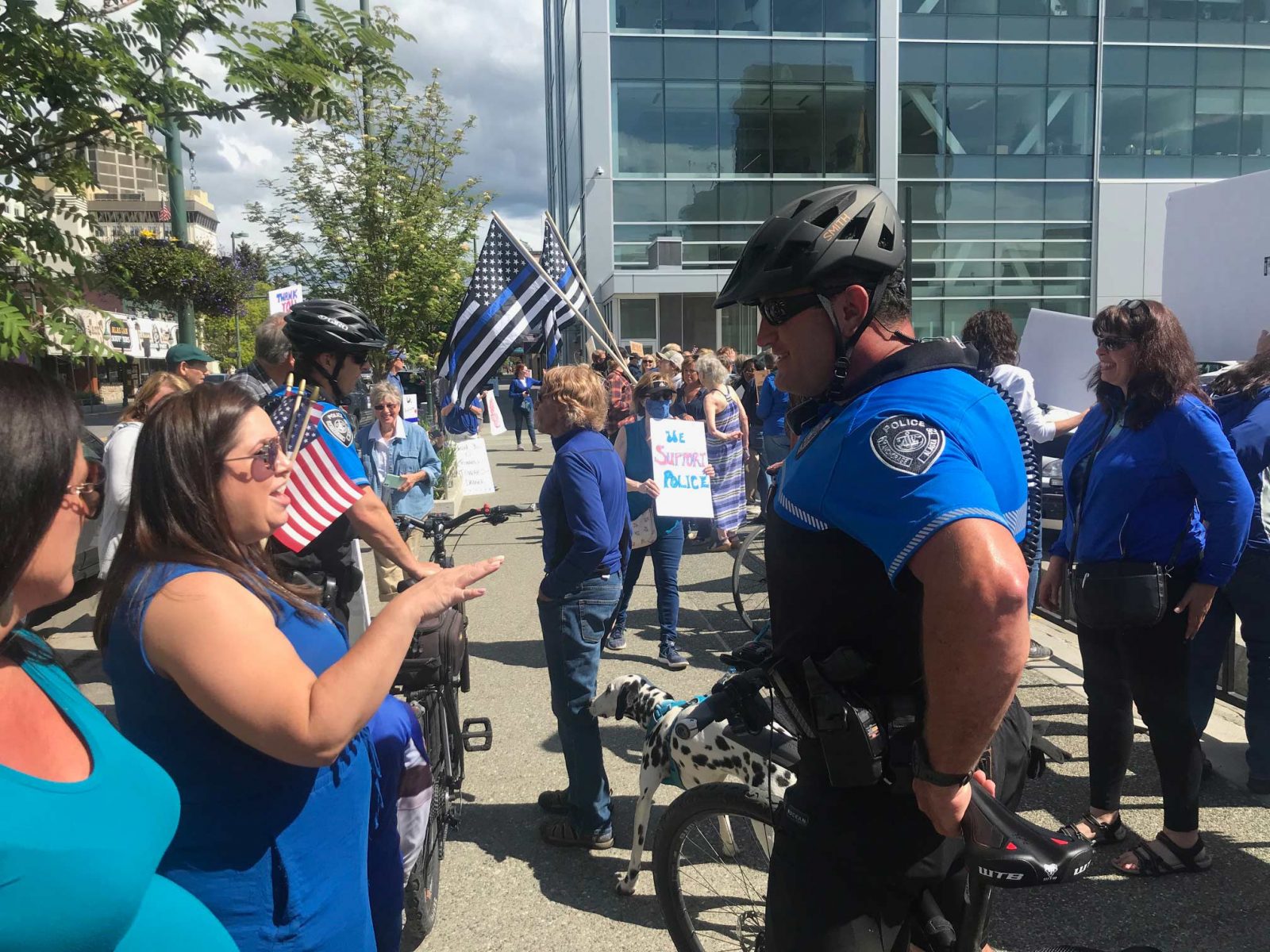 Supporters talk with police officers during a rally for law enforcement in Anchorage on June 18.

“Thank you for your service! We love you!” people cheered as officers pulled their squad cars into the parking lot. Some officers smiled, waved and nodded as they walked past homemade signs, balloons and flags waving in the sunshine.

The mastermind behind the pep rally was well-known Anchorage conservative Judy Eledge. She wanted to show local police officers that they have supporters despite the negative press and derogatory comments directed at law enforcement over the past couple of weeks.

The death of George Floyd, an unarmed black man who died while in custody of Minneapolis police last month, has sparked protests across the nation, some of which have turned violent. Alaska protests have remained peaceful, but there have still been calls to defund entire police departments and officers have endured insults from angry crowds.

Nationwide, more than 800 officers have been injured in various riots.

“I just think it is a disgrace that our police are being treated this way,” Eledge said. “We shouldn’t judge everyone by one man’s action. The policeman who killed George Floyd – it was wrong, and he should be in the trouble he’s in. But that doesn’t mean that every police officer should have to worry about protecting us because they may be called a racist.”

“I have a lot of friends who are police and they are demoralized right now,” she added. “Everyone’s afraid to show support for the police, but we wanted to show that we are not afraid. We are the silent majority and there’s a whole bunch of us out there.”

Several local Republican politicians, including Rep. Mel Gillis, Laddie Shaw and Josh Revak,  showed up after finding out about the event through word of mouth.

“I came down because I think the narrative out there is overwhelmingly against law enforcement,” he said. “I know a lot of folks in law enforcement. They do it because they want to help the community and serve the community of all different races, backgrounds and creeds. And I think it’s unfair to just stereotype.”

“They sacrifice themselves and potentially their lives, and they need to know that they are appreciated.”

Revak agreed that police departments should remove back actors but said there are a lot of very good officers.

“They’ve been under so much heat and they are probably feeling pretty down,” he said. “I wanted to come here and let them know that we do appreciate the good work they do.”

Rep. Shaw has served in the Navy Seals, the Naval Reserve, the Alaska Army National Guard and the Alaska State Troopers.

“I will always support police. It is very honorable, and it is an organization with a lot of integrity,” he said. “These are people who take care of us without any appreciation.” 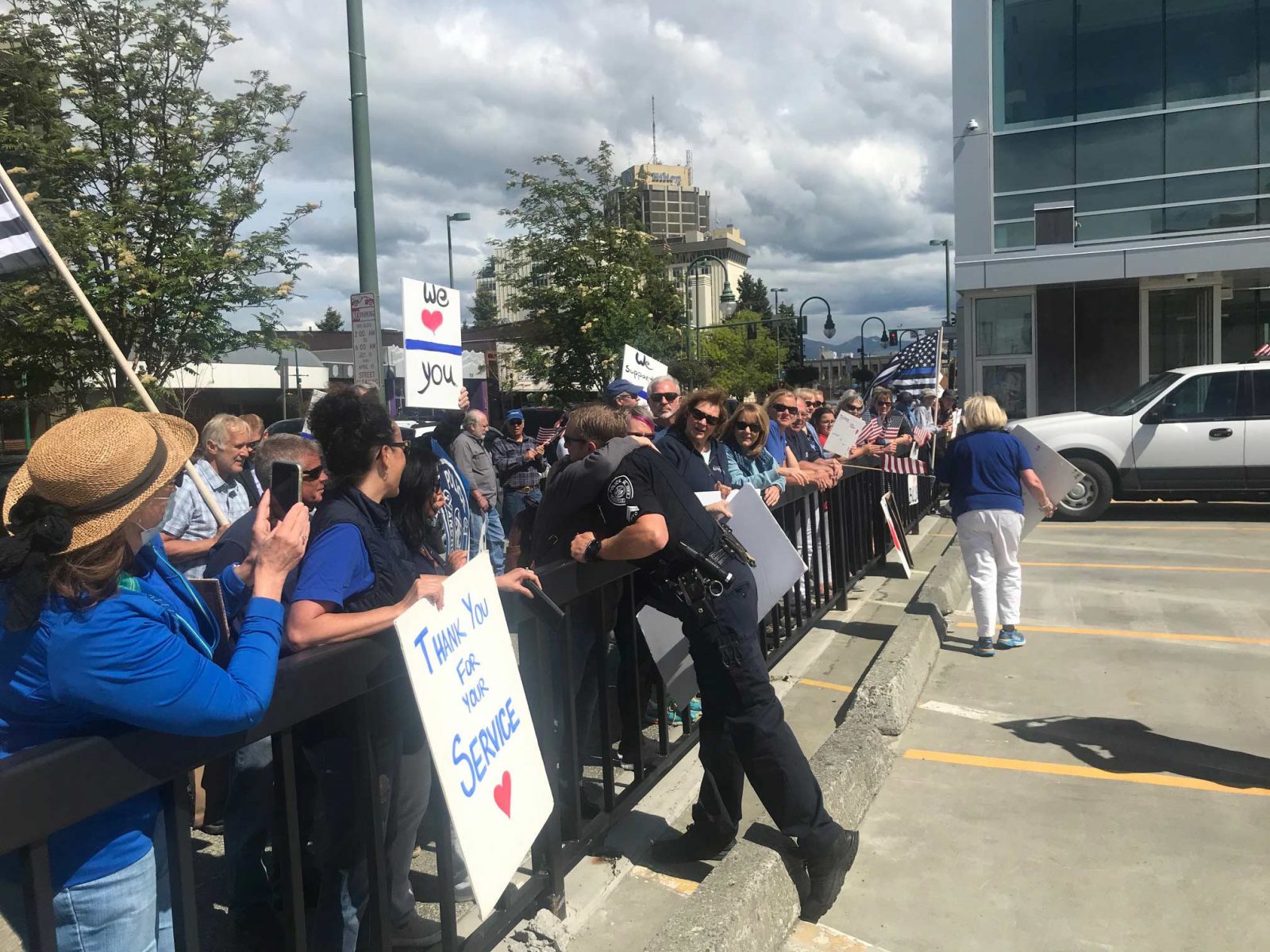 A crowd of supporters show appreciation for Anchorage police officers during a June 18 rally in Anchorage.

“Really? Really? So, when your house has been invaded or your daughter has been raped, or your business has been broken into, or your vehicle has been stolen, you think a social worker will be able to take care of those issues? I doubt it very much,” he said. “We’ve just lost track of common sense. That’s what bothers me more than anything.”

Anchorage resident Kim Amar showed up to express her gratitude and respect for those who help safeguard her freedoms.

“I have a couple of people who go to my church who are police officers and I just want them to know that I respect what they do,” she said. “They sacrifice themselves and potentially their lives, and they need to know that they are appreciated.”

As two-hour rally wound down, Anchorage Deputy Chief of Police Ken McCoy emerged from the police station followed by 33 uniformed officers who greeted the well-wishers. Wearing masks, they bumped elbows and thanked people for their support.

“Thank you. It really means a lot,” McCoy said as he walked past the cheering crowd. “This means everything.”