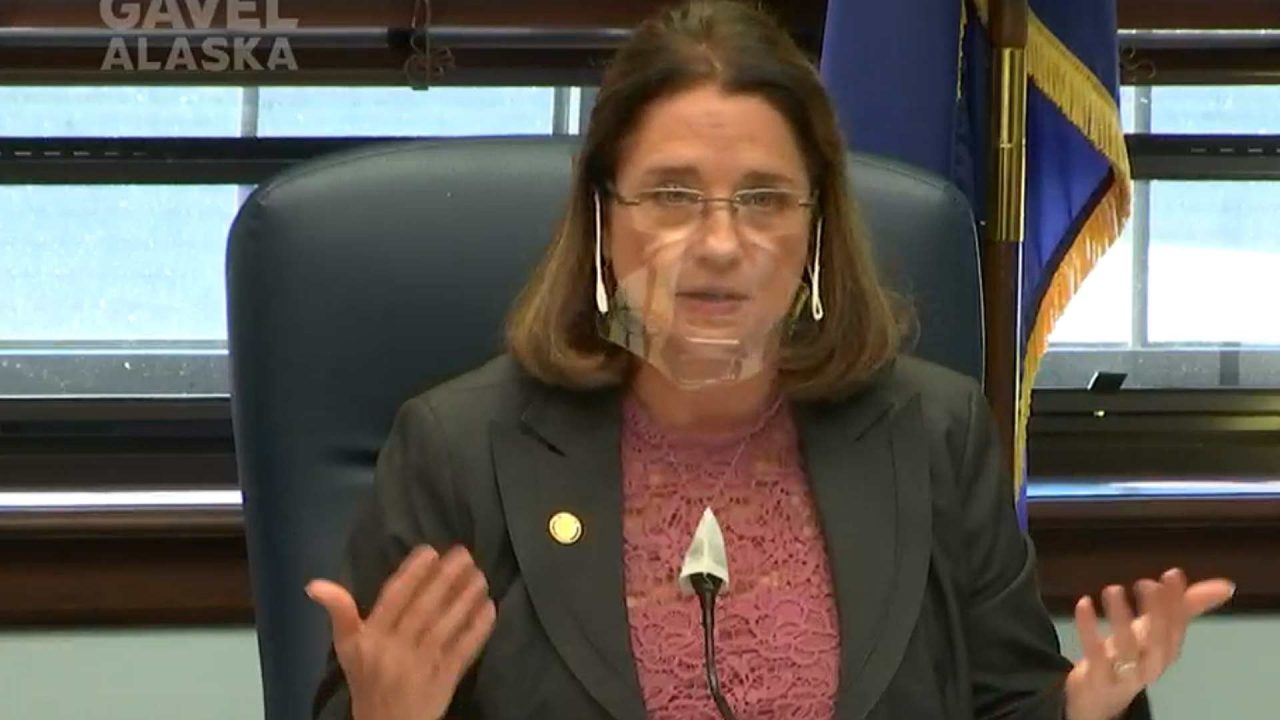 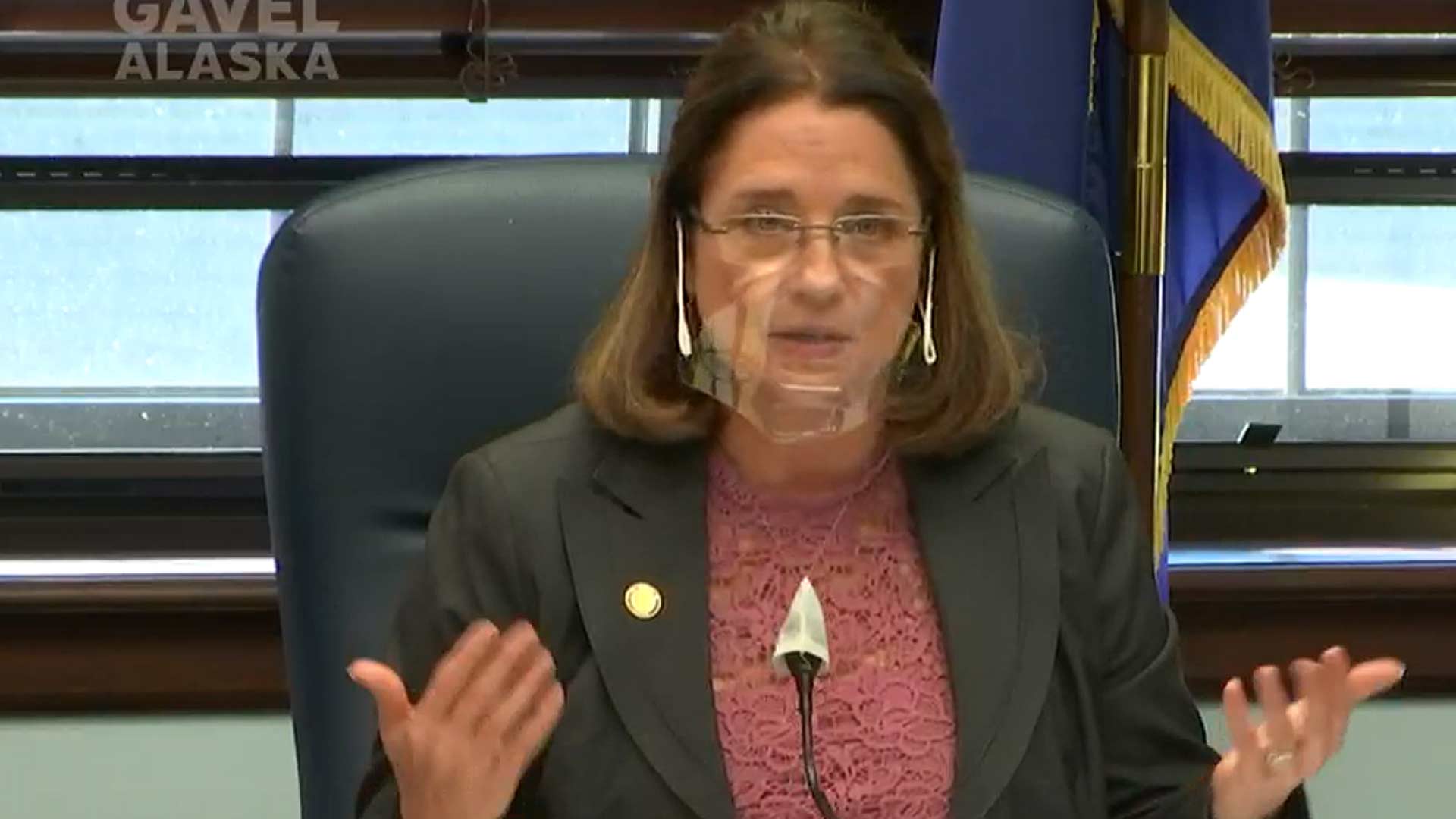 The work of the Alaska Senate is being hamstrung by the leadership’s insistence that all members wear a particular type of face covering during the session.

At the center of the controversy is Sen. Lora Reinbold (R-Eagle River) who has worn a clear face shield for seven weeks, a covering which many senators object to as not being safe enough.

Reinbold entered the House Health & Social Services Committee on March 9, which lead to Rep. Zack Fields (D-Anchorage) to request that she be required to wear a face mask that complies with controversial rules the Legislature has adopted for the current session. Reinbold refused a mask and was ultimately escorted from the room by security.

On March 10, controversy broke out again at the start of the Senate’s morning floor session. It began, as usual, with the opening prayer and pledge of allegiance. Video coverage shows Reinbold in attendance wearing only her clear face shield. Following the pledge, Reinbold left the Senate Chambers.

After a brief at ease, in which Sen. Lyman Hoffman (D-Bethel) and Senate Majority Shelley Hughes (R-Palmer) spoke with Senate President Peter Micciche (R-Soldotna), Hughes removed her mask, which is permitted under the current rules, and then asked that Reinbold be excused from the call of the Senate.

This was approved without objection.

A few seconds later, Sen. Gary Stevens (R-Kodiak) rose without wearing a mask and made a motion that the Senate enforce its COVID mask policy “on all members on the Senate.” This enforcement includes the use of all Senate space and resources, he said.

“The reason for these policies – protect legislators and staff. All 59 legislators and all staff have complied. Only one is not wearing an approved mask,” he said. “This is a concern to all of us. Staff has expressed fear. Others have talked of early retirement.”

Stevens said Reinbold’s “misbehavior” has taken up valuable time in the Legislature.

“We have reached the point where it must be dealt with,” he said, adding that “Out of respect for our fellow senator we have all spent inordinate amounts of time – many of us trying to reason, making accommodations, trying to provide appropriate CDC masks, and this has always been rejected in favor of a mask that is simply not approved.”

He accused Reinbold of not being properly tested for COVID before entering the Capitol building, a practice which she has resisted.

Stevens said that even if everyone in the building was vaccinated, “we are still a long way off from complete freedom.”

“I suspect that we will need to take great care right up to the last day of this session,” he continued. “There are still dangers out there.”

He noted that “this is a difficult motion for me to make,” and one that he has never in his 21 years in the legislature he has never seen before.

“Through this motion we are allowing the Senate to exclude a senator from this building, an extraordinary action Mr. President – unprecedented but necessary,” he said.

Stevens said Reinbold could return at any time if she agreed to wear an approved mask, test twice weekly and get her temperature taken upon each time entering the building.

The motion stated: “Allow Senate Leadership to enforce legislative council policies in all Senate and common Capitol spaces.” Eighteen senators voted in favor with only Sen. Mike Shower (R-Wasilla) opposed. Reinbold was excused from the vote.

Later in the day Reinbold attempted to hold a meeting of the Senate Judiciary Committee, which she chairs.

“I went to Chair Judiciary Committee, with work ready to go and a quorum to conduct business,” Reinbold said on her senate Facebook page. “Unbelievably, Sen Micciche wouldn’t allow the recording secretary or moderator to participate and said Judiciary was cancelled. He then said it was an unsafe work environment. I asked him to describe what was unsafe and he walked out. Is that leadership?”

In a separate post, Reinbold stated that she is “under intense pressure by Senate leadership to follow controversial and arbitrary Legislative Council rules.” She said she does not like anyone being forced to disclose health issues or test results, which she says are protected by HIPPA.

“However, I am wearing a face shield, as I have been for the past seven weeks, even though it is awkward and seems unnecessary,” Reinbold wrote. “I did take another Covid 19 test this weekend, under pressure, and again, I found out this morning it was negative. I have conveyed this, begrudgingly, to leadership. Unfortunately, they may choose to take unnecessary action today. Please note, my stance for protecting personal health information and directing my own health care decisions, in such a public fashion, is very difficult. My actions are to protect my constitutional rights, including civil liberties and those who I represent, even under immense pressure and public scrutiny.”

It is unclear exactly how Micciche will deal with Reinbold moving forward. In addition to chairing the powerful Judiciary Committee, she is also vice chair of both the Senate Legislative Council and State Affairs committees, and she is a member of the Senate Joint Armed Services Committee, the Legislative Budget & Audit Committee and the Health & Social Services Committee. Additionally, she sits on four subcommittees.