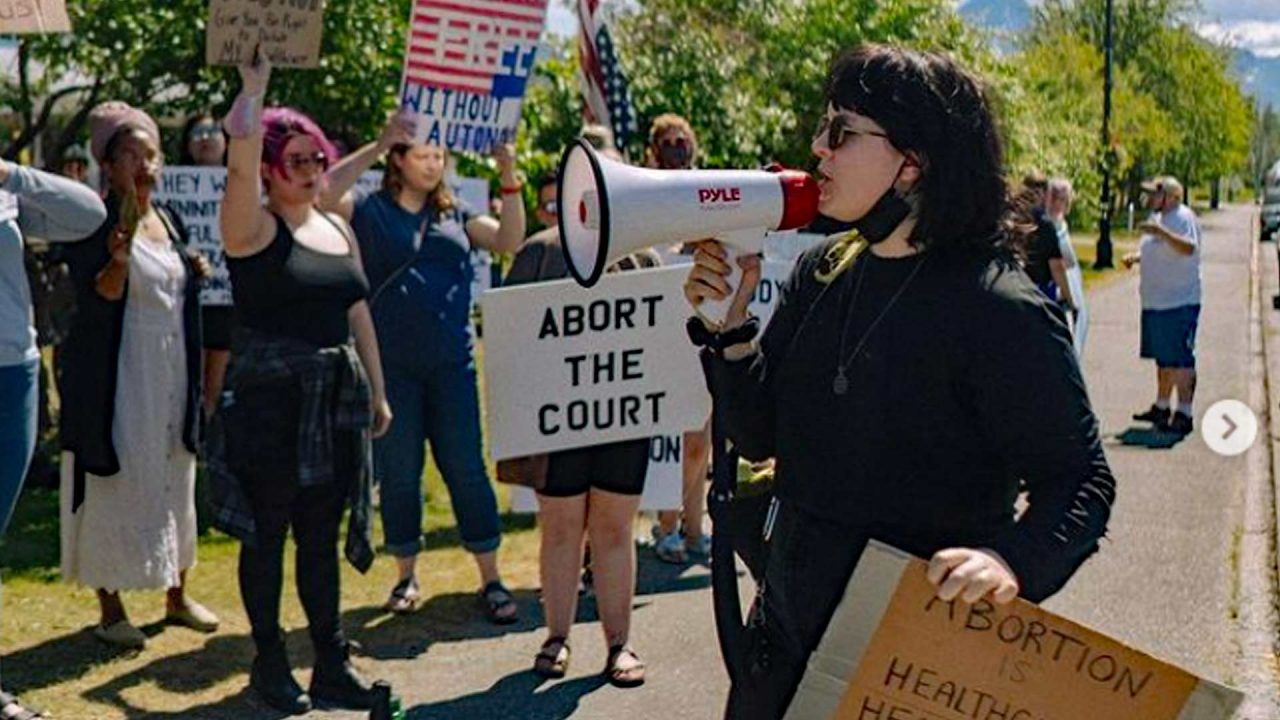 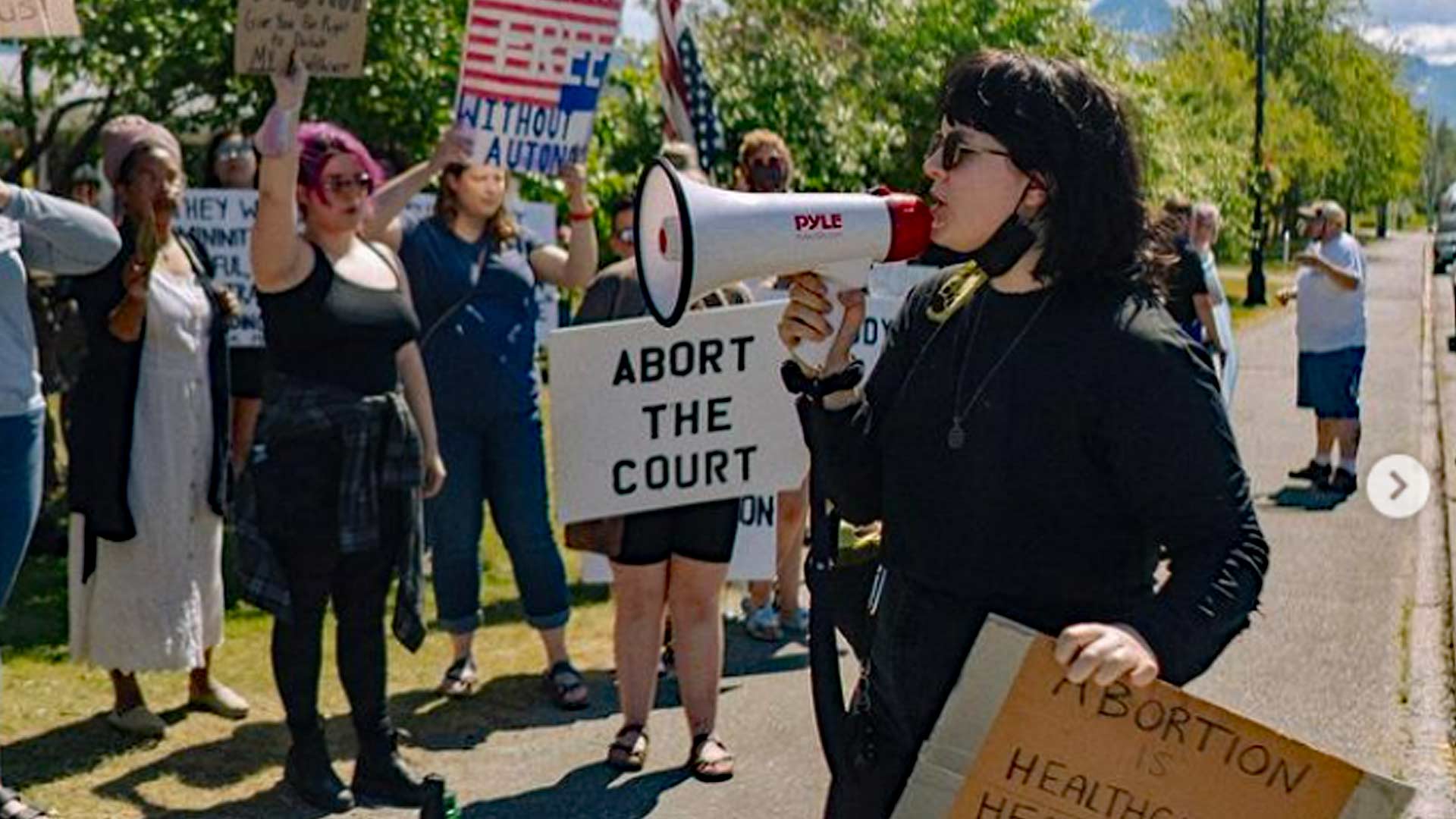 A group of about 50 pro-abortion activists gathered in downtown Palmer to scream anti-American and anti-Supreme Court slogans for a couple of hours on July 2. Protesters, including transgender and LGBTQ activists, voiced outrage at the U.S. Supreme Court’s decision to overturn Roe v. Wade last month, which let each state decide the abortion question.

One of the main organizers, Mikayla Bell, posted to Instagram that the high court’s decision means “most of the United States will ban abortions and women, non-binary, gender fluid, trans men, and others with a uterus, will lose their reproduction rights, and their choice to medically terminate a  unwanted pregnancy.”

Anti-Supreme Court, anti-American and anti-Christian sentiment was prominent throughout the protest with attendees screaming “abort the court,” “Keep your theology out of my biology,” and “Not the church, not the state, people must decide their fate.” The activists also held signs that read: “Abort the government,” “The U.S. doesn’t deserve a birthday party this year,” and “To hell with theocracy.”

A local citizen journalist, who posts videos under the name “Politadick,” was on hand to livestream the entire protest. Attendees called him “an extreme terrorist,” and at several points blocked his camera with signs and yelled at him for being in attendance. In one instance, a bicycler bumped into him to get him to leave the scene.

About half-way through the rally, Mikayla Bell led a group of pro-abortionists across the street to confront a small handful of pro-life advocates who were holding pro-life signs, singing Christian hymns and engaging protesters in conversation.

Pro-abortionists approached the pro-lifers, screamed at them and claimed that killing unborn babies was necessary because many would just end up on adoption lists, in foster care or living in poverty. One activist asserted that abortions serve to save the lives of women who might otherwise commit suicide if they gave birth to their unborn baby.

During the confrontation, a local business owner asked the pro-abortionists to move away from her storefront, saying they did not have a permit to block traffic by protesting in front of her business.

A Palmer police officer stopped by the rally to tell attendees that they needed to stay out of the street.

Democratic U.S. Senate Candidate Pat Chesbro, who has made abortion advocacy a major plank in her campaign, used the opportunity to stump for her political campaign. Taking a bull horn, she attempted to tie Independence Day to abortion rights.

“As we celebrate our Independence, I’m wondering who we are giving our independence to,” she told a cheering crowd. “I’m wondering if we should change our pledge to, ‘we wish we had liberty and justice for all,’ because last week the Supreme Court destroyed the liberties of many, many millions of people, and we don’t know what’s next.”

Chesbro went on to deride the Mat-Su School Board’s recent decision to prohibit biological males from competing in girls’ sports, and then blasted the Mat-Su Borough for rescinding a restrictive ordinance on gun ranges.

After criticizing Sen. Lisa Murkowski for voting to confirm some of the Supreme Court justices who voted to overturn Roe, Chesbro then encouraged attendees to take a page from the Ukrainians and fight for their rights.

“I wonder if we are as strong as the Ukrainians in fighting the people who want to take over our country and make it an autocracy, make it a fascist country?” she said. “Are we that strong? If so, we have to vote … and we have to mobilize.”

One woman grabbed the megaphone to urge “white cis gendered men and women” to “use their white privilege” to aide blacks and indigenous people in protecting the ability to kill their unborn babies.

Another woman, dressed all in black, praised the USSR for being one of the first nations to legalize abortion. Her announcement drew cheers.

The following day, Alaska Right to Life organized a small gathering in the same location to pray for the future of Palmer.