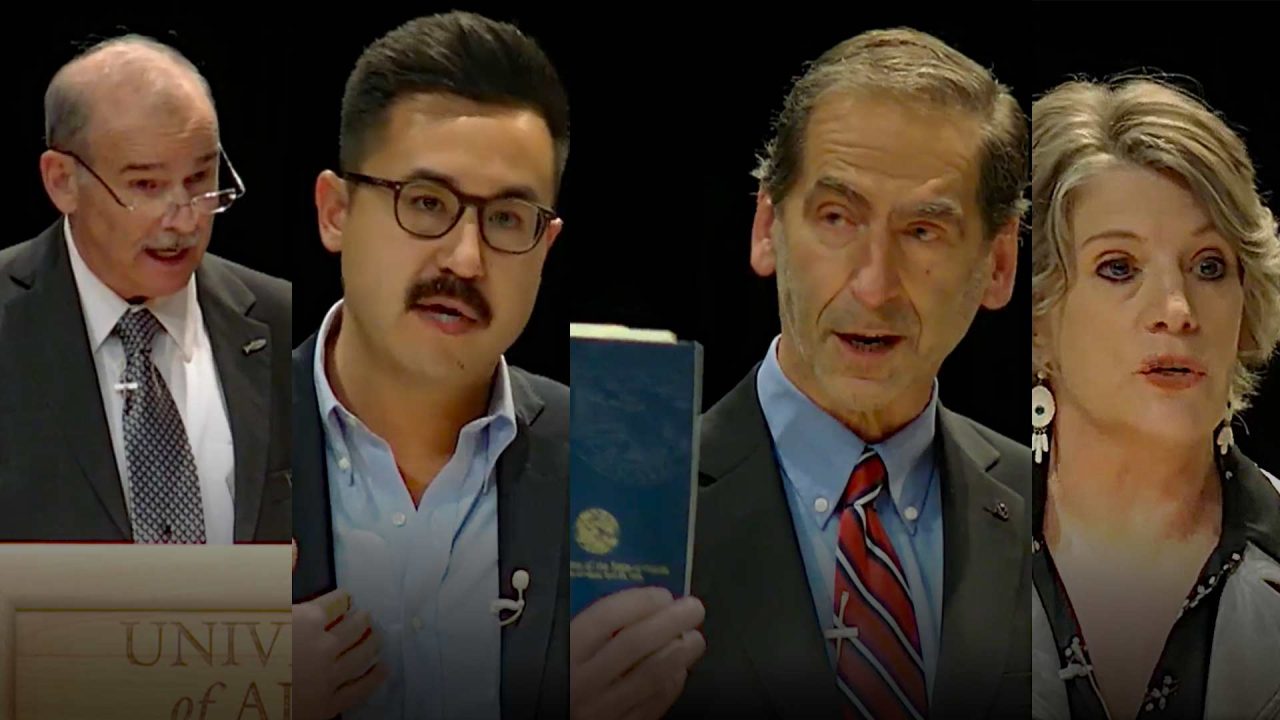 Debate on Alaska Constitutional Convention centers on risk vs. reward 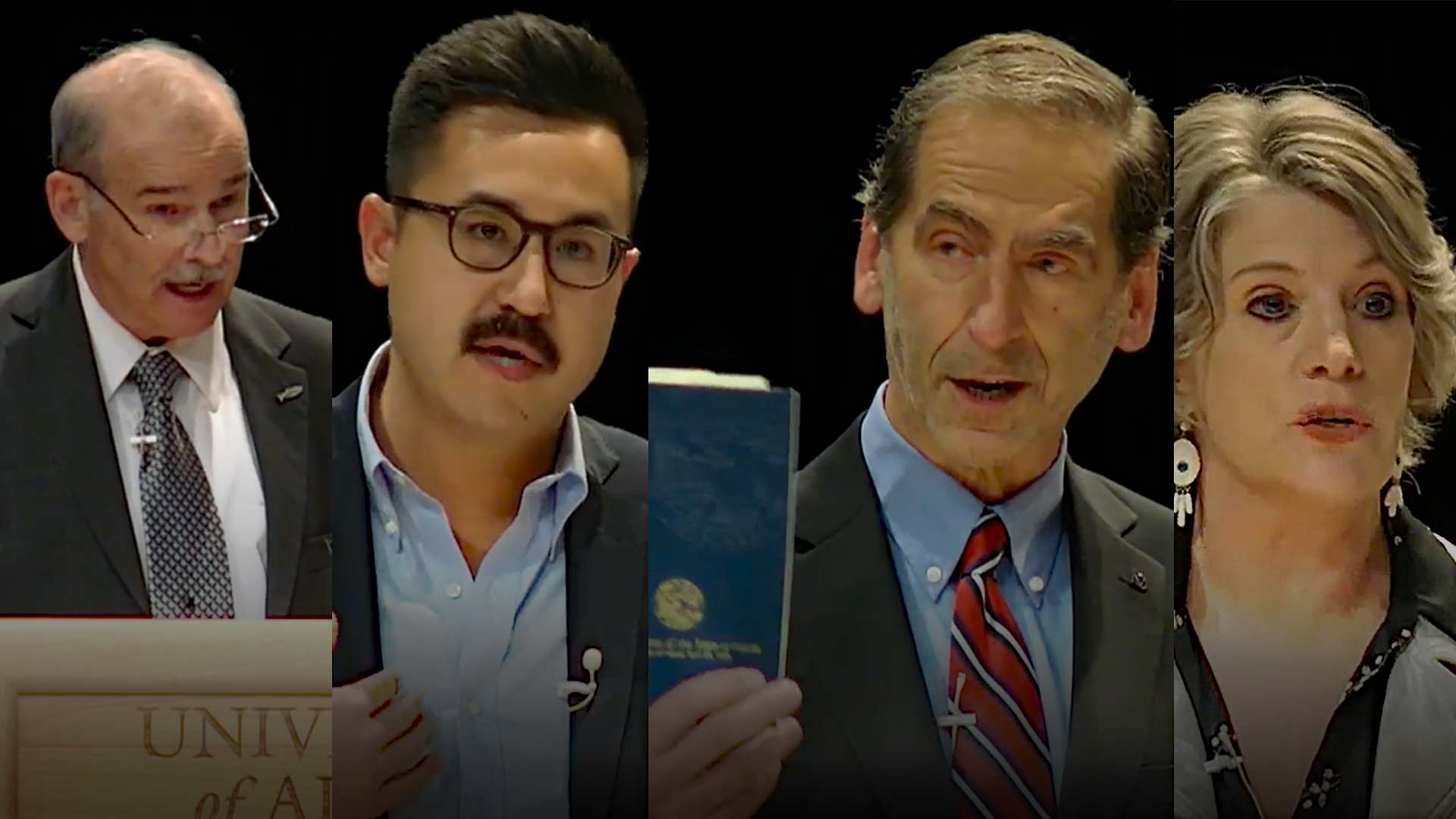 Roughly 100 people turned out for the Sept. 29 debate over whether Alaskans should vote on Nov. 8 to call for a state-level constitutional convention, a question which Alaskans are asked every 10 years in accord with the state’s constitution.

Bird kicked things off at the UAA Wendy Williamson Theater by arguing that those opposed to a constitutional convention are attempting to scare rank-and-file Alaskans with a campaign funded by dark money. He said they simply don’t trust voters to correct and hold accountable lawmakers, judges and the executive branch which have abused their power by usurping their legal roles.

Bird noted that the State Legislature has violated its own statutes regarding payment of a full PFD, the courts have violated constitutional laws by unlawfully seizing and defining the right to privacy and by taking away line-item veto powers from the governor. He also noted that run-away courts have refused to let grand juries investigate potential crimes by government officials, and have usurped state laws when it comes to election proceedings.

Joelle Hall, the co-chair of the anti-constitutional convention group – Alaskans Defending Our Constitution – argued throughout the night that a convention is “unnecessary, expensive and dangerous.” She repeatedly said it would foster “unpredictability” with regard hot-button issues like access to natural resources, taxation, abortion access, gender and sexual orientation laws, the PFD, wildlife management, judge selection and whether the state should expand school choice by allowing state spending on private schools.

Hall said Alaskans already have a way to address constitutional changes through the amendment process directed by the Legislature, and that there was no need to open “pandora’s box” by calling a convention.

Hall also emphasized that the process of electing delegates to a convention was uncertain and unpredictable, as those determinations ultimately reside with the Legislature.

Lehman countered with the fact that he trusts Alaskans to make wise and prudent decisions, and said it was past time to revisit some sections of the constitution, especially the process by which Alaska appoints judges. He said the seven-member Alaska Judicial Council has far too much power to nix good judicial candidates from serving as judges.

Shuckerow worried that a constitutional convention might entail the elimination of Alaska’s’ borough systems and the establishment of county sheriffs.

Shuckerow mostly focused on the fact that a convention was too “risky,” citing financial uncertainty in the business climate and the fact that we don’t know the process and rules by which the Legislature would establish how a convention would proceed.

Bird acknowledged that a convention is somewhat unpredictable, but so is daily life in general. That said, he observed that there is a multi-prong and lengthy process to ensure that any changes would be ultimately approved by Alaskans through a popular vote. Bird added that Alaskans deserve a chance to protect their PFD, revisit how judges are selected and address the issues of privacy, which the courts have interpreted to include a right to abortion.

“Who do you want to determine personhood?” Bird said. “Unelected judges or your friends and neighbors, or their elected representatives in the Legislature?”

Shuckerow, countered, saying a constitutional convention might entail the elimination of Alaska’s’ borough systems and establish county sheriffs. He also worried that a convention might result in other changes – currently unknown.

Lehman returned to the fact that he trusts Alaskan voters, and said a constitutional convention is the best way to let them decide critical issues which the Legislature has failed to address.

Bob Bird said Alaskans deserve a shot at addressing problematic concerns which the Legislature seems unwilling or able to tackle.

Hall returned to her concern over how delegates might be selected. She said it could be that the rules favor those with established name recognition and deep pockets.

Bird agreed that the process of selecting delegates should not give current legislators or those with sizable finances or name recognition a leg up on rank-and-file Alaskans.

Both Bird and Lehman maintained that the constitution does not need an overhaul, but does need to be tweaked to address changes since it was first established in the 1950’s. Bird called for a “facelift.”

When asked whether they believed a convention would adequately represent the interests of minority groups, Hall worried that women might not be properly represented.

“We don’t fear the Alaska voter who will be asked to approve the amendments.”

Lehman retorted that the current Legislature enjoys wide representation, across multiple regions, and doesn’t see why that wouldn’t be the case at a convention.

As to the issue of uncertainty – which was the main argument from the convention “no” side, Bird said the tactic of “feeding a fear” of the unknown was uncalled for. He said Alaskans have multiple opportunities to address how the convention works, how delegates are selected, what issues they address and whether those issues are acceptable to the majority of voters.

In the end, Lehman put his trust in Alaskans to make the right call.

“We don’t fear the Alaska voter,” he said.