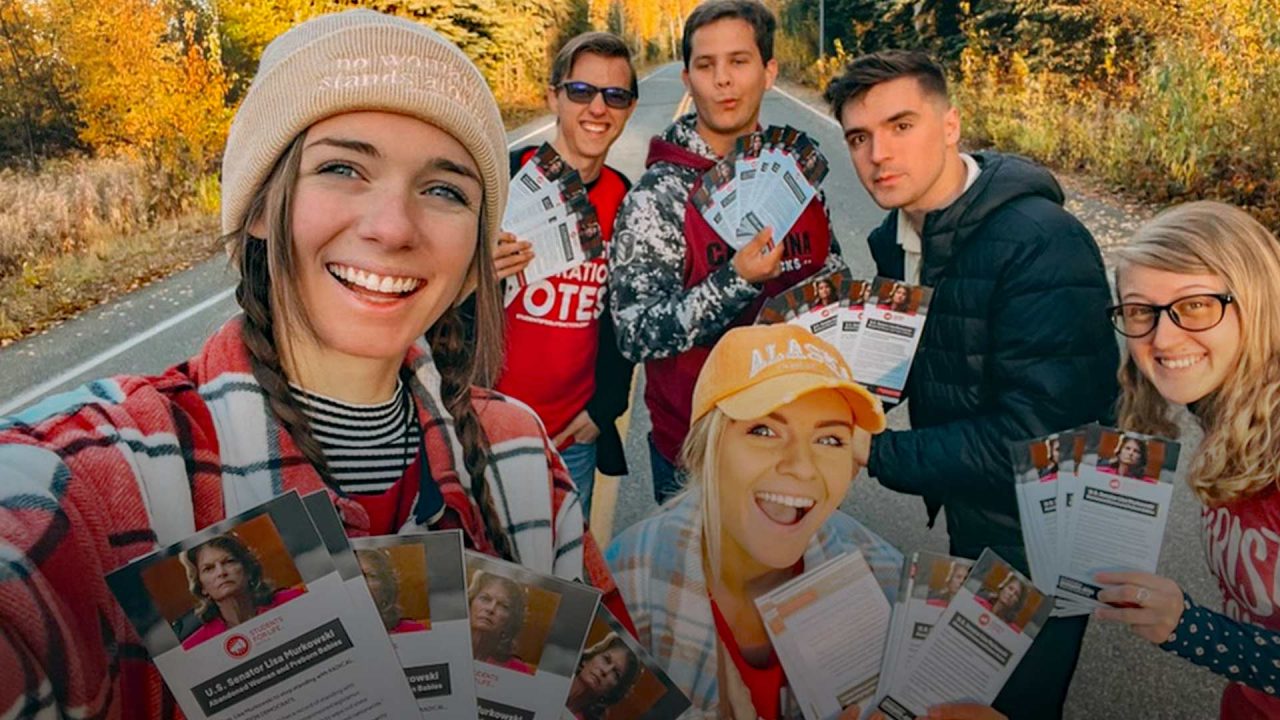 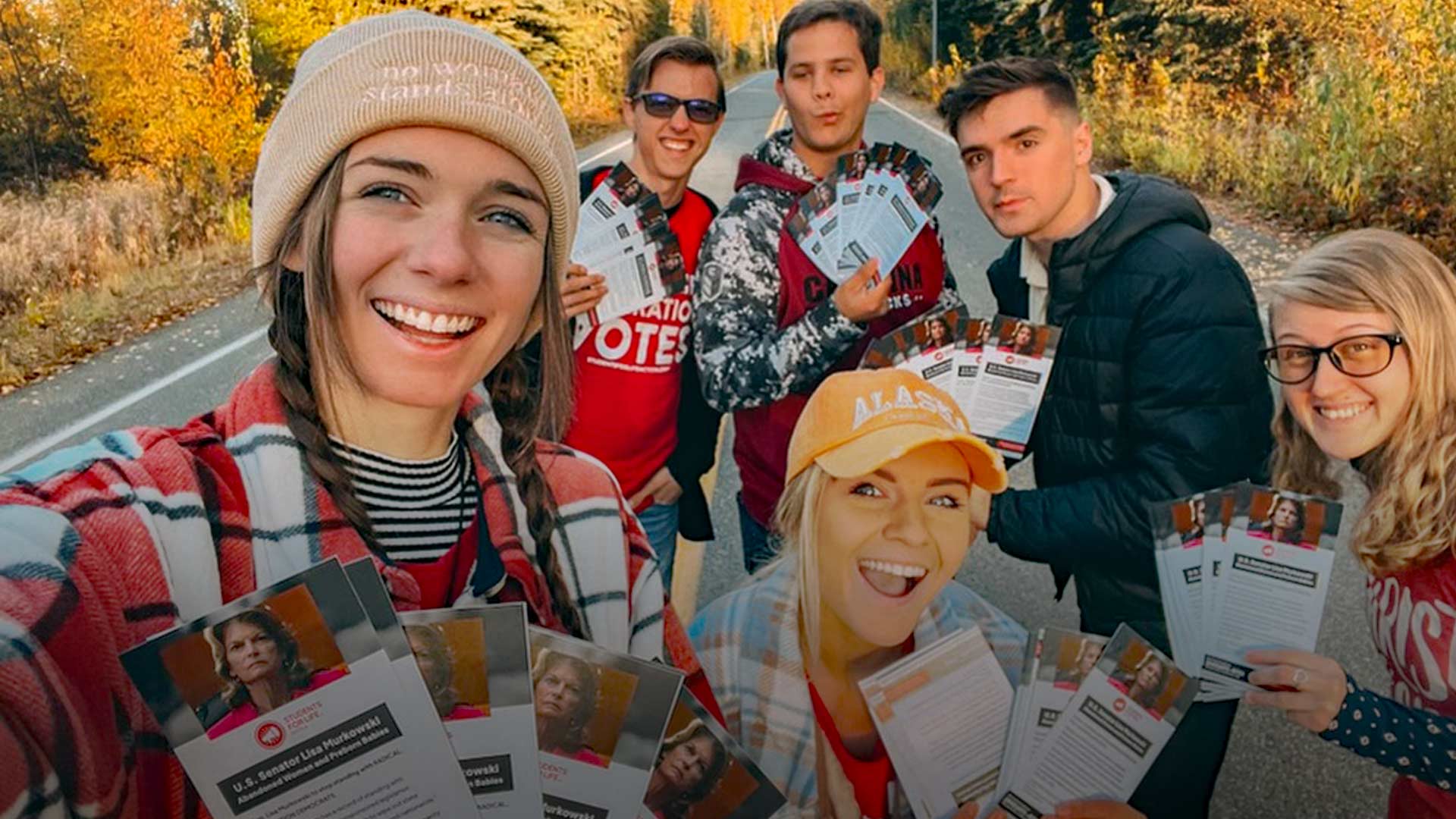 By LAUREN MARLOWE – (Students for Life)

There’s nothing pro-life about Senator Lisa Murkowski’s (R-AK) voting record as noted by the Pro-Life Generation during a recent activism trip last month. Murkowski is running for re–election to the U.S. Senate, but she has an extreme record of standing with the radical, pro-abortion party.

She co-sponsored legislation going beyond codifying Roe v. Wade to wipe out state pro-life laws and create abortion-on-demand nationwide. Murkowski also voted against protecting life at 20-weeks (when babies can feel pain) and in favor of giving tax dollars to Planned Parenthood.

When Students for Life Action (SFLAction) arrived in Fairbanks, Alaska to begin our activism trip, we scouted out the area, and the first thing we noticed was the overabundance of political signs, banners, and billboards. I had never seen so many political advertisements in my life. It seemed like every single house had at least 3-5 signs supporting every candidate they planned to vote for.

Because of this, we assumed that this city would be very politically charged and would greet us harshly, but it was the opposite reaction. When we began door knocking, we were all shocked by how lax and under-informed everyone was about the election and abortion in general.

The majority of community members that we spoke with were horrified to hear about Murkowski’s abortion extremism. It was astounding how many people were accidentally planning on voting for a pro-abortion Republican; one that would be in office for another six years if elected. (Yikes!)

From Murkowski’s history of co-sponsoring legislation that would wipe out all pro-life laws nationwide to her record of supporting Planned Parenthood and voting against protecting babies in the womb at 20-weeks, the Alaskans we spoke with were outraged upon realizing that a pro-abortion candidate almost had their vote.

If we learned anything from this trip, it’d be this: Most people DON’T want to vote for pro-abortion extremists. And there’s nothing more exciting than educating them and empowering them to be confident in their life-affirming voting options. Many Alaskans decided that Murkowski’s record on abortion is #TooExtreme4Me.

Another student volunteer, named Jeremiah from Arizona, even ran into Murkowski’s brother-in-law. Unintimidated, Jeremiah pressed on into the conversation…

That wasn’t the case with everyone, of course.

The former president of the Students for Life of America (SFLA) group at the University of Fairbanks and a local pro-life advocate were knocking on doors early Saturday morning when an angry, middle-aged man confronted him. This man spoke and laughed about how he believed that we should be able to kill babies and toddlers for years after birth.

Another student volunteer, named Jeremiah from Arizona, even ran into Murkowski’s brother-in-law. Unintimidated, Jeremiah pressed on into the conversation, and when the brother-in-law realized that we were a pro-life group, he quickly said, “If this is anything against Lisa, I don’t want to hear it.” He then shut down the conversation and refused to continue. That’s the abortion lobby for you.

While in town, we were also able to connect with multiple churches, school leaders, and students that were eager to start new SFLA chapters! We spent one evening with a local student who was in the process of starting a group at her university, and we even knocked on the door of a local school principal whose school is now going to be hosting one of our activism trainings this fall semester.

Colin Shaw, South Carolina SFLAction State Captain, said, “When we go door-to-door, and we talk to people who are unsure of their stance on abortion, they learn a lot, and it’s amazing to see the changes that you can make in somebody’s mind who is completely oblivious to what the atrocities of abortion are! It’s amazing the kind of impact that high school and college kids can have in their community, state, and nation. I love these deployments and I can’t wait to go on my next one.”

Another local volunteer Daniel Doughtery added, “I thought the door knocking campaign was a huge encouragement to many life-loving conservatives in Fairbanks. So many people responded with such gratitude for what we were doing. I also met a lot of pro-life people who didn’t know about Murkowski’s pro-abortion stance and changed their voting plans.”

Overall, SFLAction’s deployment trip to Fairbanks, Alaska was a huge success. We knocked on the doors of thousands of homes, and in educating the community, we also strengthened our own students in their pro-life activism. In the evenings, when it was too late to knock on people’s doors, we also took our students to the Aurora Ice Museum and to visit Denali National Park. It was an activism trip none of us will soon forget!