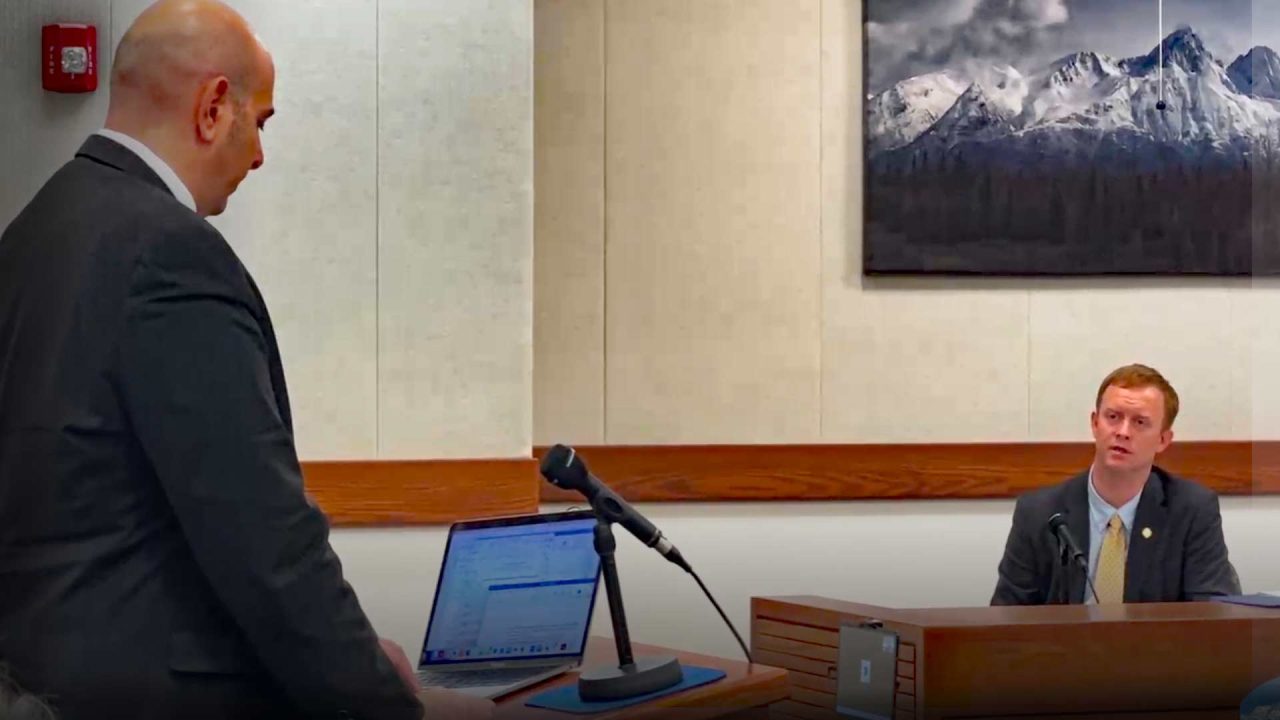 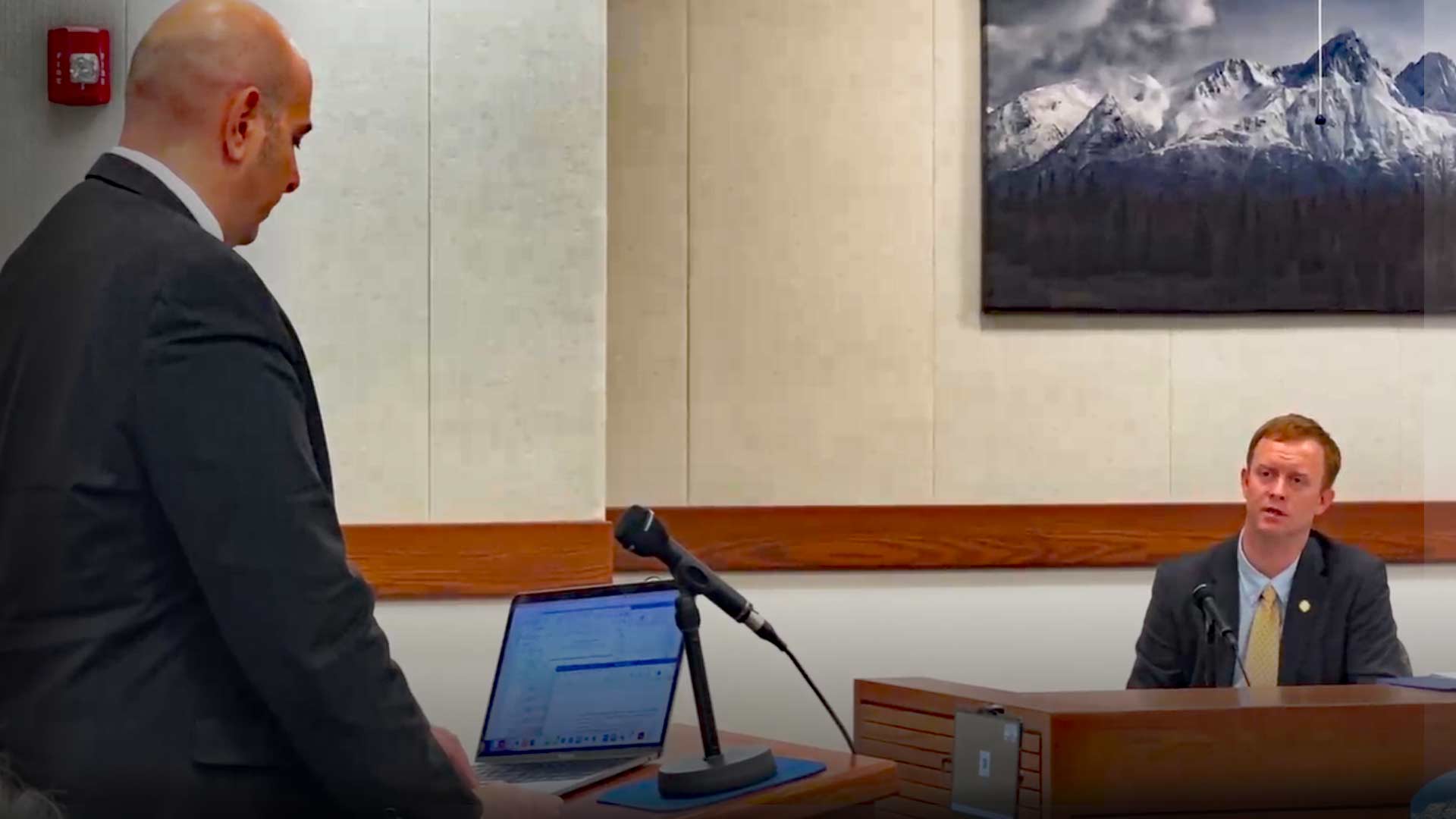 Amid frequent bandwidth complications, audio interruptions and frozen video feeds, Alaska State Rep. David Eastman (R-Wasilla) took to the virtual stand – via Zoom – on Thursday in a lawsuit challenging his eligibility to serve in public office due to his association with the national Oath Keepers organization.

Due to a massive winter storm, hazardous road conditions and the closure of the Palmer Courthouse, Eastman was forced to answer questions under oath using remote digital conferencing with frequent bandwidth issues. This was Eastman’s second day on the stand, and the fourth day of the bench trial.

The case against Eastman, brought by former Mat-Su Assembly member Randall Kowalke, centers on the question of whether Eastman should be disqualified from serving in the Alaska Legislature based off the State Constitution’s disloyalty clause, which bars individuals from public office if they are members of an organization that seeks the violent overthrow of the government.

Last month, Eastman easily won reelection to the State Legislature for his fourth consecutive term. Anchorage Superior Court Judge Jack McKenna has, however, ordered the State Division of Elections to delay certifying his victory until after the trial.

Eastman said he supported a temporary delay in certifying the 2020 elections in order to allow members of Congress to legally and lawfully file challenges to the election, but he did not support the attacks perpetrated on Jan. 6.

Goriune Dudukgian, the attorney for plaintiff Kowalke, summoned Eastman to give an account of his view of the events that unfolded on Jan. 6, 2021, at the U.S. Capitol Building.

Dudukgian’s line of questioning attempted to paint Eastman as a supporter of those who perpetrated violence at the U.S. Capital. While Eastman repeatedly said he opposes anyone who participated in acts of violence on Jan. 6., he did not outright condemn the entire Oath Keepers organization by name. Rather, he emphasize that anyone who broke the law should be “prosecuted to the fullest extent of the law.” He added that this should also apply to any individuals members of the larger Oath Keepers group who might have committed such crimes.

To date, 33 members of the 38,000-strong organization have been charged with crimes associated with Jan. 6. Last month, Oath Keepers’ founder, Elmer Stewart Rhodes III, was convicted of seditious conspiracy in connection with Jan. 6 events, as was Kelly Meggs, the leader of the Oath Keepers’ Florida chapter. Three other members were found guilty of lesser felony charges.

Eastman has been listed as a “lifetime member” of Oath Keepers since donating $50 to the group back in 2014. Prior to that, he had given two $30 donations, in 2011 and 2010. He has acknowledged that he receives occasional emails from the national organization, but has not attended rallies or conferences organized by the loosely connected organization.

Dudukgian attempted to argue that in as much as Eastman is a member of Oath Keepers, he supports an organization that attempted to violently overthrow the government. Dudukgian claimed it is impossible to separate Rhodes – or his actions – from the organization he founded.

During his testimony, Eastman noted that he was present for President Donald Trump’s speech near the White House on Jan. 6, and later gathered with friends for a photo near a memorial about a quarter mile away from the Capitol building. He explained that he never went to the Capitol itself, nor did he participate in any attempts to enter the building.

Eastman testified that he had supported a temporary delay in certifying the 2020 election in order to allow members of Congress to legally and lawfully file challenges to the election, but he did not support any of the violent attacks perpetrated on Jan. 6.

The plaintiff’s case against Eastman hinges on the ability to show that Eastman is a member of Oath Keepers, that the official organization (not just some individuals with in it) advocates for the violent overthrow of the government, and that this is a violation of Alaska’s disloyalty clause. Presiding Judge Jack McKenna has also asked both the plaintiff and defense to give him their opinions on whether there are any parts of the U.S. or Alaska constitutions which would challenge the constitutionality of Alaska’s disloyalty clause.

The case is expected to extend into next week as the defense calls numerous witnesses to the stand, including Oath Keepers founder Rhodes.

In pretrial hearings, Eastman’s attorney Joe Miller has argued that the Oath Keepers – as an organization – does not advocated for the violent overthrow of the government, nor has Eastman.