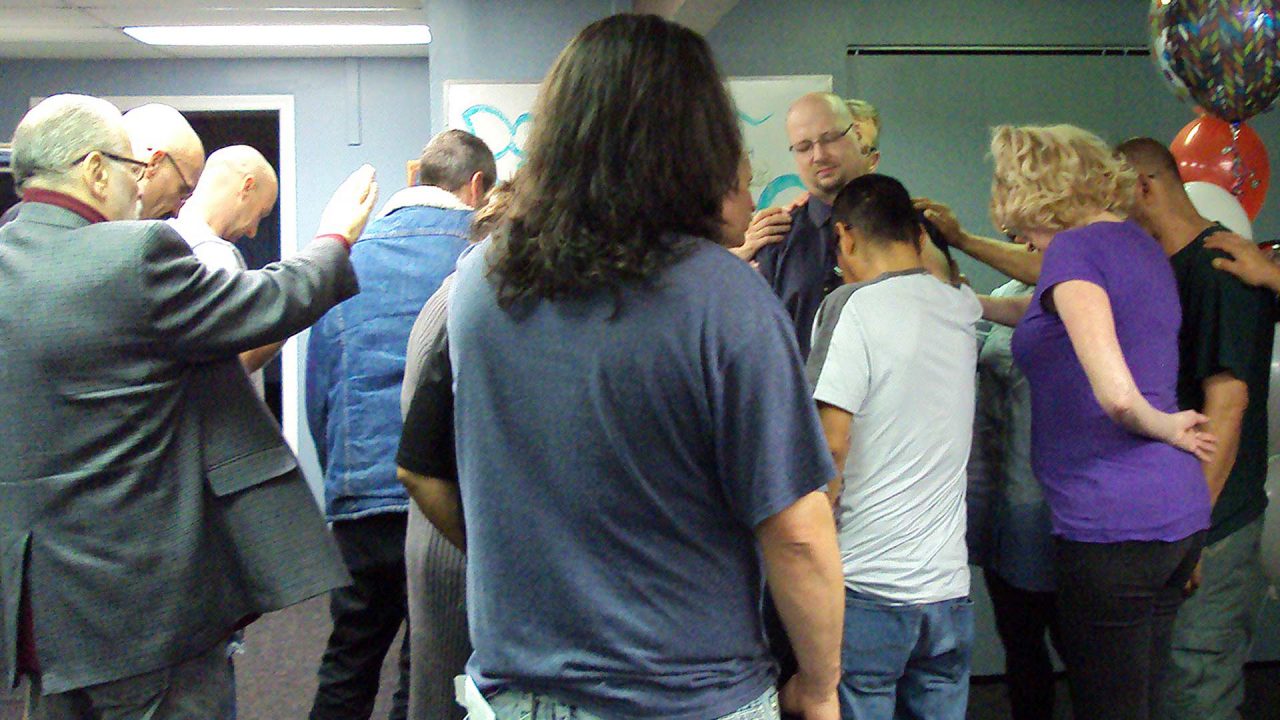 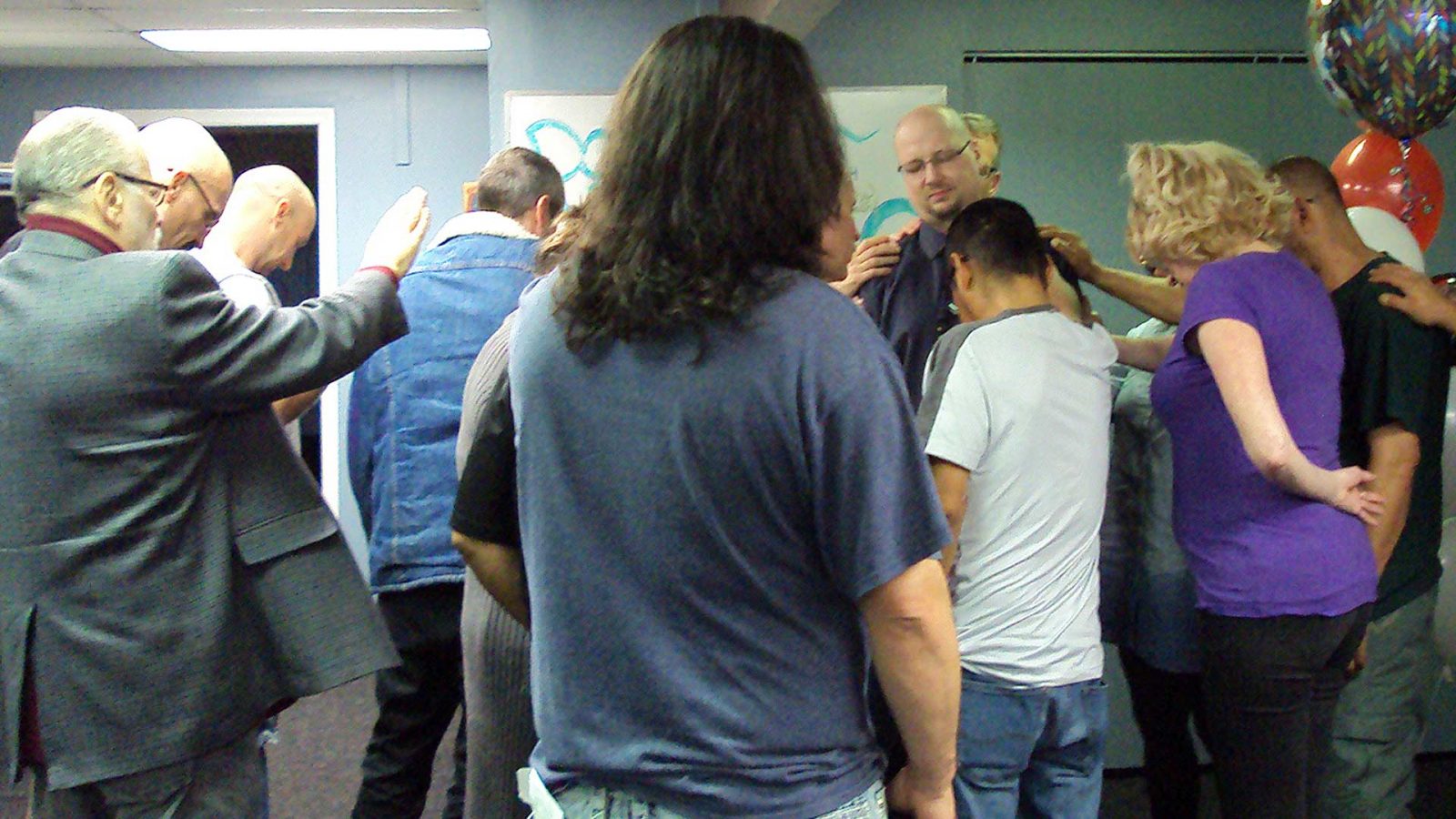 It was September, dark enough already for the northern lights to illuminate the tent where Daniel Bates was living in the margins of Fairbanks. The weather was bleak, his life was bleak, and no amount of alcohol was numbing the bitterness of either.

“Drinking had taken over my life. I was pretty fed up with where I was at,” he said. “I was in the tent, cold. It was kind of an epiphany; I was like, ‘This is not the life God intended for me.’”

As a cook he had burned too many bridges in Fairbanks restaurants. Each time he tried to get sober and get his life back in order, he would land a new job and soon thereafter relapse, get drunk and get fired.

“I was not raised to live like that. I was always trying to get a job and get better,” he said. “I just couldn’t keep the bottle out of my mouth.”

Bates had heard some moving testimonies about the Anchorage Gospel Rescue Mission shelter and decided then to leave Fairbanks and the wreckage of his past behind to seek out the Rescue Mission. He crawled out of his tent and walked out of the woods.

“I left the sleeping bag and tent right where it was, in hopes I’d never return,” he said.

The Anchorage Gospel Rescue Mission shelters up to 100 homeless individuals every night, meeting emergent needs like safe beds, showers, laundry, fresh clothes and as many as 9,000 meals per month. For some it’s a revolving door. Many fall among the working poor. For those like Bates who are desperate to transform, the Rescue Mission also provides longer term transitional housing, life skills and GED courses, addiction treatment referrals, sobriety support groups, limited medical care, mental health counseling and more.

“We would love to have their [state] money, but come on — we were the only two shelters in town not adversely affected by the governor’s decisions. We didn’t want the headache of it,” he said. “And we want to be free and clear of thinking about any of their restrictions.”

As such the Rescue Mission, as well as the privately funded Downtown Hope Center were unscathed by the state budget crisis that imperiled Alaska’s other homeless shelters this summer. When Gov. Mike Dunleavy vetoed $3.6 million from the Homeless Assistance Program, halving its budget, other shelter operators were forced to cut services. Even nonprofits like Clare House and Brother Francis Shelter were reeling from the loss of state matching grants. Though state funding eventually was restored, advocates were left re-evaluating dependence on the mercurial state budget to fund outreaches for the poor and vulnerable.

When LaMantia surveys the badly outdated kitchen, where cooks including Bates prepare an average of 7,500 meals per month, and the small dining room, where mealtimes must be staggered to accommodate up to 100 people, he acknowledges that millions of state dollars could cover upgrades and even expansion. But he and the trustees have concluded it’s not worth the risk, or the restrictions. Instead they rely wholly on corporate sponsors, donations from churches, volunteer time and services, support from foundations and partnerships with other community organizations.

“We would love to have their [state] money, but come on — we were the only two shelters in town not adversely affected by the governor’s decisions. We didn’t want the headache of it,” he said. “And we want to be free and clear of thinking about any of their restrictions.”

Particularly they reject any restrictions on the expression and practice of their Christian faith. The Rescue Mission is faith-based, with the motto, “A Meal, A Bed, A Soul Well Fed.”

‘A different life is possible’

“In our chapel there’s a sign that says, ‘Faith does not make things easy. It makes them possible,’” LaMantia said. “People come to us, and when you look into their face, you realize you’re not looking into faces with any hope. They believe they have reached their lot in life — that this is their fate, this is who they are and all they are designed to be. We want them to know a different life is possible.”

“I don’t care who you are or what you are or what your lifestyle has been, you are welcome in the front door of this mission. If you’re hungry and you need a place to sleep, we have a place for you,” he said. “Everything is free here. All we ask is that you sit for an hour and listen to the message of the Gospel.”

“We simply tell them what we know,” he added, “and they can receive it or reject it, their choice.”

‘I started changing pretty much the day I got here’

Even wasting away in that tent, Bates said his faith in Jesus from his Catholic upbringing was always important to him and largely the inspiration for him to seek a better life via the Rescue Mission.

Upon arrival he failed the mandatory breathalyzer test. The childhood friend who had driven him there from Fairbanks paid for a hotel room so he could sober up enough to enter. Inside the Rescue Mission, he said, he rededicated his life to Christ. On Sept. 20, almost exactly two years since he left his tent, Bates celebrated his graduation from the life skills program and two years of sobriety.

At his job in the shelter’s kitchen, he discovered a “newfound passion” for cooking in a position that is “more about serving others and not all about serving pretty food.” He’s renting a place on site, where his Rescue Mission friends and support network watch out for him and hold him accountable.

“It’s been nothing but a blessing. I knew [alcoholism] was a problem a long time ago, but I thought I knew how to fix it. You think you can just defeat it on your own,” Bates said. “Sometimes making that next right decision can be really tough. I had to change a lot of things I was doing. I started changing pretty much the day I got here.”

“We’ve done our part telling them [guests] the truth about Jesus,” LaMantia said. “I can’t take responsibility for how they act on it afterward, but they’re going back out there with a full stomach, a good night’s sleep and the Word in their heart.”