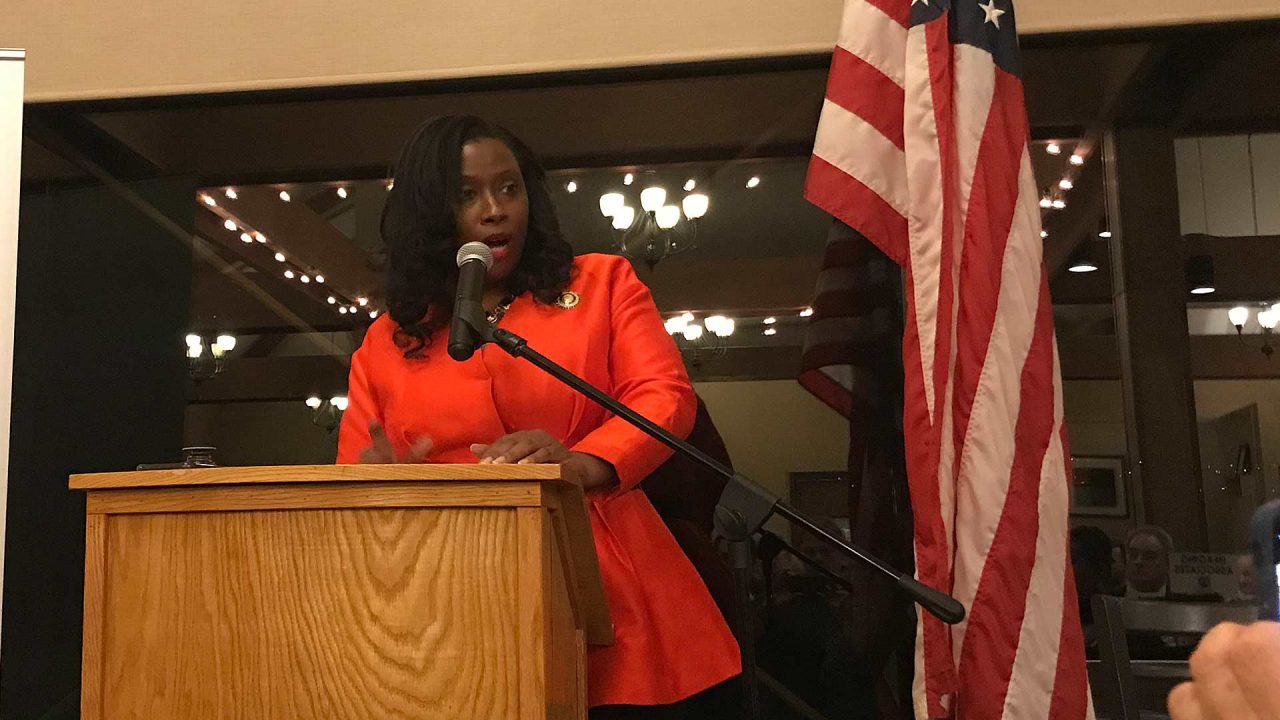 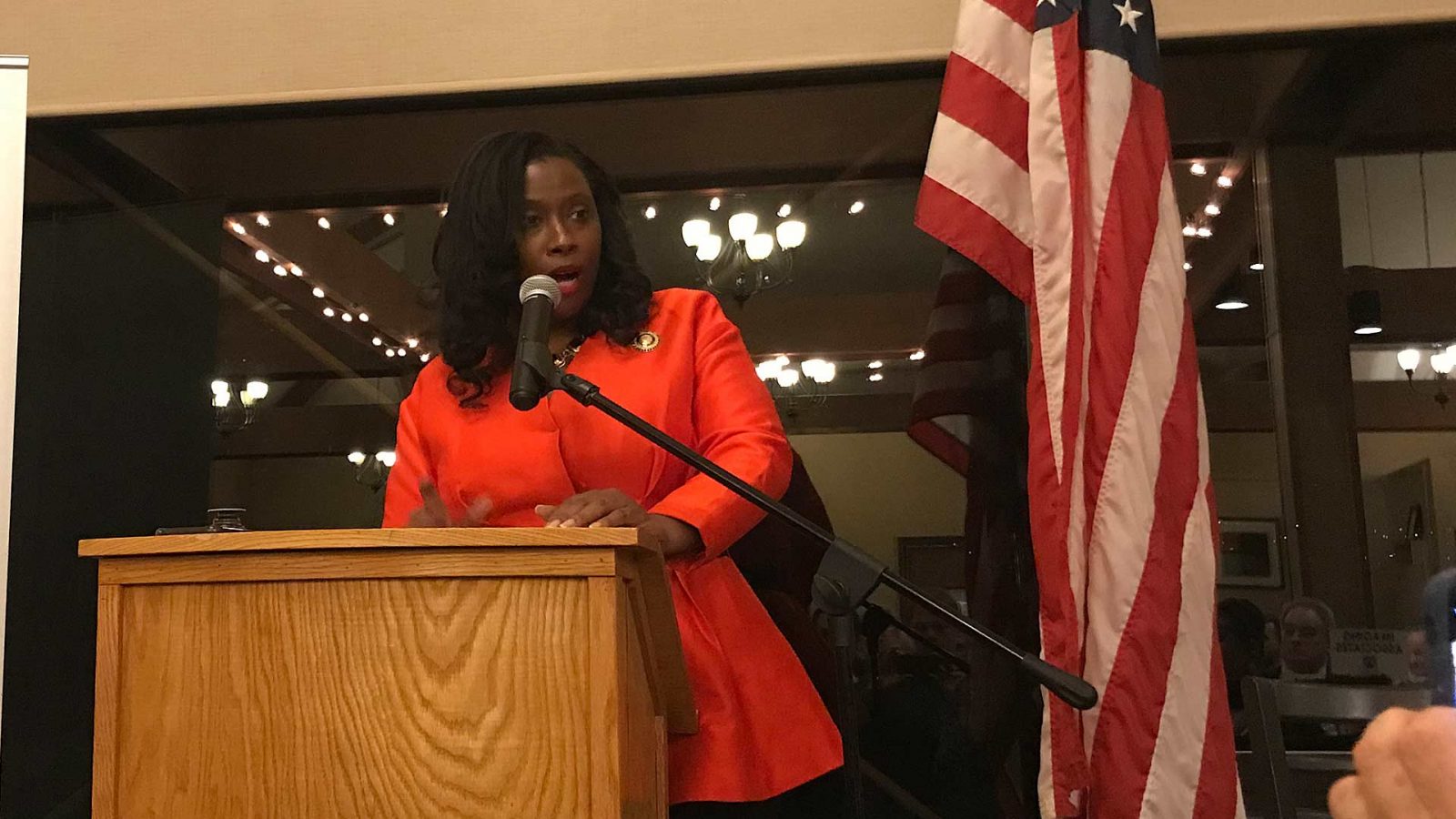 Katrina Jackson, a representative in the Louisiana State House, boldly proclaims that she is a black, Democrat and unapologetically pro-life.

She brought that message to Alaska last week during a fundraising event for the Alaska Family Council in Anchorage. Speaking to an audience that included Gov. Mike Dunleavy and many movers and shakers in the conservative and pro-life community, Jackson challenged Alaskans to think outside party lines when it comes to core issues like marriage, religious freedom and especially abortion.

“This is not a party issue – it’s really not,” she told a packed banquet room at O’Malley’s on the Green Restaurant, Oct. 26. “And I think we all contribute to making pro-choice lobbyists and advocates stronger by making it a party issue.”

Jackson pointed to Louisiana as a prime example of where party lines dissolve when legislators come to vote on pro-life issues, prayer in schools or upholding the definition of marriage as between one man and one woman.

“The bottom line is that when we vote for an abortion thing or a pro-life thing you cannot tell whether we are Democrat or Republican,” she said. “That’s what I love about Louisiana.”

“On the Christian issues, we approach the table as Christians,” Jackson added. “There is a cease fire in those moments, because we know we are one nation under God. We are one Louisiana under God. You have to become one Alaska, under God.”

Jackson recalled that Louisiana passed a 2014 law requiring abortion providers to obtain admitting privileges to a nearby hospital. They were the only exception among physicians who perform surgeries in the state. The law passed 88-3.

The law is part of a case the U.S. Supreme Court will hear during its current session – the first abortion related issue before the Court in three years.

“I was excited about that,” Jackson said. “This may be the chance where the Supreme Court begins to reverse 46 years of killing and shedding innocent blood.”

PARTY IS NOT PRIMARY

Jackson doesn’t gloss over the fact that party differences often result in strong disagreements regarding public policy, especially with regard to financial and economic issues, but on core “Christian issues” she said there should be agreement.

She urged Republicans and Democrats to talk to children about the primacy of faith above politics so that the younger generation can join whichever party without being pressured to abandon pro-life and pro-family values that honor God.

“One of the most irritating questions I get on Twitter is when someone says, ‘Why are you still a Democrat?’” Jackson said. “You know why? Because I’m a Christian first. America has become so twisted that party comes before Christianity.”

Speaking of children who have been lost to abortion, Jackson noted that the U.S. Supreme Court’s 1973 rulings to legalize abortion have stolen invaluable human contributions from society – people who may have found a cure to cancer or HIV, people who may have changed the course of history.

“Every day that this erroneous Supreme Court decision stands we never know, day-by-day, what we are killing in the womb,” she observed.

Jackson pointed out that when God was ready to answer the greatest problem that ever plagued the world, he did it through a mother’s womb.

“When God came to bring us the answer to our sin, to give us an everlasting life, to redeem us, he did it through the womb of a woman – of an unwed, teenage woman,” she said.

The fact that some of her fellow Democrats put the party line on abortion above their professed faith in God is deeply disturbing.

“I’ve served with ministers of the Gospel who believe because they are Democrat they can stand for abortion,” she said. “We have to really get away from putting party before Christian values.”

Turning her attention to Alaska Jackson took issue with how the state impedes the ability of voters to keep elected officials and judges accountable for their actions.

She criticized the controversial selection process by which judges are appointed through a policy largely controlled by Alaska Judicial Council. According to the Alaska Constitution, the seven-member Judicial Council submits to the governor a limited number of names from which he can choose judges to fill vacancies. Alaska voters only ever vote on whether to retain individual judges after their terms are up.

“I hear that your courts are appointed, and they are reversing some serious and strong legislative measures that you’ve done,” she said. “Why don’t you guys just elect your judges so they can be at least a little bit answerable to the people they serve.”

In her district, judges are held accountable, Jackson said.

She was also baffled that Alaska has not moved the capitol from Juneau to Anchorage to allow people access to their representatives. She couldn’t believe Alaskans have to “fly or boat” just to get to meet with legislators.

“I don’t understand how you take it away from your constituents, the ability to come advocate for themselves,” Jackson said. “On the issue of pro-life it makes a difference when a child comes and says, I’m a survivor of abortion and I stand in your district. That’s what you guys are missing.”