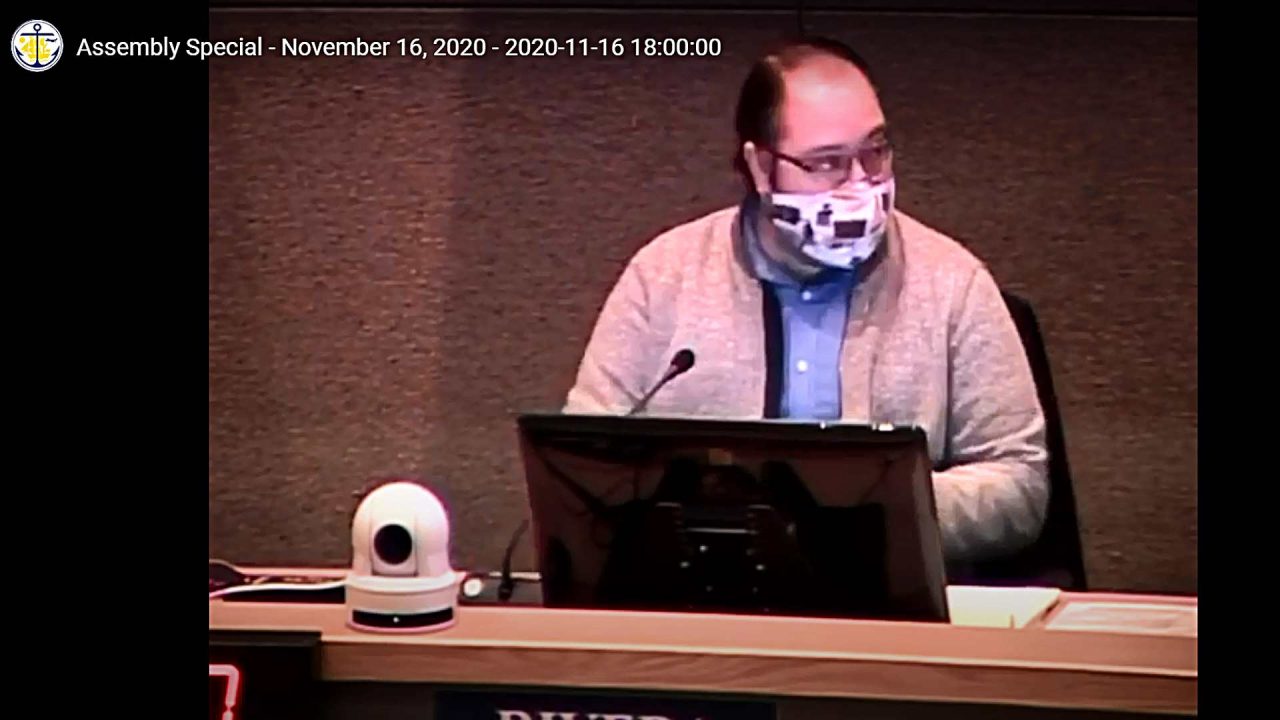 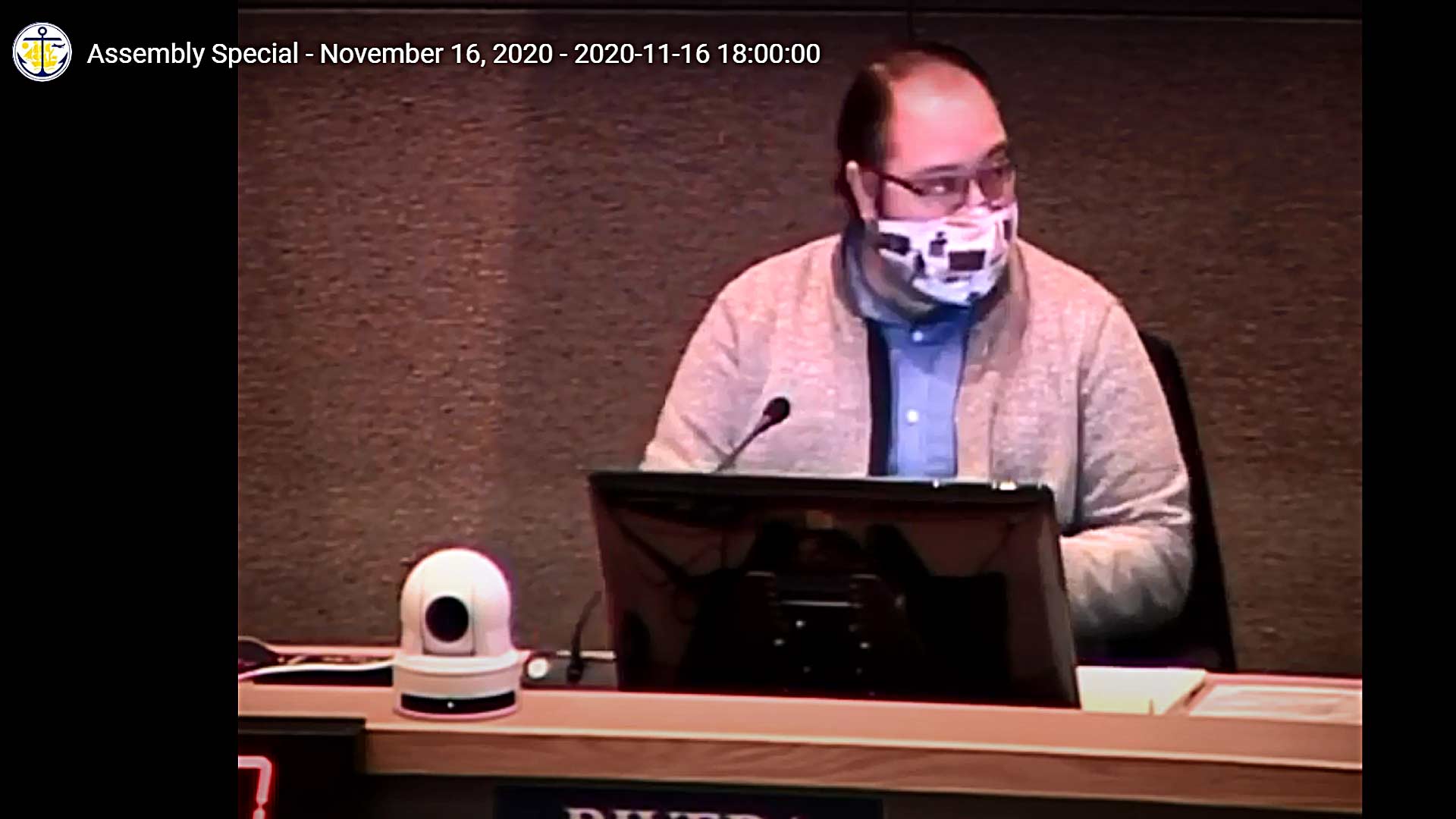 After two hours of public testimony which overwhelmingly opposed extending the emergency declaration in Anchorage, the Assembly voted 7-3 to keep it until at least Jan. 15.

The passage allows Anchorage’s unelected acting mayor, Austin Quinn-Davidson, to continue imposing broad COVID-inspired orders across the city, including mask mandates, regulations on gatherings – including religious services – and orders that have crippled businesses over the past eight months.

Public comments included four people who backed the emergency declaration and 24 opposed. In voting to extend the declaration for the sixth time, Assembly Chair Felix Rivera downplayed public testimony, suggesting that it was not reflective of the larger community.

Rivera added that he thought most Anchorage residents “get it” and support ongoing mandates across the city. Despite testimony to the contrary, he drew attention to what he claimed were “many more thousands (who) are watching online, who are watching on tv, who emailed us, who reached out to us … It is clear to me how my constituents feel about this emergency declaration.”

Throughout the meeting, Rivera warned the public to refrain from short bursts of applause or brief laughter – saying it was rude and inconsiderate. At several points he threatened to remove anyone who failed to abide by his demands, including those who were not masking up.

Following the vote, Christine Hill, who is active in political circles across the city, took to the microphone to address Rivera’s actions and those of the Assembly’s majority members.

“You are hurting the community – it’s just quite horrible,” Hills said. “This is disgusting. And you are so correct Felix. What you see in this room here is just a tiny bit of Anchorage, Alaska.

She said the Assembly’s actions have stirred Anchorage residents to get involved with local politics and that “things have changed, and you will see that when the elections come up.”

“I have never seen anything like this,” Hill added. “You’re not allowing us to clap. You don’t allow us laugh. You are suppressing the people of Anchorage. It’s cruel.”

During public comment many addressed the impact that school closures and restrictions on businesses and group gatherings are having on the wider community’s mental and economic health.

Russell Blacker, who owns Frontier Assisted Living facility, said his residents are suffering from isolation and loneliness due to COVID. He supported opening the city up more widely, while focusing on keeping the vulnerable safe.

Following public testimony, two other invited guests from the medical community were asked to speak.

Dr. Nick Papascostas, who serves as vice president of the Alaska chapter of the American College of Emergency Physicians, spoke in favor of extending the emergency declaration. He said it was necessary because hospitals were running close to capacity and that a continued rise in COVID cases could compromise the ability to serve patients.

He did admit, however, that hospitals almost always operate near capacity, but especially this time of year.

The Assembly also asked infectious disease doctor Andrea Caballero to provide testimony. She works with Providence Alaska Medical Center, Alaska Regional Hospital and St. Elias Specialty Hospital. While hospitals still have adequate capacity and ability to treat patients, she echoed Dr. Papacostas’ concerns that this might not be the case if COVID continues to spread.

In a city of 290,000 residents, Anchorage currently has 81 people hospitalized who have tested positive for COVID, although that does not mean they are hospitalized due to COVID-related illnesses. In terms of capacity, Anchorage has available 74 inpatient beds, 47 ICU beds and 138 ventilators.

Assemblywoman Jamie Allard asked  Caballero whether local hospitals were needing to prioritize patients at this point due to overcapacity. That is not the case, Caballero said. Upon further questioning from Allard, Caballero also acknowledged that both Providence and Regional are continuing with elective procedures and that there is adequate personal protective equipment for health care workers.

Assembly members Allard, John Weddleton and Crystal Kennedy all voted against extending the emergency declaration to the end of the year. Weddleton, however, said he actually supported the resolution but thought the vote should have been postponed one day to allow Kennedy to bring forth amendments.

Kennedy said the emergency orders are far too broad, and give acting mayor Austin Quinn-Davidson far too much power to impose “any orders necessary” to combat COVID. She worried about the government being able to enforce restrictions even inside private homes if the mayor sees fit.

“We don’t put any parameters on that,” she said. “It is so dangerous to have this level of power in a time when things are so unknown that nobody really knows what’s coming down the pike in terms of restrictions and requirements and mandates … That’s just totally unacceptable.”