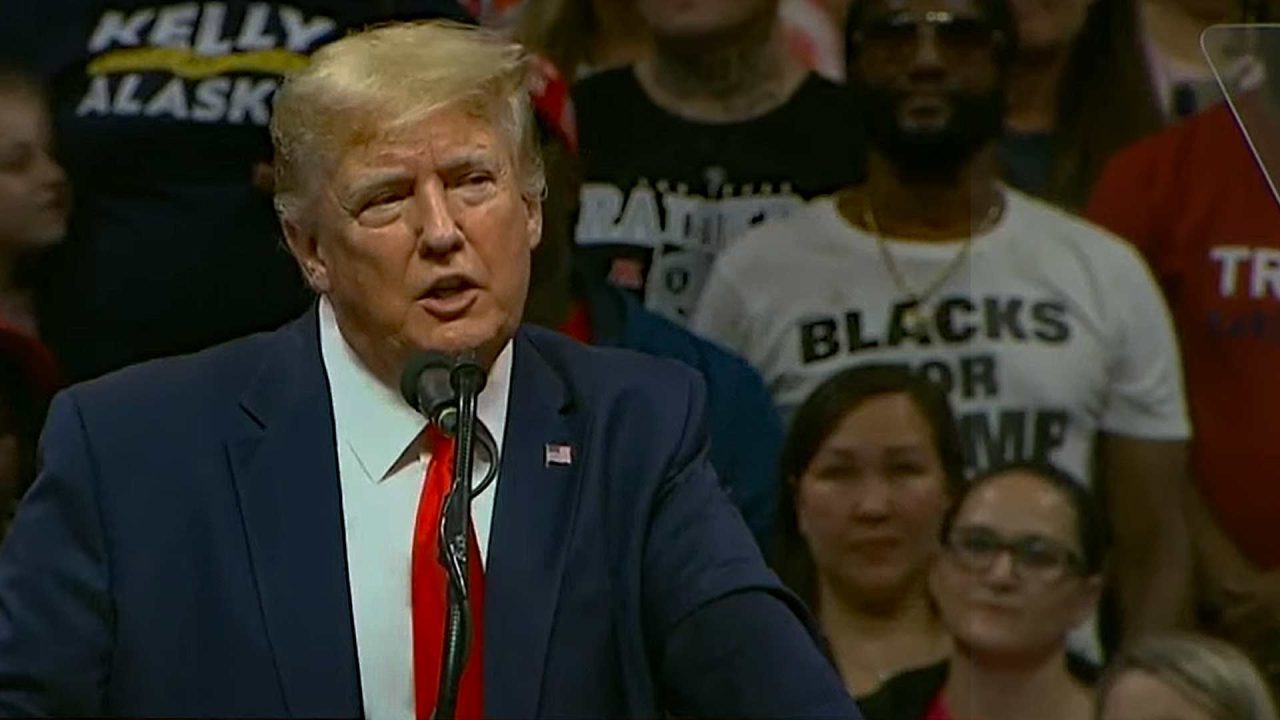 Trump train thunders into Alaska for a record-breaking rally 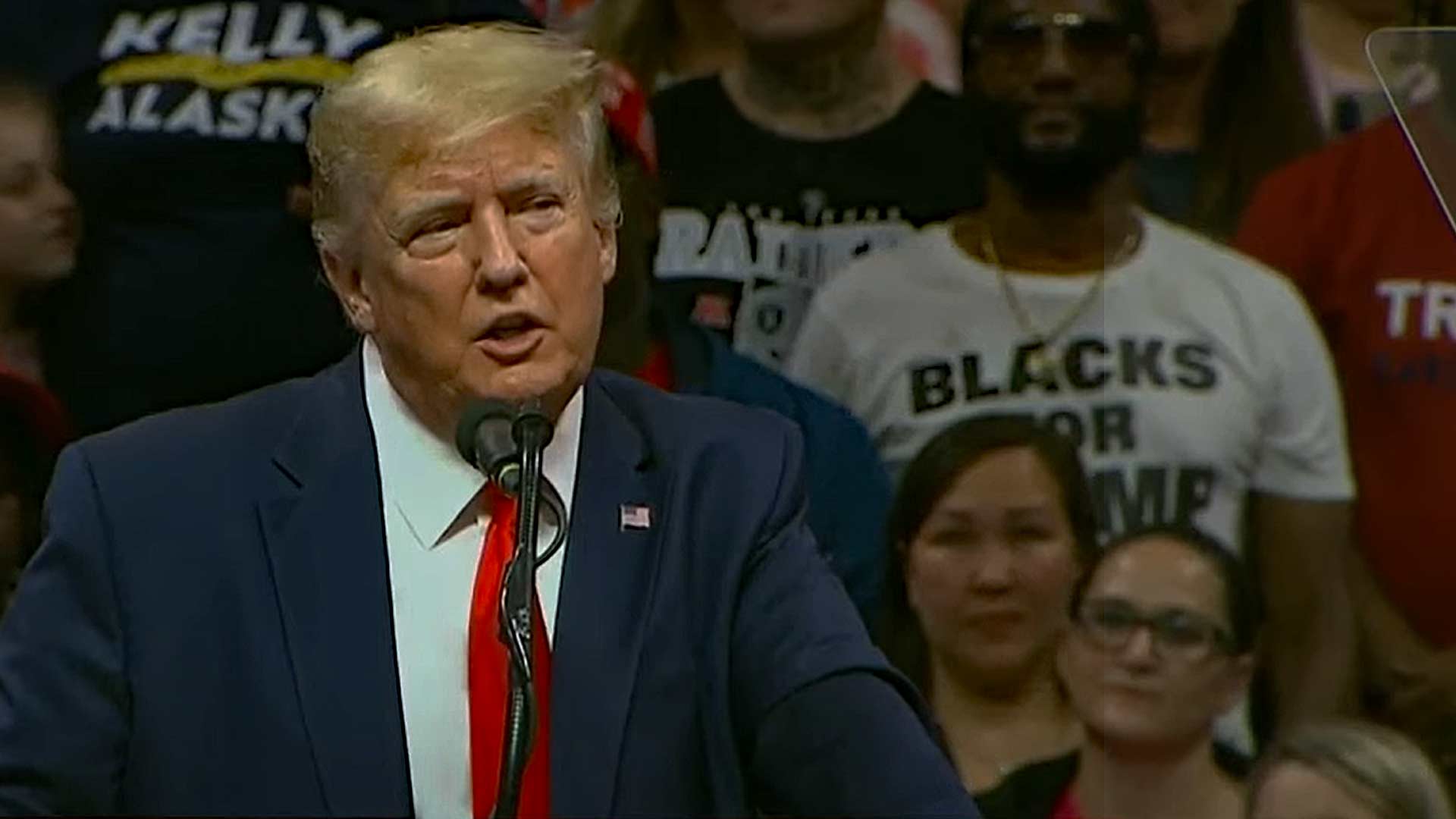 When former President Donald Trump pulls into town, he attracts a long and colorful train in his coattails.

On July 9, the ongoing national Trump tour thundered through Anchorage’s Alaska Airline Center arena with a building-record of nearly 6,000 people in attendance. As promised last year, Trump came to endorse Kelly Tshibaka in her bid to unseat U.S. Sen. Lisa Murkowski, and to boost Sarah Palin in her campaign to win the U.S. House seat that is now vacant after the recent death of Rep. Don Young.

Gov. Mike Dunleavy, who was also scheduled to get an endorsement from Trump, failed to show up with rumors swirling that he might get booed on stage by many conservatives who are leaning toward challengers Charlie Pierce and Christopher Kurka.

Pierce’s running mate Edie Grunwald was on hand, as was Christopher Kurka. Both candidates mingled with attendees and talked up their campaigns. Dunleavy’s social media posts didn’t even mention the state’s largest political rally of the year. Instead, he wished Alaskans a happy Alaska Flag Day.

There were, however, scores of state legislators, school board and city council members and various candidates vying for office this fall. At one point, Trump acknowledged the presence of Anchorage Mayor Dave Bronson, which drew a rousing ovation.

In addition to endorsing Palin and Tshibaka, Trump had some harsh words for U.S. Sen. Dan Sullivan who pledged to back Murkowski’s re-election campaign.

In a March 2021 ABC interview, Sullivan cited the many times Murkowski had supported his political career, and said he would return the favor even though Alaska’s Republican Party has rejected Murkowski for what they see as her blatant abandonment of core Republican values surrounding pro-life issues, oil and gas development, Supreme Court nominees, protection of gun rights, transgender politics and more.

Murkowski, who has held her U.S. Senate seat since 2002, has also been a longtime critic of the former president and was one of seven Republican senators to vote to convict him in the 2021 impeachment trial.

“How Sullivan doesn’t come out and denounce her is amazing to me,” Trump said. “Dan Sullivan should be ashamed of himself.”

But public endorsements and the effort to defeat Murkowski were only part of a much larger rally that clearly hinged on Trump’s physical presence in Alaska.

People endured long road trips from all along Alaska’s sprawling road system, some driving upwards of 800 miles, round-trip, to be there. Attendees from Talkeetna, Homer, Delta Junction, Fairbanks, Mat-Su, Valdez and beyond were all there, as were thousands of Anchorage and Eagle River residents.

One couple said they spent roughly $300 in gas just to see the former president speak.

In the lead up to the event, hundreds of people milled about the Alaska Airlines Center before 6 a.m. to stand in line for a front row seat. Half a dozen tents were erected from vendors who crisscross the nation following Trump and selling MAGA hats, shirts, flags, stickers, wallets, keychains, posters and more. Food trucks were also stationed on the property, as were some 30 port-a-poddies and a jumbotron for anyone who turned up after the building was filled to capacity.

Standing in a line that snaked around the arena and all along Providence Drive, many people could be heard engaging in lively political discussions about election integrity concerns, the U.S. Supreme Court’s recent decision to strike down Roe v. Wade, the need to shore up border security and the high cost of gas and rising inflation.

But concerns over the direction President Joe Biden and Congress have taken the nation didn’t seem to dampen spirits on the mostly sunny morning. Chants of “U.S.A.,” “Let’s Go Brandon,” and others spontaneously burst from the energized assembly.

There were, however, a small handful of protesters. One man yelled into a megaphone, quoting scripture passages and denouncing Trump supporters for failing to focus on America’s spiritual needs. Several others held pro-abortion signs in protest to Trump’s Supreme Court picks who recently helped overturn Roe v. Wade and return the abortion question back to each state to decide.

As the crowd made its way to the arena, they passed by Secret Service members, Anchorage Police, Alaska State Troopers and members of Trump’s private security team. To get into the venue, attendees walked through a heavily-manned security station, equipped with metal detectors and bomb-sniffing dogs.

Once inside the building, they were greeted by more than 200 friendly volunteers who answered questions and ensured wandering attendees avoided several restricted areas.

A small group of VIPs paid upwards of $20,000 to privately meet with Trump and get their pictures taken with him.

After the first three to four thousand people were inside the arena, a series of opening speakers came to entertain and energize the crowd. Mike Lindell, CEO and founder of My Pillow, talked about the need to secure election integrity and do away with Dominion voting machines.

Around 2:30 p.m. Palin walked onto the stage in black designer jeans and a sky-blue leather jacket. She was welcomed, mostly with cheers, but a few boos from those who were likely Nick Begich supporters. Begich and Palin are the two Republicans squaring off, along with Democrat Mary Peltola, in the Aug. 16 ranked-choice election to replace Rep. Young.

In signature form, Palin won over the crowd with well-timed phrases about the need to take back America and reestablish conservative values. At one point she slammed the newest member of the U.S. Supreme Court – Ketanji Brown Jackson – for refusing to answer a question during her confirmation hearing, asking her to define a woman.

“I bet there are some Alaska chicks who could help her out,” Palin said to thunderous applause.

Kelly Tshibaka was up next, telling Alaskans that is “time for a change” in the U.S. Senate. She highlighted her history of growing up in Alaska, along with how she differs with Murkowski when it comes to a litany of key issues such as supporting resource development, protecting unborn human life and others.

About an hour after Tshibaka left the stage, Trump entered the arena to deafening cheers. In addition to wholeheartedly endorsing Palin and Tshibaka, he made a passing remark that Alaskans should also support the conspicuously absent Gov. Dunleavy.

The former president spent much of his one-and-a-half-hour talk laying out the differences between himself and President Joe Biden. He blasted Biden for weakening the military and blundering the U.S. exit from Afghanistan by leaving behind Americans and valuable high tech military equipment. He also criticized Biden’s radical stance on abortion and LGBTQ politics, his attack on oil, gas and timber development in Alaska, and his allowing Iran to build a nuclear weapon. Trump also pointed out Biden’s inability to avert a Russian conflict in Ukraine.

He highlighted the fact that the economy has suffered under high gas prices and inflation levels not seen in 40 years.

But Trump also regaled the audience with personal stories of how he witnessed U.S. pilots land Air Force One under the cloak of darkness in Iraq, and he recalled a conversation he had with a general on how to finally destroy ISIS.

Trump concluded on a positive note, telling the crowd that “soon we will have greatness again.”

He reiterated that Alaska must remove Murkowski from the U.S. Senate and then told the audience that there are no obstacles America cannot overcome.

He assured the crowd that the enemies of freedom, and those who seek to weaken the police, the military, religious freedoms, parental rights and protections for the unborn do not stand a chance.

“Because we are Americans and Americans kneel to God and God alone,” he said. “This incredible journey that we are on has only just begun and it is time to talk about greatness for our country again.”

“Thank you, Alaska,” Trump concluded. “God bless you all.”