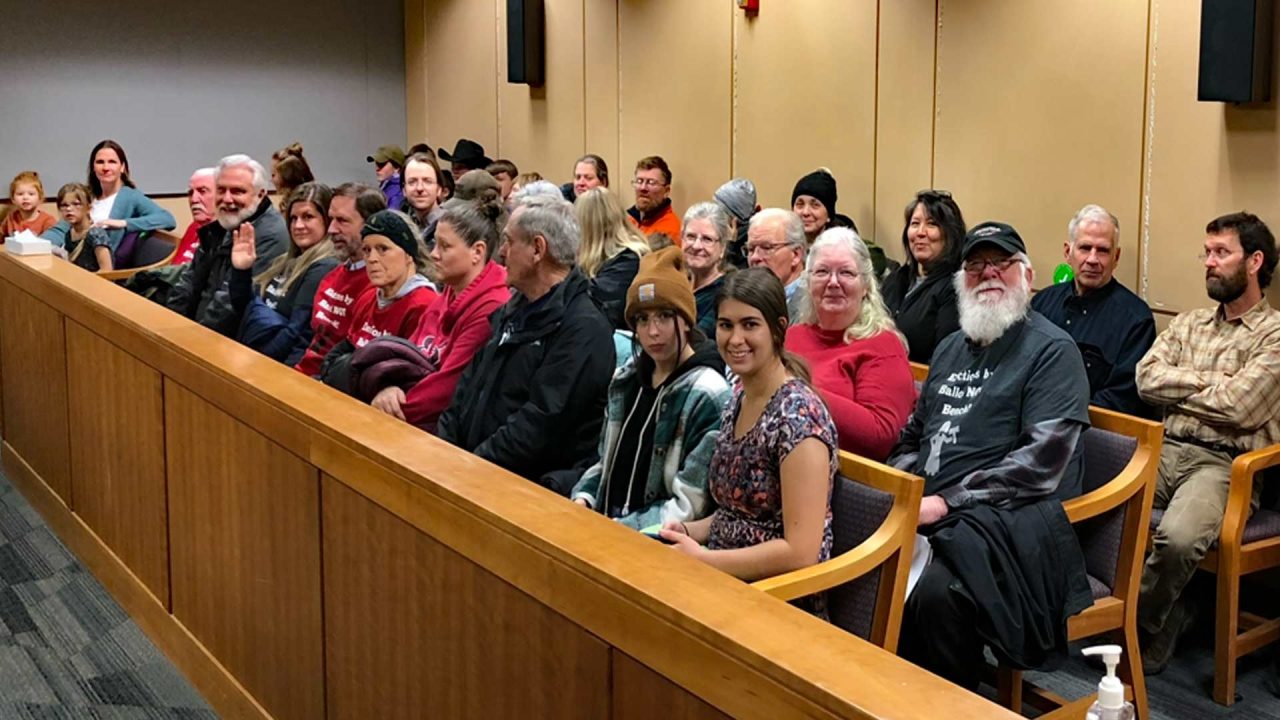 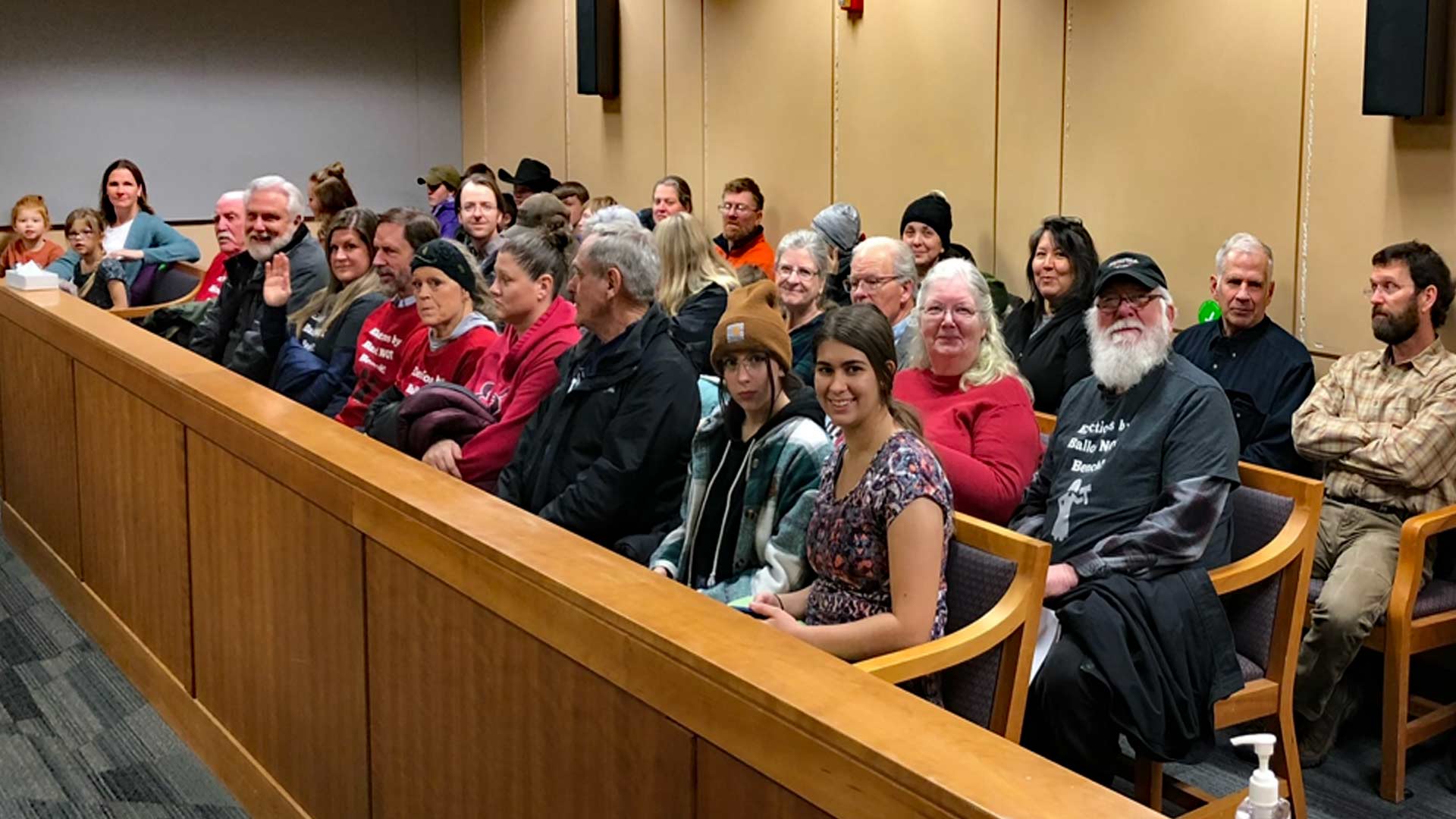 Roughly 50 people packed a standing room only Anchorage courtroom on Oct. 25 in a show of support for Wasilla State Rep. David Eastman. Another 10 people stood outside during a preliminary hearing in a case that seeks to disqualify the three-term state legislator from holding public office.

The pro-Eastman crowd wore red t-shirts emblazoned with, “Elections by Ballot NOT by Bench!” This was in reference to the fact that the plaintiffs in the case want a judge to unilaterally disqualify Eastman from holding office, regardless of whether voters choose to re-elect him in November for a fourth consecutive term as their elected state representative.

The case centers on a claim by former Mat-Su Assemblyman Randall Kowalke alleging that Eastman’s association with the national Oath Keepers organization violates the Alaska Constitution’s loyalty clause, which prohibits people from holding public office if they belong to a group that “advocates the overthrow by force or violence of the United States or of the State.”

Kowalke’s assertion that Oath Keepers is an insurrectionist group hinges on the fact that a tiny percentage of its members were charged – but not convicted – in the events that unfolded on Jan. 6, 2021, at the U.S. Capitol. Two members of the 38,000-member national organization pleaded guilty of seditious conspiracy to try and stop the certification of the presidential election, but Oath Keepers’ bylaws in no wise call for the overthrow of the government, nor has Eastman.

Eastman’s association with Oath Keepers is limited to a donation he sent the group in 2010, which resulted in a “Lifetime membership” certificate sent to him via mail. Eastman maintains he has never attended an Oath Keepers’ rally or event, and it’s not clear he has any active role in the group.

Earlier this summer, Kowalke asked the Division of Elections to remove Eastman from the ballot. The agency declined, saying Eastman was a candidate in good standing, regardless of whether he is an Oath Keepers member.

Anchorage Superior Court Judge Jack McKenna, who is presiding over the case, has ruled that Eastman can remain on the Nov. 8 ballot, but if voters elect him – as expected – the Division of Elections is not allowed to certify the results until after the trial’s conclusion.

Last month, Judge McKenna said that if Eastman loses the case, the Division of Elections could give his House District Seat 27 to the runner up.

Eastman – a state legislator since 2016 – remains popular among his Mat-Su constituents, as was evidenced at the packed courtroom on Oct. 25. During the recent primary election, he easily outpaced his two challengers. Eastman’s constituents, however, are concerned that their representative must overcome what they view as a politically motivated trial, perfectly timed to cast a shadow over his candidacy.

At the Oct. 25 hearing, plaintiffs said their case against Eastman would take about 8-10 hours to present, but they then raised an objection to the fact that Eastman has filed a witness list with 45 people on it for his defense.

Kowalke’s attorney claimed the long list was an attempt to “extend the trial long enough that it would be hard for the court to grant effective relief,” and asked the judge to limit the time each party has to call witnesses.

Eastman’s attorney – former U.S. Senate candidate Joe Miller – countered, saying he needs sufficient time to establish the facts of the case. In particular he wants to address the question of whether Oath Keepers truly advocates for the violent overthrow of the government. If Miller can show that it does not, the claim that Eastman is part of an insurrectionist group will likely collapse.

“It’s really the core question for the court,” Miller said via teleconference at the Oct. 25 hearing.

Miller added that he aims to address what actually unfolded on January 6 at the U.S. Capitol and whether Oath Keepers ever officially advocated for violence that day.

“Or on the other hand did the organization actually act to support law enforcement in many respects,” Miller said.

Miller noted that he also wants to look at the “overarching question” of whether “outside of Jan. 6, does this organization advocate in a way that would put Rep. Eastman in violation of the [Alaska] loyalty clause.” Finally, Miller said there is a key question about to what extent Eastman is an active member of the group at all.

Miller said wants the trial to resolve quickly, but he needs about a week bring witnesses, including a few experts.

There is still a motion to change the location of the trial to the Mat-Su where Eastman lives. This request has not yet been decided by the judge.

Another pretrial conference to work out final details is set for Nov. 17 – nine days after the midterm election.

After the Oct. 25 hearing, Eastman visited with his supporters in a large gathering outside the courtroom. He also spoke on camera with Politadick, a Mat-Su based political blog.

“It’s unfortunate that this is all taking place during an election campaign, but there’s a lot more work to be done just to get the facts before the court between now and the election,” Eastman said. “Pretty important case, I think.”

Eastman said the case is a “turning point where those who might like to say they believe in elections and trusting the will of the voters, are arguing in court the exact opposite. They are arguing the voters should not be trusted to make some decisions.”

In a memo sent to Judge McKenna last month, Eastman said the case is likely to have an impact on his political campaign in the lead up to the election.

On Oct. 25, Eastman said he doesn’t fault the judge for presiding over such a case, but said there is “a lot of danger and a lot of damage being done, just by virtue of the case going forward right now.”