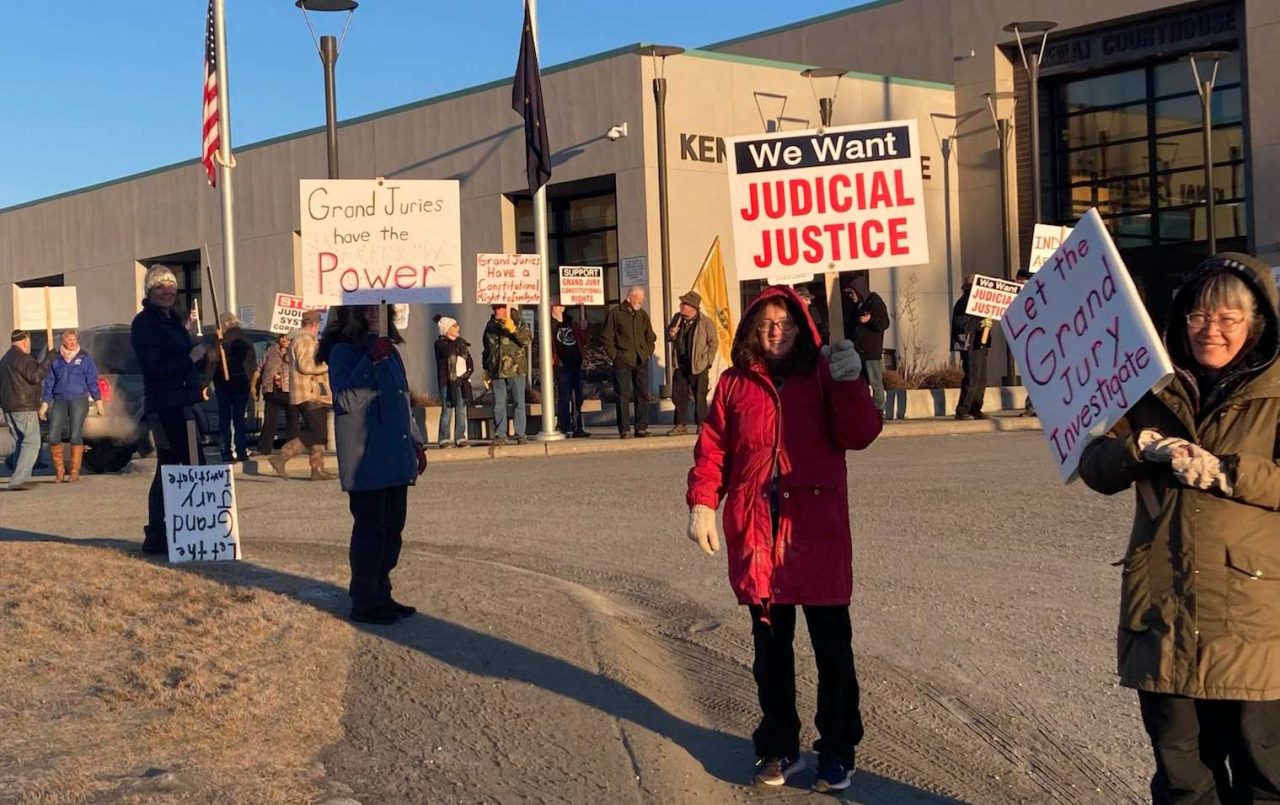 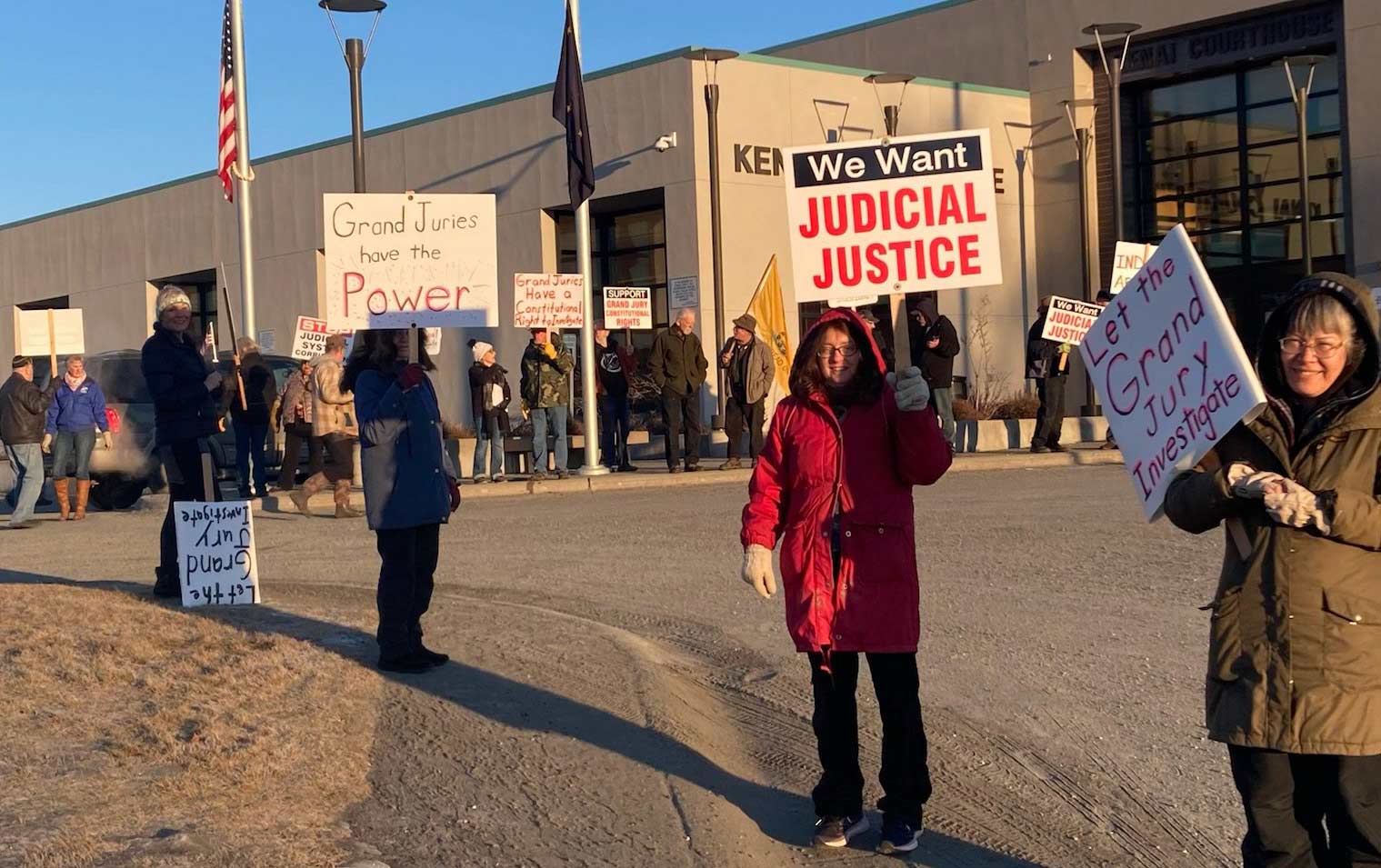 Nearly 100 Mat-Su residents turned out for an explosive presentation accusing the Alaska Supreme Court of violating the constitutional rights of citizen grand juries. The Jan. 9 talk by longtime judicial watchdog David Haeg included a call for attendees to participate in a March 15 statewide courthouse sit-in to demand that the high court honor the constitution with regard to grand jury rights.

Speaking at Real Life Church in Palmer, Haeg was introduced by organizer Edna DeVries, who hosts the weekly School of Government meetings. She also serves as mayor of the Mat-Su Borough.

For the next two hours, Haeg explained his decades-long struggle to fight judicial corruption in Alaska – a fight that is now coming to a head.

Haeg, who has spearheaded large and growing protests outside the Kenai Courthouse for much of the past year, explained that the Alaska Supreme Court recently issued an order, effective Dec. 1, 2022, which rewrites the official rules governing citizen grand jury rights. In particular, the new rules suspend the ability of grand juries to investigate and indict corrupt public officials, limits who they can indict, and suggests that their investigative authority does not extend to individual court cases or queries into why the Department of Law may have declined to prosecute particular cases.

As Haeg explained to the Mat-Su gathering, the changes were issued soon after a Kenai grand jury subpoenaed Alaska’s only judge investigator for the last 34 years, Marla Greenstein, who serves as executive director of the Alaska Commission on Judicial Conduct. The subpoena was issued this past summer.

Haeg pointed out that the new rules also prohibit citizens from directly appealing to grand juries for justice, which is one of the body’s main functions.

Haeg pointed out that Greenstein has conducted roughly 8,000 judge investigations over the past four decades, and he said he has strong evidence that she has falsified official investigations and certified documents to keep corrupt judges on the bench.

According to Haeg, the new grand jury rules from the Supreme Court appear to directly conflict with what Alaska’s Constitutional Convention delegates intended for grand juries when they stated,  “The power of grand juries to inquire into the willful misconduct in office of public officers, and to find indictments in connection therewith, shall never be suspended.”

In addition to curtailing grand jury investigative powers, Haeg pointed out that the new rules also prohibit citizens from directly appealing to grand juries for justice, which is one of the body’s main functions.

Yet, as Haeg, pointed out,  the original Alaska Grand Jury Handbook (pages  5 and 6) states: “Charges of crime may be brought to your attention in several ways: (4) by private citizens heard by the Grand Jury in formal session, with the Grand Jury’s consent. [A] citizen is at liberty to apply to the Grand Jury for permission to appear before it in order to suggest or urge that a certain situation should be investigated by it.”

Not only are the new rules, unconstitutional, Haeg said the manner in which they were imposed violates due process.

Haeg noted the obvious conflict of interest. If a grand jury must first get approval from judges and/or district attorneys, they will never be allowed to investigate these same officials if they become corrupt.

Haeg claimed that the new rules also violate Alaska Statute, which states, “If an individual grand juror knows or has reason to believe that a crime has been committed that is triable by the court, the juror shall disclose it to the other jurors, who shall investigate it.”

Not only are the new rules, unconstitutional, Haeg said the manner in which they were imposed violates due process.

Changes to grand jury rules are supposed to happen in consultation with the Supreme Court’s 13-member Criminal Rules Committee. This, however, did not really occur. Instead, committee members were merely informed that the Supreme Court wanted to make the changes.

When told of the pending changes, only three of the 13 Rule Committee members had time to respond. Two of them told the Supreme Court “the full committee should consider the proposed changes at a meeting” because of a concern that “the rule changes were important and serious changes of a constitutional nature and should not be rushed through.”

Despite this warning, the Supreme Court approved the changes on Nov. 29, 2022, without holding a single Rules Committee meeting, even though a meeting had already been scheduled for December 16 – just 18 days later.

In a recent letter to the Kenai grand jury, Haeg said that the main purpose in rushing the rule change was to “suspend your power to recommend or indict before you are finished with your investigation.”

Additionally, Haeg pointed out that the plan to alter the rules was already well underway back in August, when Alaska Supreme Court Justice Daniel Winfree sent a letter to Attorney General Treg Taylor to work out the details of the changes without involving the Rules Committtee.

“Why was the Rules Committee (who is supposed to change the rules) never notified until just before the Supreme Court passed the change in late November?” Haeg asked the Kenai grand jury.

On Jan. 12, Haeg sent a separate email to fellow citizens who are concerned about the recent actions of the Supreme Court. He asked these supporters to write directly to the Kenai grand jury and to encourage them to continue their investigations, including expanding their investigation to learn why the Alaska Supreme Court unconstitutionally altered the rules governing grand juries.

“This may be the single most effective thing anyone can do – for it will let the Kenai grand jury know that We-The-People have their back,” Haeg’s email states. “And let the Alaska Supreme Court know their unconstitutional suspension of Grand Jury powers is unacceptable.”

— Click here to add your signature to a letter urging the Kenai grand jury to continue its current investigation.