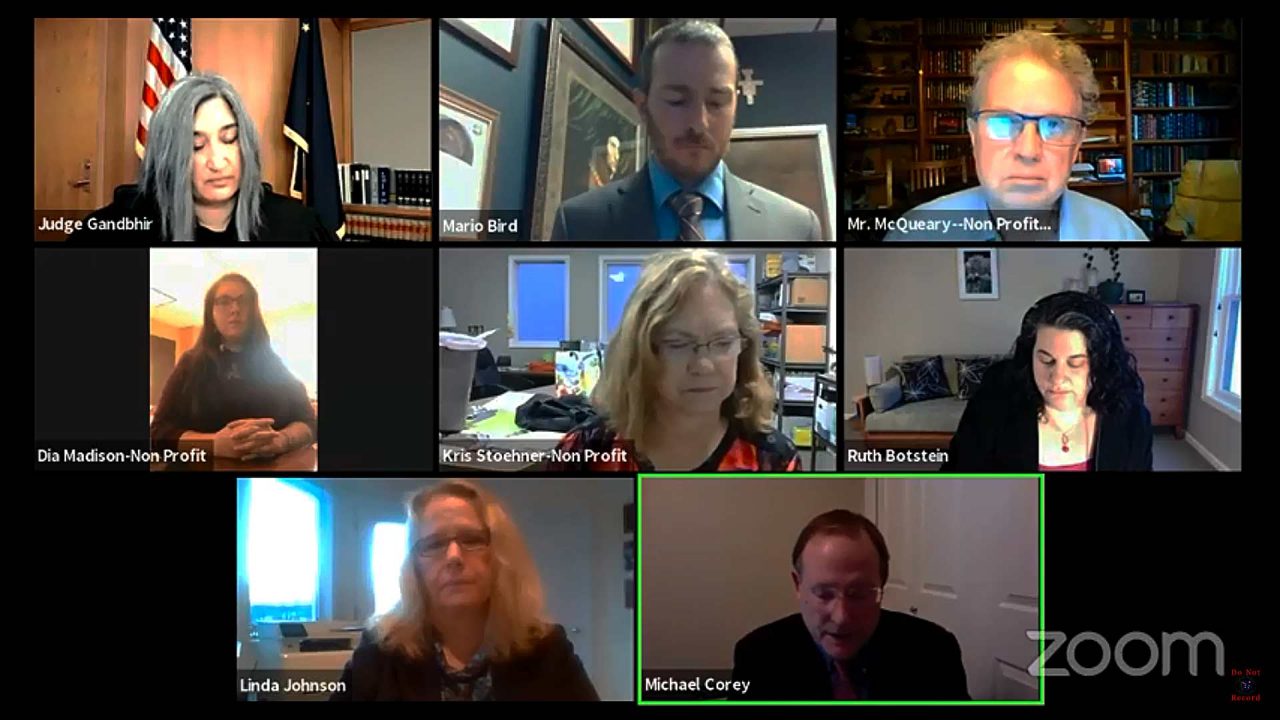 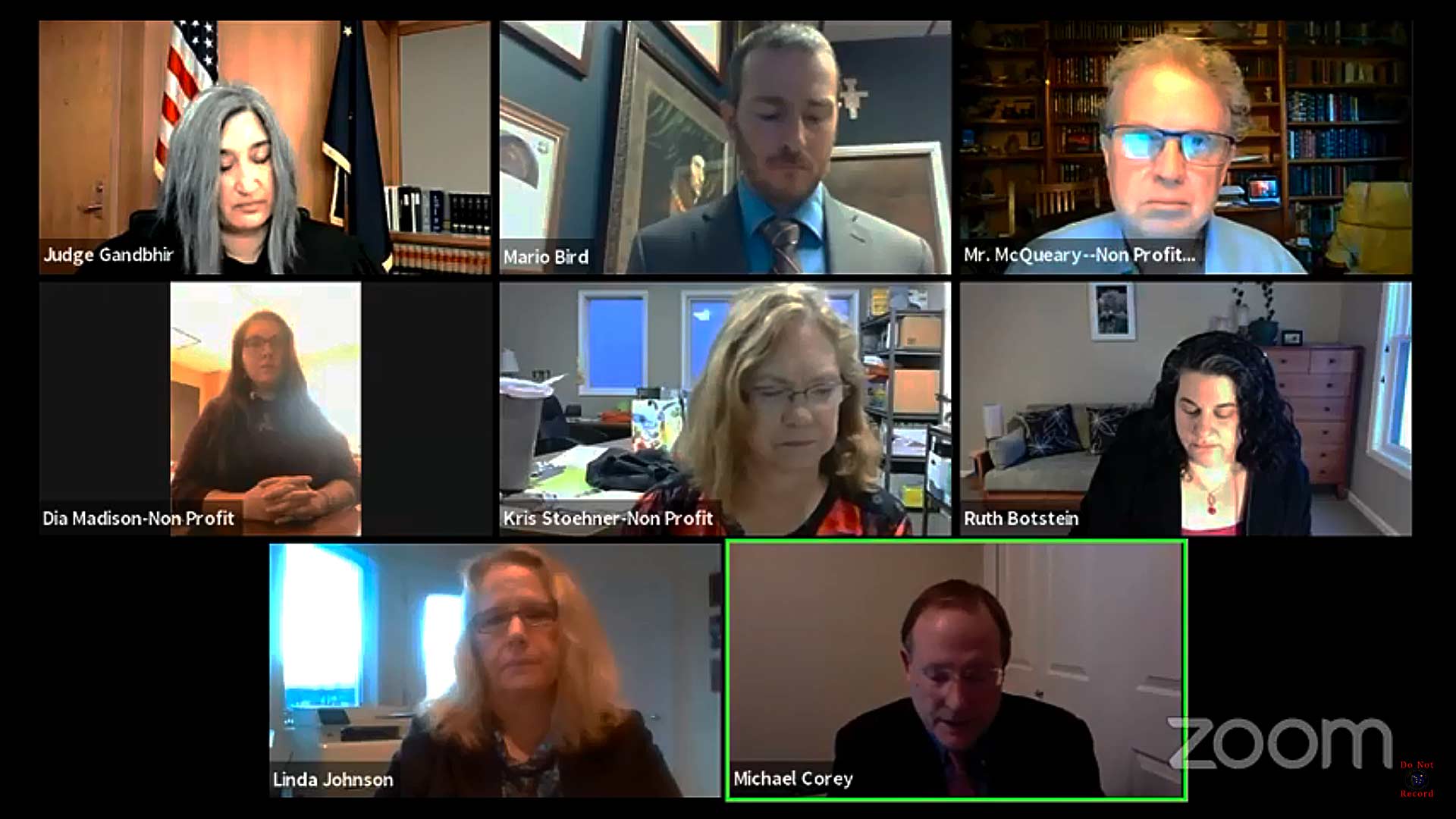 Mike Corey, representing Alaskans for Open Meetings, said the Assembly’s actions infringed on the people’s right to assembly and free speech, and he asked the judge to temporarily enjoin the Assembly from holding any future closed-door meetings until the full lawsuit can be heard.

Corey opened by stating that “everyone one of us has the obligation to follow the law,” including Anchorage Assembly members. The fact that they met in person and allowed municipal employees and invited guests into the Assembly Chambers, while locking the doors to the public, shows an “arrogance” with regard to the law, he said.

“They can’t make it up as they go – it’s not a discretionary matter,” Corey added. “It’s pretty clear that if the Assembly is in session, the public gets to be there.”

For now, Corey said his clients are only asking the court to place an injunction to prohibit the Assembly from holding any future closed-door meetings while the case progresses. He left open the possibility, however, of asking the court to void any Assembly actions that were taken in August when the public was locked out and relegated to only telephonic and email testimony.

If a government body is going to meet in person it has to extend that same courtesy to the public.

Corey addressed the COVID-19 concern which the Assembly used to justify locking its doors. He said he sympathizes with those who have been impacted by the virus and does not “intend to demean their suffering.” Ultimately, however, he said the law must protect rights not just in good times, but also during difficulties and trials.

Corey pointed out that the Assembly did not think COVID was sufficiently troubling to prohibit them from meeting in person, or allowing municipal employees and others to be physically present. The in-person ban only applied to the general public, and during a time when the Assembly was passing highly controversial measures such as using federal coronavirus relief funds to purchase city buildings for homeless projects.

Additionally, he pointed out that the Assembly rejected a proposal by Assemblywoman Jamie Allard to allow just one member of the public into the building at a time. Corey called this decision “completely irrational” and highlighted that Anchorage residents were still free to shop all around town at the time.

Telephonic testimony is supposed to enhance public access, not serve as a substitute.

Corey said the Assembly’s claim that telephonic and online testimony was adequate to legally satisfy the Open Meetings Act was wrong. Telephonic testimony is supposed to enhance public access, not serve as a substitute, he said.

“The reality is that e-presence is not good enough,” Corey emphasized. He noted that even Alaska’s court system does not hold criminal trials via teleconference, despite COVID.

With regards to the larger aim of eventually asking the court to void the Assembly’s actions in August, Corey said the court should not bite on the municipality’s claim that they have simply done too much work to have it all undone. He suggested the Assembly could go back and revisit their decisions in open meetings.

Attorney Ruth Botstein, representing the city, argued that the Assembly’s August meetings complied with state law because the public could participate remotely. She said the meetings were not “in any way secret,” and that “Everything the Assembly did was open to public view.”

Botstein also urged the court to consider COVID and the fact that there was an emergency ordinance in place restricting public meetings. She called it an “extraordinary circumstance” that required modifying procedures.

Plaintiff Attorney Mario Bird retorted, “If a government body is going to meet in person it has to extend that same courtesy to the public.” Failure to do so is a denial of equal access, he maintained.

Corey challenged the merits of the city’s claim that the Assembly could not possibly go back and undo its action because they are “just too big to fail.” He said the court should not let illegal actions stand simply because the Assembly has done so much work behind closed doors. He said that was akin to a man who says he hasn’t paid his taxes in years and couldn’t possibly pay everything back now.

Judge Gandbhir’s questions indicated she is somewhat concerned about how to address contracts which have already been approved by the city and asked if the plaintiffs might consider their top priorities in terms of enjoining certain Assembly actions.

At a minimum the plaintiffs said the court should rule that all future Assembly meetings be open to in-person testimony and that the court enjoin the most controversial decisions which included approving CARES Act funds to purchase buildings for the homeless, approving the hiring of a chief equity officer and enacting a ban on counseling minors with unwanted same-sex attraction.

Judge Gandbhir ended the hearing by saying she would issue a written decision.