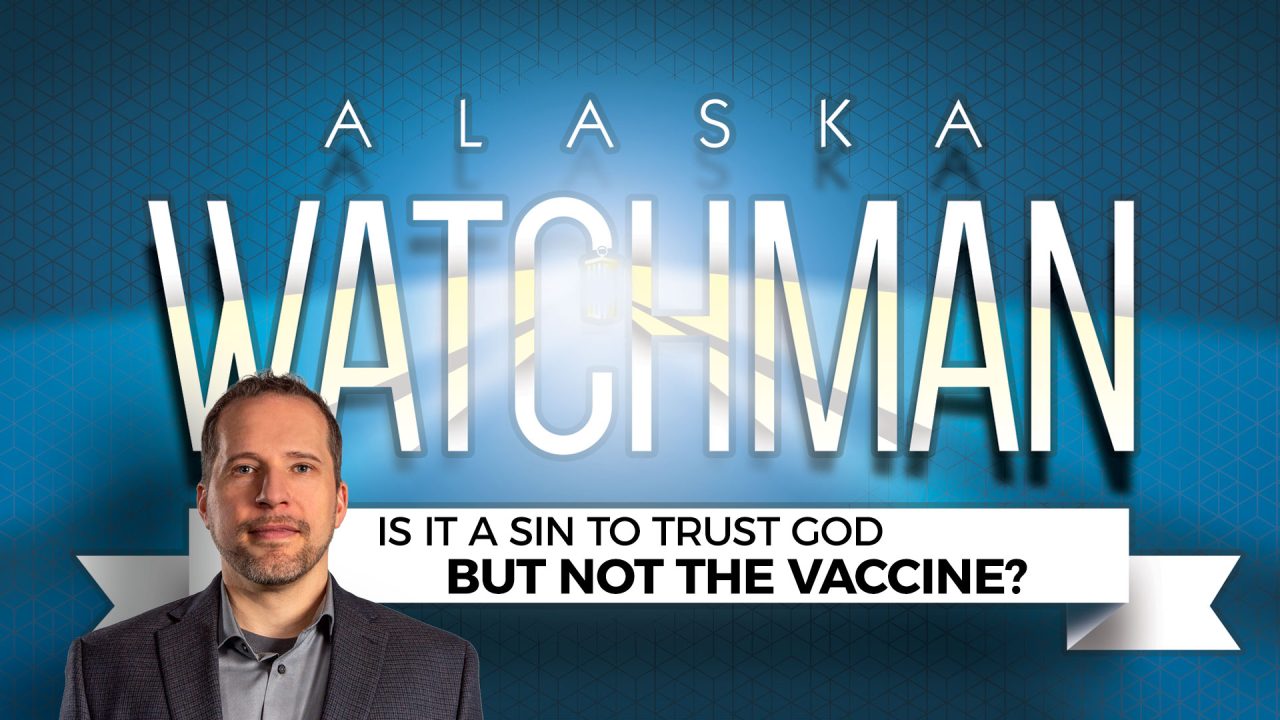 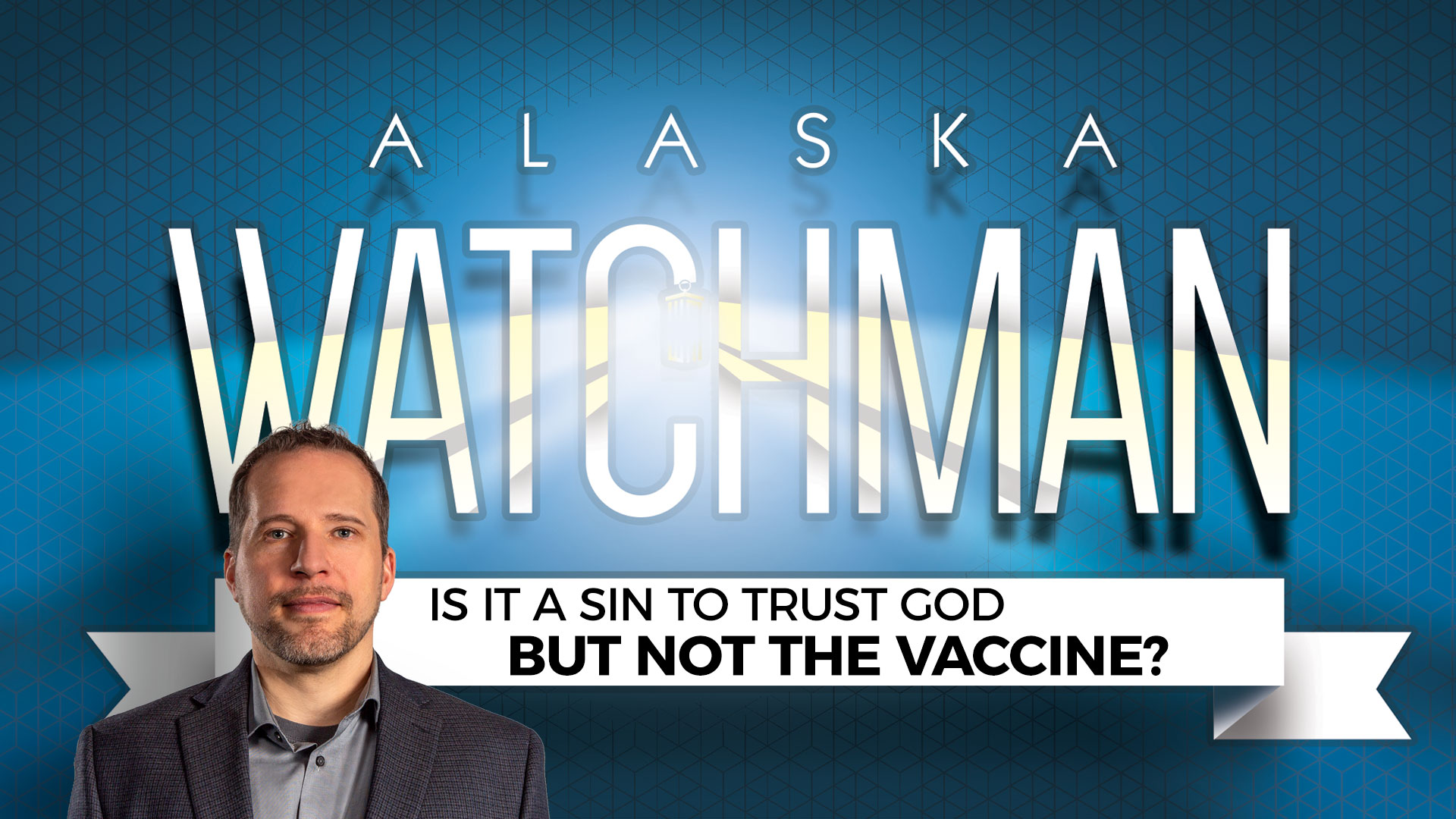 Recently, someone I respect shared something on facebook and people came out of the woodwork to like, love and share it. It was a from a Lutheran Pastor named Keith Marshall, who said that to claim a religious exemption to the vaccine is to take the Lord’s name in vain, as Christ clearly would have you get the vaccine. Pastor Marshall has been since lauded as a hero of heroes by some as well as excoriated and labeled a devil by others. Were it not for the anunciated concurrance of so many of my fellow Alaskans, I would think it not appropriate as a Watchman commentary, but since it is, then so be it.

Several things come to mind as laid out in his brief post. First, his question “What does faith in Christ exempt me from?” he answers with common, good scripture worth memorizing. His exemptions:

1) Putting my wants and needs above others.
2) Claiming my freedom in Christ as liberty to act without responsibility.
3) Refusing to protect the most vulnerable in our midst.

He then finishes this trio with the summation: therefore you can have your reasons but Jesus can’t be one of them because (he knows the mind of Christ) Jesus would have you do the first three things and therefore mask up and get vaccinated. All else is sinning and taking the Lord’s name in vain, claiming to be a follower of Christ when you are no such thing… you are vainly claiming to be a Christian.

This kind of thinking reminds me of GK Chesterton who wrote about the paradoxes of Christianity. Chesterton himself never read a word in defense of Christianity, he was driven to it by observing the contradictions of its critics. Christianity is all gloom and suffering and no fun, it is also too rosy in its outlook on life and the afterlife. Christianity is for cowards who would rather turn the other cheek, yet it is the mother of all wars. What could be so spectacular about Christianity that it’s critics don’t even mind constantly contradicting one another. His answer was that it must be the standard against which all things are measured true or not. It IS the truth, and it just so happens that for most people, any stick is a good stick with which to beat Christianity.

I’ll try and offer a respectful alternative to Pastor Marshall. His entire statement is based on his sincere belief, his fear, that your personal choice not to vaccinate may cause the death of your neighbor whom you are to love above yourself. The premise is that having recovered from COVID will protect your neighbor LESS than getting the shot.

His conclusion sounds true but his premise, in its entirety, is false. His statements aren’t false, and the scripture he cites effectively support his statements but it is his premise that leads him to these statements that is wrong. And rather than throw out the statement AND the sentiment and demonize the man, just consider the paradox of Courage, which can be defined as the strong desire to live taking the form of a readiness to die.

With a false premise, you can come to all sorts of wild conclusions.

In Israel now, you aren’t considered fully vaccinated unless you’ve had FOUR jabs. When does it end?

The bible tells us we do not struggle against the flesh, but against powers and principalities, and the forces of darkness both here and in the heavenly realms. Make no mistake, government is not a force of righteousness and pharmaceutical companies are not in it for the piety or the altruism. The COVID pandemic has enriched the three companies Phizer, Moderna, & Johnson and Johnson to over a combined 40 BILLION dollars in COVID Vaccine profits since the Pandemic began, but really, it’s only been about a year since they started mass producing. Over 40 Billion. The case counts from exaggerated asymptomatic testing and the death counts as reported have also been curated as a source of hysteria and fear, to sell products.

COVID exists in your system when you die, even from a car accident, and COVID will be on your death certificate, not as the primary cause, but one of the four contributors, and WILL be counted in the COVID death total. Get the vaccine however, and unless you die with the needle IN YOUR SHOULDER, its totally unrelated. Completely healthy men and women, stroke out a day or a week after the shot: unrelated. Normal woman develops debilitating nausea and vertigo that never goes away: unrelated. Heart attack 3 weeks post vaccine in a healthy man: utter coincidence.

Pastor Marshall and others base their fear that not getting vaccinated is what is causing all the continuing case counts and hospitalization, and yet as time marches on, the government and media in their advertising pockets are having to move the goalposts to keep people afraid and compliant. It’s the plague of the unvaccinated, clogging our hospitals, killing so many, and yet they keep moving the goalpost on what constitutes unvaccinated. Origianlly Fauci said at least one dose to be somewhat protected, then two, then two and some time. In Israel now, you aren’t considered fully vaccinated unless you’ve had FOUR jabs. When does it end?

In order to keep the hysteria humming the past 7 months or so here in Alaska, they’ve been averaging the vaccinated infections going back to January in order to obfuscate the percentage of vaccinated people entering the hospitals. To make it appear that only the unvaccinated are being hospitalized, when that is rubbish. So they move the goal post. Currently, you can get your second shot, and THIRTEEN DAYS later, sick as a dog, go to the hospital and guess what, Anne Zink will count you unvaccinated. Pointing that out is misinformation that needs censorship. We’ve been watching this play out for a year and a half.

If the safety of your neighbor, love of your neighbor, was at the root, why the need for such constant blatant manipulation? It certainly isn’t supported by science, if it were you wouldn’t see Pfizer scientists going on an on about Natural immunity being superior when they didn’t know Project Vertias was recording. Why does no one care about the litany of strokes, death, myocarditis, pericarditis and other side-effects of getting the vaccine if this was truly about your neighbor? Because we are not in a struggle with a man or woman, but a power that is given over to greed and control. God gives us a spirit of discernment for a reason. Instead of making a decision based on public hysteria funded by government dollars and ad revenue, this COVID recoveree makes one on faith. And scientific study after study confirms that natural immunity provides demonstrably better and longer lasting protection for you AND YOUR NEIGHBOR than injection. This has been the case for virtually ALL disease, so no surprise there. God has given us an immune system with what can only be described as wondrous capability to learn through infection and prevent future illness. But recognizing his creation for its miraculous abilities doesn’t fit the government narrative, and so we are labeled selfish and sinful, irresponisibly vain takers of the name of Jesus by the likes of pastor Marshall, and people I know and respect applaud and “heart” the message. Others trot out their healthy kids who are barely eligible for the shot and stand a statistical zero chance of dying from COVID to virtue signal their compliance as they give their sons and daughters a shot with no idea of the long term consequences. As is their choice.

If the government has to hide or deny the science and attack the scientists, virologists and immunologists that prove recovering from COVID makes me less of a threat to my neighbor than being vaccinated then you have to ask yourself if you are exercising any discernment OR wisdom whatsoever. Are you putting your faith in holy government, or in our Holy God? Consider Second Peter, you just might ‘wrest the scriptures unto your own destruction’ and in my personal opinion, defile your temple as you do so. It is your choice unless you live paycheck to paycheck and your boss says no jab no job. But my words here are not a decree what you must do or not do, my words are merely a rebuttal to the accusation that for me to trust in Christ against the need for this experimental shot after I have already recovered with his help, is a sin.

I simply do not believe that to be true.