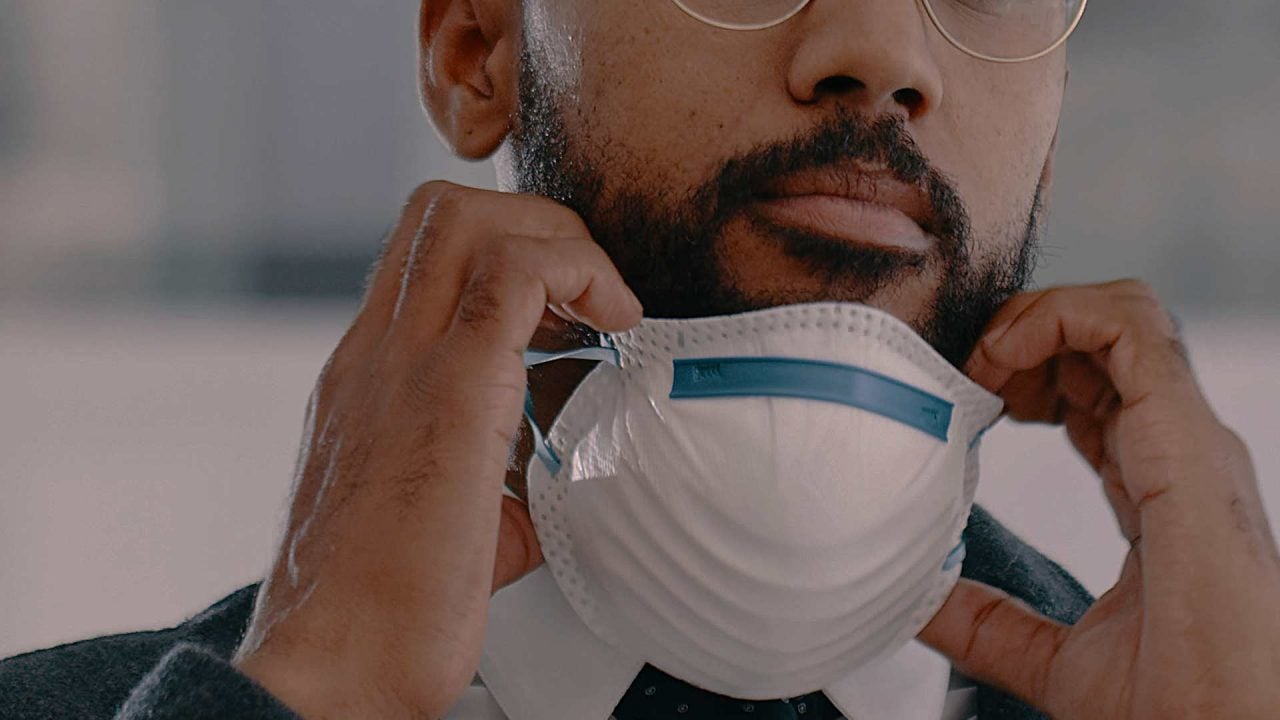 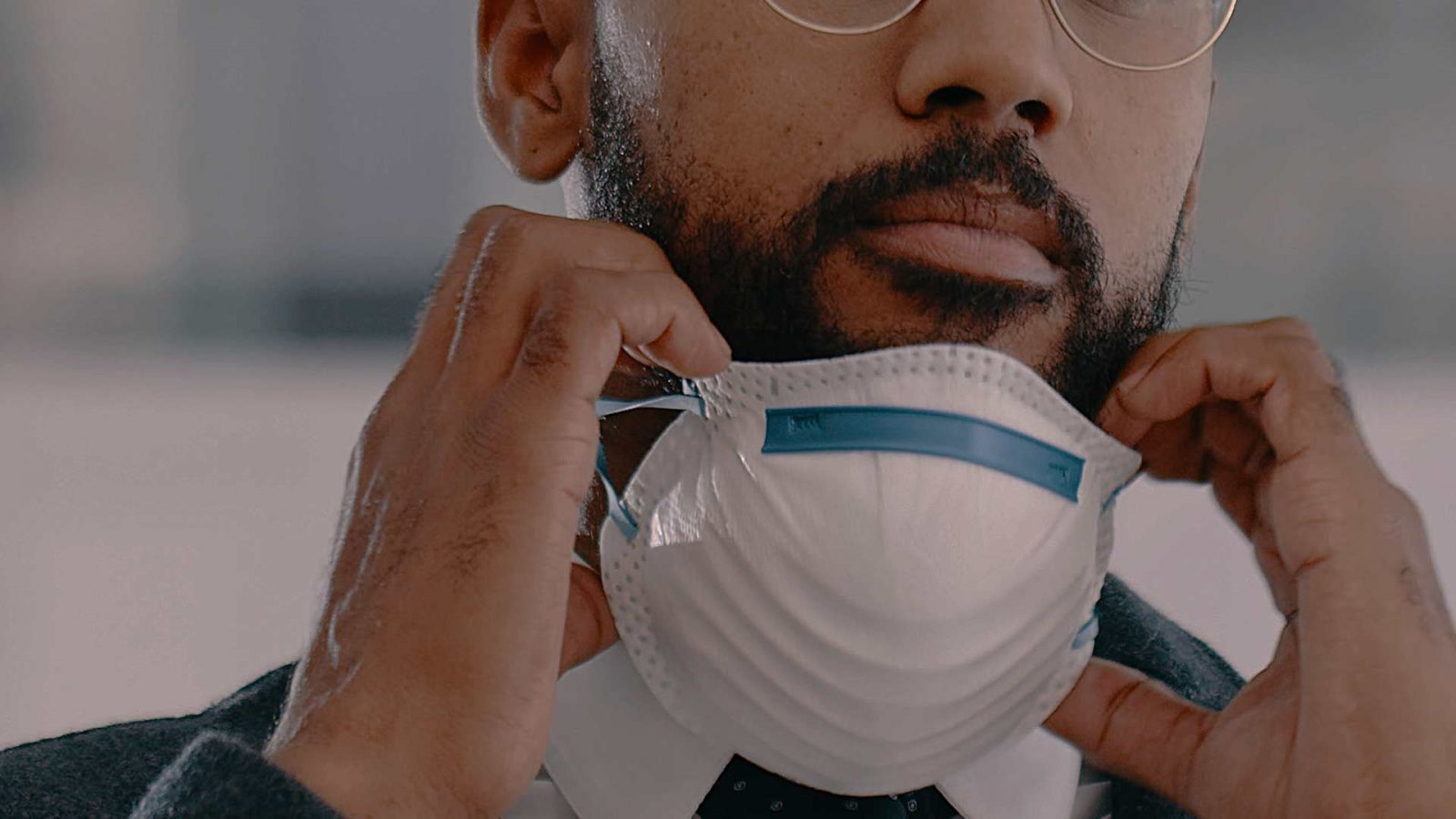 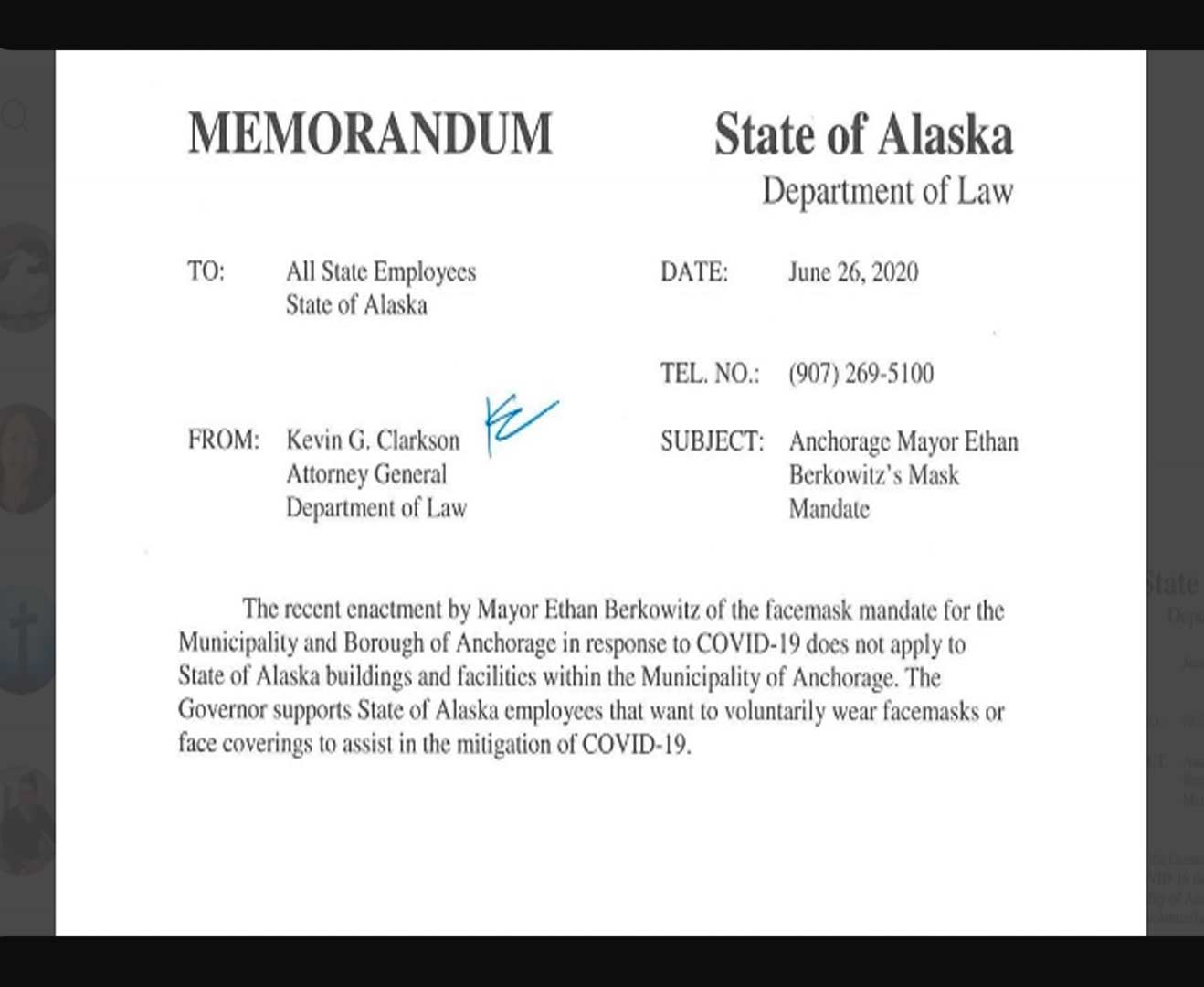 “The recent enactment by Mayor Ethan Berkowitz of the facemask mandate for the Municipality and Borough of Anchorage in response to COVID-19 does not apply to State of Alaska buildings and facilities within the Municipality of Anchorage,” Clarkson wrote in the June 26 memo.

A June 29 follow up memo from Gov. Mike Dunleavy’s office clarified that his administration has “always allowed local governments, in consultation with the state, the ability to implement health mandates based on the circumstances in a community.  Municipal health mandates and codes apply to state buildings and facilities. In this case, the Governor decided to preempt the municipal mandatory mask mandate for state buildings and facilities in the Municipality of Anchorage.”

The memo adds that the governor “encourages Alaskans to wear a face mask, in fact, it is strongly recommended under an existing mandate. The administration also actively promotes other measures like social distancing and frequent hand washing to slow or prevent the spread of the disease.”

Berkowitz and Gov. Mike Dunleavy have taken different approaches to COVID-19, with the governor preferring to trust Alaskans and rely more on recommendations and guidelines rather than enforcing health mandates under the penalty of law. For his part, Berkowitz has consistently lagged behind the state in easing mandates in Alaska’s largest city. The mayor has also reputedly emphasized that his code enforcement team is active in monitoring compliance and is prepared to issue fines.

On May 22, Dunleavy lifted nearly all state health mandates while Berkowitz followed suit and eased a number of his emergency orders while choosing to keep Anchorage under more stringent demands than the state. His latest move on June 29, to require face coverings for nearly all residents when gathered inside public buildings or businesses, has been met with widespread criticism.

According to Clarkson, Dunleavy backs state workers’ choice when it comes mask wearing.

“The Governor supports State of Alaska employees that want to voluntarily wear facemasks of face coverings to assist in the mitigation of COVID-19,” Clarkson emphasized in his memo. 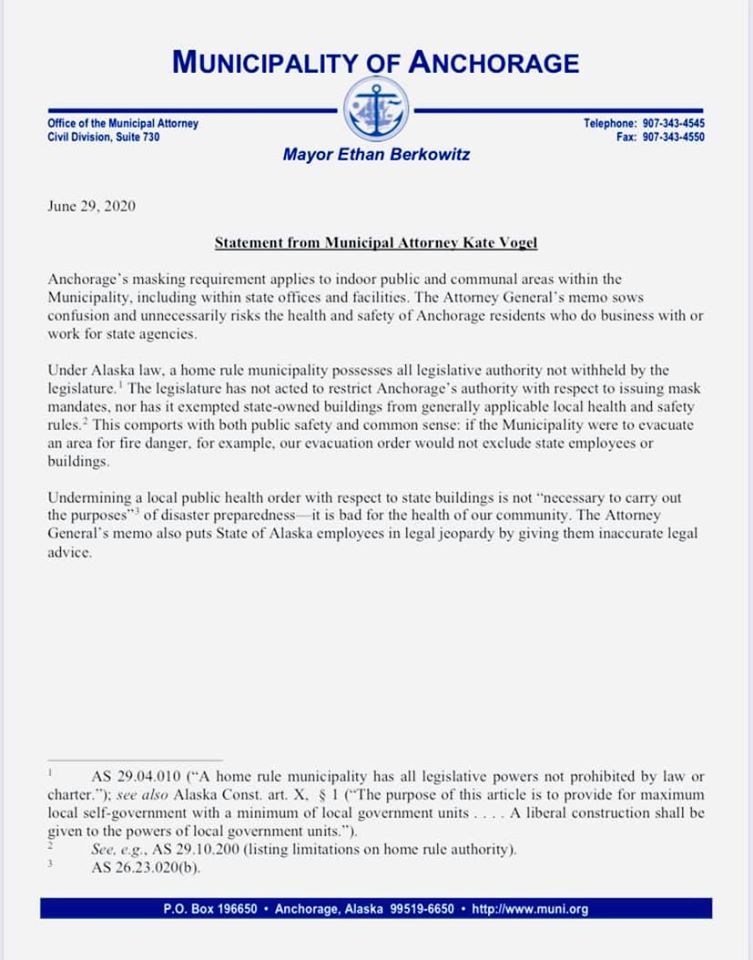 “The Attorney General’s memo sows confusion and unnecessarily risks the health and safety of Anchorage residents who do business with or work for state agencies,” Vogel claimed. “The legislature has not acted to restrict Anchorage’s authority with respect to issuing mask mandates, nor has it exempted state-owned buildings from generally applicable local health and safety rules.”

She asserted that Clarkson’s memo “puts State of Alaska employees in legal jeopardy by giving them inaccurate legal advice.”