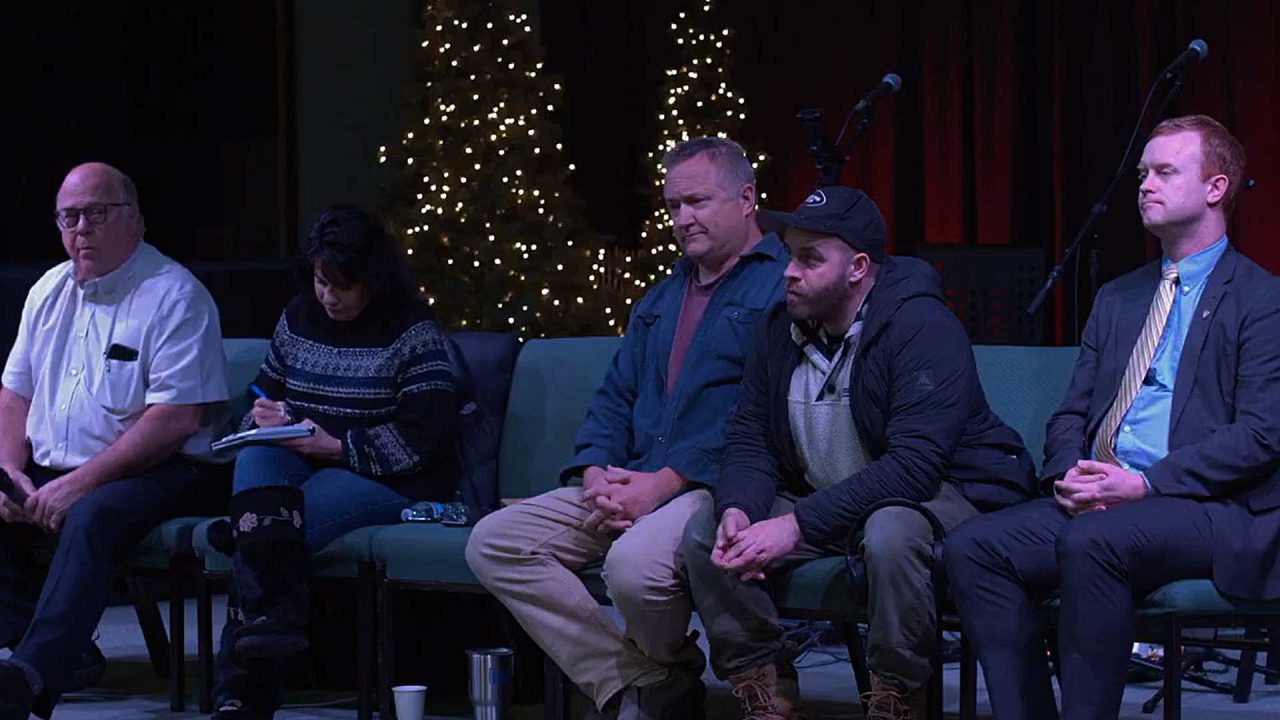 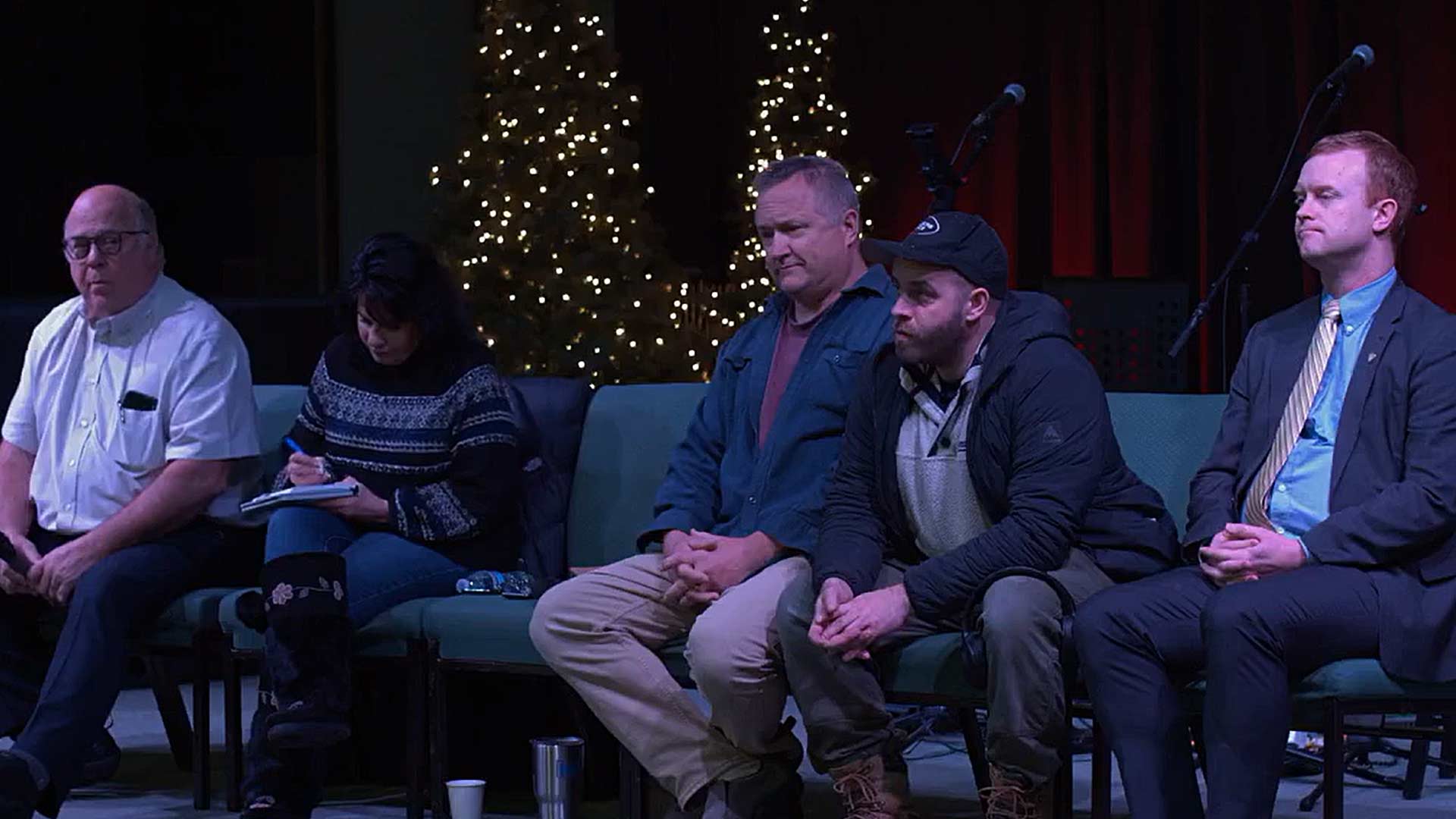 An impassioned group of Mat-Su residents braved heavy snowfall and slick roads to attend a Dec. 5 legislative townhall meeting with six of the eight state legislators from the Mat-Su.

Gathered at Real Life Church just outside Palmer, State Representatives Kevin McCabe, David Eastman and Cathy Tilton, along with George Rauscher (via teleconference) were on hand, as were Senator Mike Shower and Sen. Shelley Hughes (also appearing via conference). Rep. DeLena Johnson was not able to attend, but the most notable absence was Sen. David Wilson (R-Wasilla) who recently abandon his fellow Mat-Su Republicans to help form a Democratic controlled State Senate.

Wilson, along with seven other left-of-center Republicans are part of a 17-member Senate majority caucus which is primarily led by Democrats.

Over the course of nearly two hours, voters vented their frustrations over the inability of Senate Republicans to translate their superior numerical advantage into an actual ruling majority.

Much of that ire was directed at Sen. Wilson, who was repeatedly called a “traitor” throughout the meeting.

“I realize he’s not here, but I want this out there,” attendee Rachel Allen told lawmakers who were seated on a stage facing the audience. “Is he really a Democrat that has infiltrated the Republican party or does someone have something on him that they are holding over his head and forcing him to make decisions contrary to what his constituents voted for?”

Allen then asked whether the new Representative-elect Jesse Sumner would follow suit and abandon his fellow GOP colleagues on the House side. In particular she was concerned that Sumner had, earlier this year, donated to a group that opposed recalling three leftist Palmer City Council members.

Given this donation, Allen wanted to know where Sumner stood in terms of supporting conservative values in the State Legislature.

Sumner, who currently sits on the Mat-Su Borough Assembly, defended his decision to donate to those who opposed the Palmer recalls, saying the donation wasn’t about politics but his larger opposition to using recalls as a means of addressing political differences.

He noted that he also opposed the recall push against Gov. Mike Dunleavy.

As to whether he would align with conservative lawmakers in Juneau, Sumner said he would “stick with the experienced Valley Republicans.”

Rep. David Eastman, who has successfully run against Sumner in the past, sat right next to him during the legislative forum. Eastman asked whether Sumner considered him one of those “experienced Valley Republicans.”

Mat-Su voters have elected Eastman three times to the State House, where he is routinely marginalized by Democrats, and some Republicans, for being what they view as too uncompromisingly conservative on a range of issues.

Throughout the night, speakers urged their elected representatives to back gun-rights legislation, election integrity reforms, medical freedom safeguards, protection of the pre-born, a full statutory PFD payment and much more.

Jim Stocker was one of several speakers who called out Sen. Wilson by name, and pledged to help with an effort to recall him from office for choosing to empower Democrats.

Also on hand was Phillip Izon, who is spearheading the Alaskans for Honest Elections campaign to repeal the state’s ranked-choice voting system.

Izon used his public comments to express displeasure with Rep. Wilson and to urge attendees to support the ballot initiative to repeal ranked-choice voting.

“We know you can’t win down there. We don’t expect that,” said Mike Alexander. “But we do expect you to fight.”

Local pastor Tait Zimmerman spoke next, asking lawmakers to summon the courage to “risk their reputation and their careers” in order to stand up for what it right. He praised Rep. Eastman for upholding conservative principles even though it has cost him power and influence in the State House.

Zimmerman joined the chorus of voices denouncing Wilson, claiming that the senator had promised – in writing – to put forward a pro-life “Life at Conception Act,” but has failed to follow through.

Several others pledged to do everything in their power to oust Wilson through a recall, and blasted him for failing to attend the meeting and face his constituents.

Other testifiers suggested ways that conservative lawmakers could still make a difference, despite being outnumbered in the State Senate.

Mike Coons suggested that Mat-Su lawmakers create a coalition of like-minded legislators from both houses who would uphold potential vetoes by Gov. Dunleavy.

“We know you can’t win down there. We don’t expect that,” he said. “But we do expect you to fight.”

Overriding most vetoes require a two-thirds vote of the entire Legislature. To override a budgetary or revenue-related bill takes three-quarters of the 60-member Legislature.

In addition to upholding vetoes, Alexander told the Mat-Su delegation to publicly highlight any of their colleagues in Juneau who oppose election reform or the cleaning up of Alaska’s voter rolls.

Mike Coons leads the newly formed Concerned Conservatives of Alaska, which seeks to educate Mat-Su voters on key issues. He suggested that Mat-Su lawmakers create a coalition of like-minded legislators from both houses who would uphold potential vetoes by Gov. Dunleavy.

Sen. Mike Shower thought that was a possibility.

“I think we have the numbers to prevent the override of the governor’s veto,” he said, while acknowledging that he is frustrated by the fact that conservatives have once again been marginalized in the Legislature.

“Some of us are pretty angry, and I hear your anger,” he said. “I get it, but then there’s some of us that are overridden every time, and short of getting in the ring and putting on gloves, I don’t know what else you can do with the system right now.”

“The public outcry is what moves the needle,” Hughes said. “The sleeping giant needs to awaken.”

Rep. Eastman chimed in, explaining that it only takes 16 legislators to block efforts to override a governor veto of bills that deal with the budget or raising revenues. The key, he added, is for motivated constituents to call, email and demand that the governor use his veto pen, and that legislators back him up.

“It’s been a long time since anybody’s asked,” Eastman said.

John Miller, who is very involved in Mat-Su politics, said conservative voters must create consistent and sustained “public outcry” in order to motivate their representatives.

“That’s what’s going to change things,” he said, adding that constituents can apply far more pressure on lawmakers than fellow colleagues can.

The meeting ended with concluding remarks from each of the legislators.

Hughes indicated that it was unlikely conservative legislation would pass out of the current Senate, but she pledged to fight for Republican values despite being just one of three legislators who are not part of the majority.

She emphasized the need for voters to stay engaged.

“The public outcry is what moves the needle,” Hughes said. “The sleeping giant needs to awaken.”

Rep. Rauscher echoed these sentiments, saying backroom negotiations and offers of power and chairmanships by Democrats have consistently resulted in House Republicans failing to form a majority caucus.

Rep. Eastman said there is a larger problem with the Alaska Republican Party in general, which often does not back conservative candidates in key races.

“They literally don’t want you to mess with the status quo,” he said, adding that voters need to “engage, engage, engage … we need that pressure from good people trying to do good things.”

Rep. Tilton’s closing comments reminded attendees that one of the jobs of legislators is to stop bad legislation, which can be just as critical as passing good legislation.

Rep. McCabe wrapped up the night by taking a broader look at the frustrations conservatives are now feeling.

He said the reality is that most Alaskans don’t consider themselves Republican or Democrat.

“Keep in mind that we have to convince the undeclared or the unpartisan that the conservative movement is the way to go,” he said, before urging attendees to attend their Republican Party district meetings and to run for local leadership posts.